During Tuesday's fast-paced "Lightning Round" segment of Mad Money, one caller asked Jim Cramer his thoughts on The Original BARK Co (BARK) : "Go with Zoetis (ZTS)  or Idexx Laboratories (IDXX)  - but not BARK," was Cramer's advice. Let's check out all three names.

In this daily bar chart of BARK (which owns and operates an e-commerce website for dog owners), below, we can see that prices have been in a downtrend since late December. Prices have made lower lows and lower highs into August. The slopes of the 20-day and 50-day moving averages are negative or bearish.
The On-Balance-Volume (OBV) line declined into August but has rebounded suggesting we may be seeing the start of a reversal. The Moving Average Convergence Divergence (MACD) oscillator is improving and is just below the zero line.

In this daily Point and Figure chart of BARK, below, we can see a nearby price target and not a major upside objective. 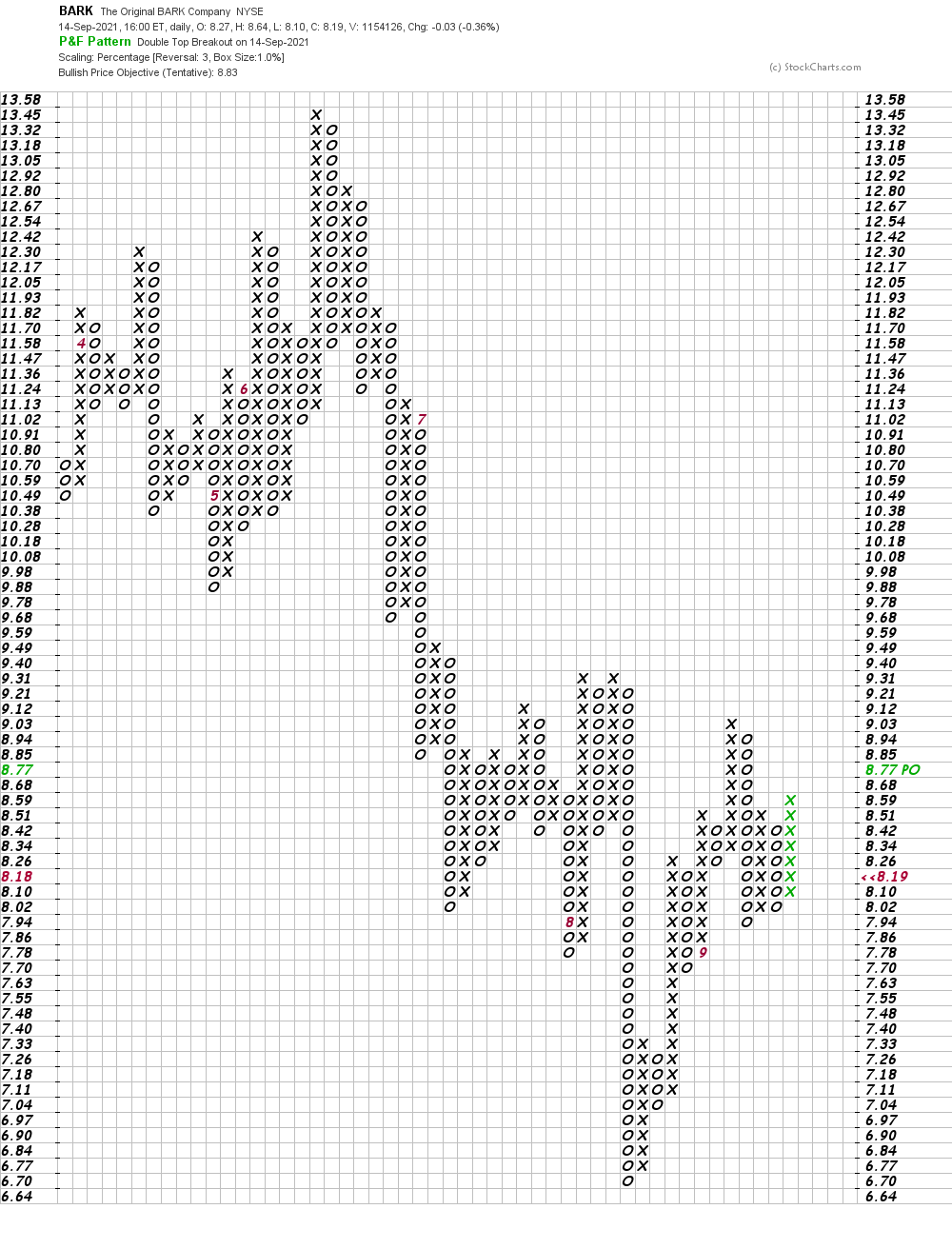 Bottom line strategy: BARK may have made a low in August but it is not showing us enough reason to be a buyer.
Now let's look at ZTS and then IDXX.
In this daily bar chart of ZTS, below, we can see that prices have staged an impressive rally from early March. Prices are still trading above the rising 50-day moving average line. The slope of the 200-day line is also positive.
The OBV line shows strength from March and a neutral pattern the past six weeks. The MACD oscillator is still above the zero line but has lost ground since mid-July.

In this weekly Japanese candlestick chart of ZTS, below, we can see a strong rally the past three years. Prices are trading above the rising 40-week moving average line.
The weekly OBV line is bullish and the MACD oscillator is pointed up but has narrowed the past month.

In this daily Point and Figure chart of ZTS, below, we can see an upside price target of $221. 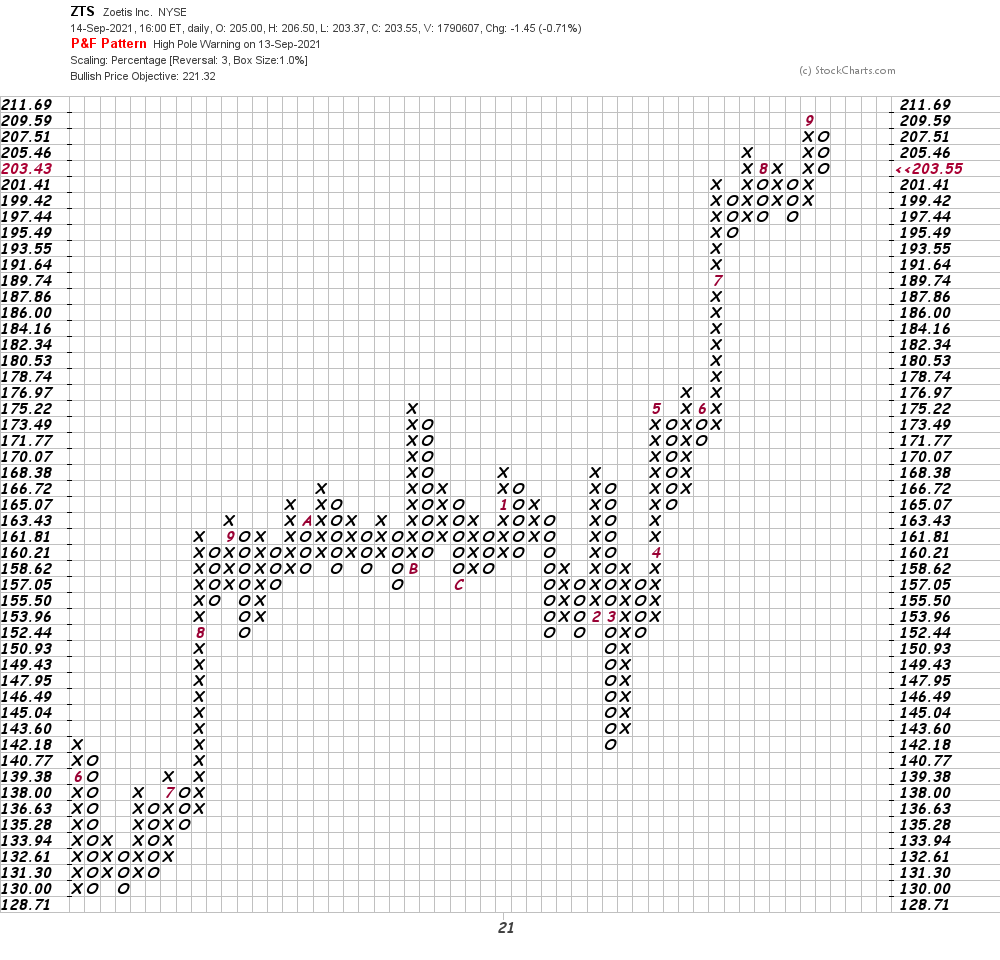 Bottom line strategy: Our three charts of ZTS, above, are aligned to the upside. I favor the long side of ZTS over purchases of BARK.
Here's IDXX.
In this daily bar chart of IDXX, below, we can see that prices have recently slipped below the 50-day moving average line. The line still has a positive slope but it is an early "heads up". The OBV line is starting to crest and the MACD oscillator is very close to crossing below the zero line.

In this weekly Japanese candlestick chart of IDXX, below, we can see two upper shadows above $700 telling us that traders rejected those highs.
The 40-week moving average line is still bullish but the weekly OBV line shows a small "down tick", while the MACD oscillator has crossed to the downside for a take profit sell signal.

In this daily Point and Figure chart of IDXX, below, we can see a potential downside price target in the $606 area. 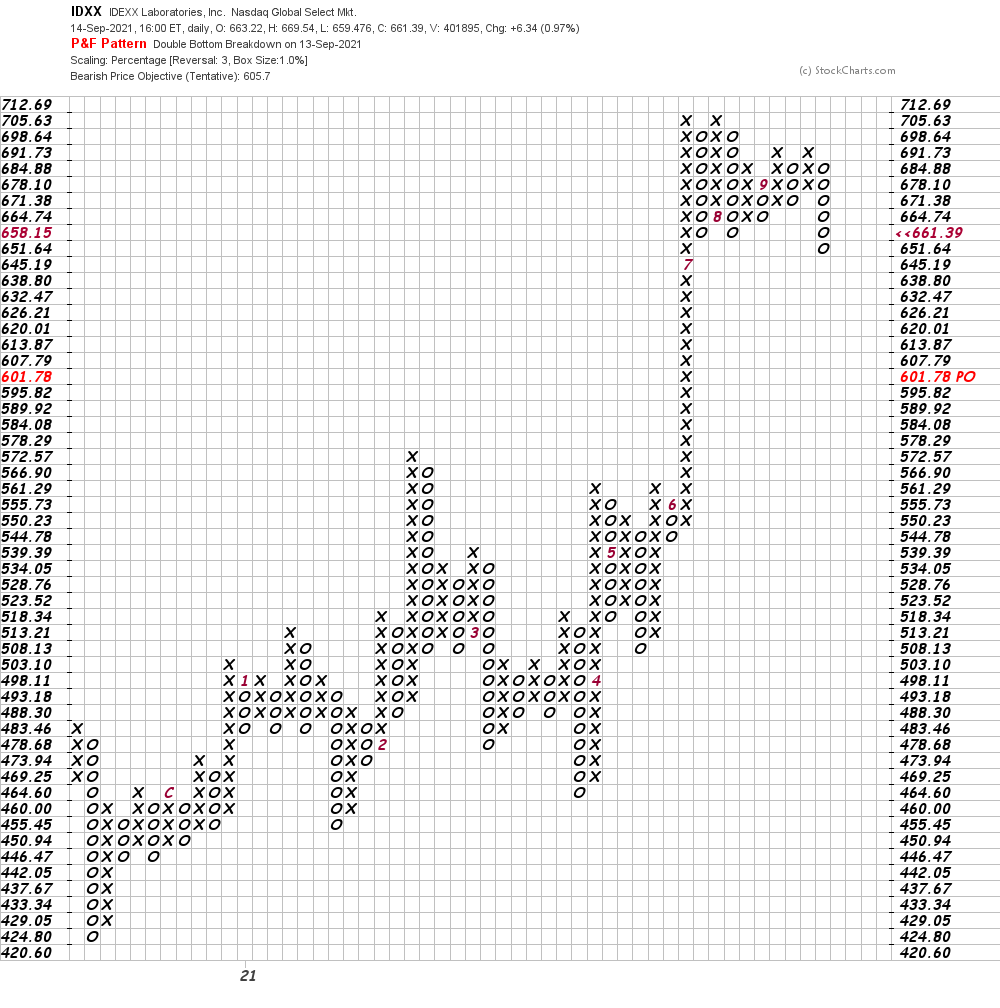 Bottom line strategy: IDXX may reach new highs in 2022 but the charts suggest a pullback is possible in the weeks ahead. ZTS looks like the stock to favor now.
Get an email alert each time I write an article for Real Money. Click the "+Follow" next to my byline to this article.
TAGS: Investing | Stocks | Technical Analysis | Trading | Pets | E-Commerce | Mad Money