Readers know full well that I have long been on the Zscaler (ZS) bandwagon. The name has long been my cybersecurity pick, since well before the pandemic drove many businesses with a labor force working from home to adopt the Zscaler Private Access (ZPA) cloud platform as a replacement for VPNs (virtual private networks) in support of the "work from anywhere" environment that has likely replaced the office building possibly forever. Then "SolarWinds" happened and demand soared all over again.

Zscaler reported the firm's fiscal second quarter performance on Thursday evening. I had added to my existing long just 11 cents above the closing price late in the session, and good thing I did. I have been adding to quite a few names on weakness this week (which I have covered in some detail all week in my Market Recon column), and it was nice to see one go the right way almost immediately after doing so.

Zscaler put an adjusted EPS of $0.10 to the tape, which beat the street by a couple of pennies. GAAP EPS sported a net loss.... $-0.50. There were several minor adjustments made, but the lion's share (46 cents) was attributable to stock-based compensation and the related payroll taxes. Revenue generation for the period soared 55% year over year, landing at $157 million, good enough to beat consensus by almost $10 million. FYI, this was the fourth consecutive quarter of not just strong, but accelerating revenue growth.

The inside numbers are as impressive as is the revenue growth. Billings increased 71% to $232 million versus estimates down around $191 million. Deferred revenue increased even faster than realized revenue, +60% to $446.8 million. Net cash from operating activities improved to $30.4 million from $5.4 million for the same period one year ago, while free cash flow improved to positive $18 million from $-1.9 million one year ago. The balance sheet has not dramatically changed over the past six months. The cash balance is down, but short-term investments are up well more than enough to make up the difference. Total assets still easily beat out total liabilities less stockholder equity. There is no reliance upon goodwill to balance the books.

Zscaler now sees fiscal Q3 revenue of $16 million to $164 million, well above the $154 million that my colleagues were looking for. For the full year, the firm now sees revenue of $634 million to $638 million, versus consensus of $612 million. As far as profitability is concerned, Zscaler guides Q3 to EOS of roughly $0.07, which is a penny shy of the street's expectations, but also guides the full year to EPS of $0.39 to $0.40, which is a penny to two pennies above the street. Full year billings are seen at $820 million to $825 million.

I won't list them unless you want it, then I'll send it to you... just use the authors tab at Real Money, but Zscaler intends to stay in front of investors so there could be news in early March. The firm is scheduled to participate in investor conferences of one type or another on March 1st, 2nd, 8th, 9th, and 12th. That's a lot in less than a two week time frame. Perhaps there is something to be said that was left unsaid last night. 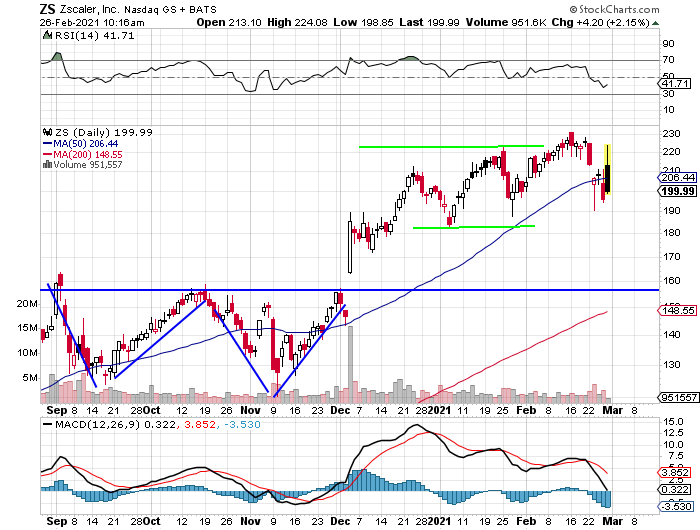 Readers will see the double bottom that led to a breakout (caution: still an unfilled gap that we have to watch) that I saw at the time I drew up my target as a basing pattern of consolidation. Hmm. I am still there, but not so sure.

What if, and this is just hypothetical... is this really just the base of a Pitchfork in its early stages? 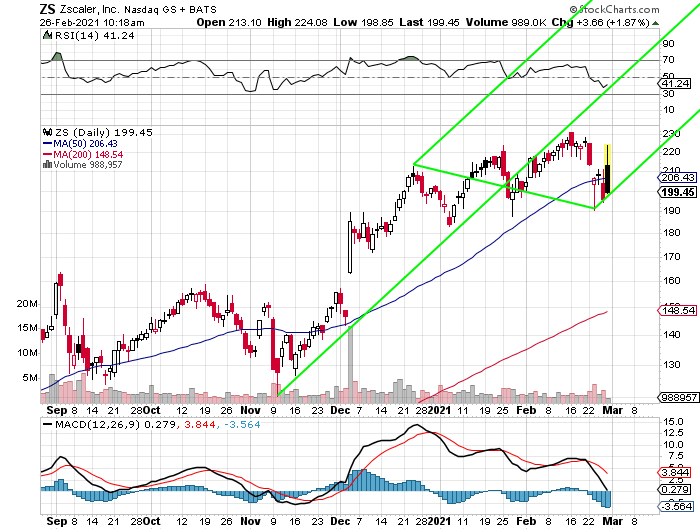 The sky's the limit in that case. I am not there yet, and there is plenty of ever improving competition, but if any industry is bound for eternally growing demand, it is cybersecurity, and right now.. in my opinion... Zscaler is best in class.

This (Friday) morning alone, I have seen five 5-star rated (TipRanks) analysts state their opinion on Zscaler. Daniel Ives of Wedbush, Michael Walker of Canaccord Genuity, Alex Henderson of Needham, and Yun Kim of Loop Capital all either reiterated or maintained "buy' ratings, while Gray Powell of BTIG upgraded the name from a "hold" to a "buy". Among these five analysts there are two price targets of $250, and three of $240. For those with an interest, my current price target is $268, off of a $224 pivot, with a $191 panic point.

On that... you now see I was buying this name as it approached panic. Might as well address that. As a name one is long approaches one's panic point, that is actually where one gets mildly aggressive. This is part of why panic points are just as important as target prices. While panic points define the spot where an investor throws in the towel on a position, it also defines just how far one will let a stock go before pulling that trigger. Does it not make sense to be a buyer at the very cheapest prices where one is willing to hold? See what I mean? It will not cost much to add and dump quickly if it goes wrong, but if a stand is made as it was last night for this stock, what an opportunity lost to be willing to hold but not buy just above where you would sell. You dig?

Sorry, This Bear Market Is Probably Only Two-Thirds Over

Here's why, even after two days of rallies, I am not moved to declare that the bear market is finished.