Go back about six months, or even two years. Almost. Not too many folks were willing to give FedEx (FDX) a pass for what looked like, and indeed was, underperformance. My, how times have changed. Suddenly, the firm has posted earnings beats for three consecutive quarters, as well as earnings and revenue growth together for two straight quarters. Two straight "blowout" quarters. Suddenly, as a planet fell into chaos, and a broad state of unpredictability... FedEx stepped it up and excelled. The world did not expect much with business to business delivery shuttered across the planet back in the spring. That should have been a negative and it was. Nor did the world expect to see the kind of explosion in e-commerce at the residential level that it saw, while fuel costs plummeted. These were decisive positives for a corporation that was ready.

On Tuesday evening, FedEx reported fiscal first quarter (period ending August 2020) adjusted EPS of $4.87, beating estimated by more than two bucks. By the way, back out the adjustment and earnings still beat by more than two bucks. Revenues generated for the quarter amounted to $19.3 billion, growth of 13.5%, and also nearly $1.75 billion better than consensus view. The real surprise was in adjusted operating margin. This line hit the tape at 8.5% versus 6.1% a year ago, when we were not fighting a novel coronavirus, and much better than the 5.25% that Wall Street was looking for.

What's the story? Business deliveries were always the lucrative end of this business. There is no doubt that this business is not where it once was, and is unpredictable going forward. The story is really one of FedEx Ground, the business unit that handles e-commerce for key customers such as Amazon (AMZN) , Walmart (WMT) and others. Sure Amazon does a lot of its own delivery, but not all. Walmart for that matter, does not touch the last mile. That's all outsourced. The public sheltered in place, and for many, will either work from home or limit visits to brick and mortar retail locations for the foreseeable future.

This is why average daily package volume for FedEx Ground popped 31% for the quarter. Yes, residential delivery is tougher on margin. Each package pays less, and that last mile can get pretty far flung. That's where cheaper fuel, and the initiatives that management had taken to contain expenses come in. Suddenly, and rather unexpectedly... margin grew. Voila! For confirmation of trend, key competitor United Parcel Service (UPS) reports in about a month.

Once again, the firm declined to provide full year earnings guidance. Some investors may not like that, but I think it is completely understandable given this environment. The firm did allow that annual capital spending will likely rise to $5.1 billion, which is above the expectation of $4.96 billion. Perhaps more importantly, on Tuesday night in regards to the short to medium term future, CEO Fred Smith did say "detailed planning is under way at FedEx to distribute vaccines at scale worldwide once approved." Smith said this as the firm revealed what will be the launch of FedEx SenseAware ID. This will be an enhanced tracking and security censor that will be a key to large distribution of anticipated vaccines and/or therapeutics in the fight against Covid-19.

We know what developed economies have been paying biotechs and pharmaceutical corporations that have been working on solutions to this global problem. We know that militaries will be mobilized to provide logistic capabilities to the effort. They are not large enough on their own. Not even close. There are almost eight billion people on this planet. They are massed in great cities and they are hidden in every nook and cranny. Increased logistical capability will be costly, but will be an expense as necessary as has been the science. Once there are safe and effective solutions that need to get to hospitals and clinics around the world, you may not get your Cheerios in a timely fashion. 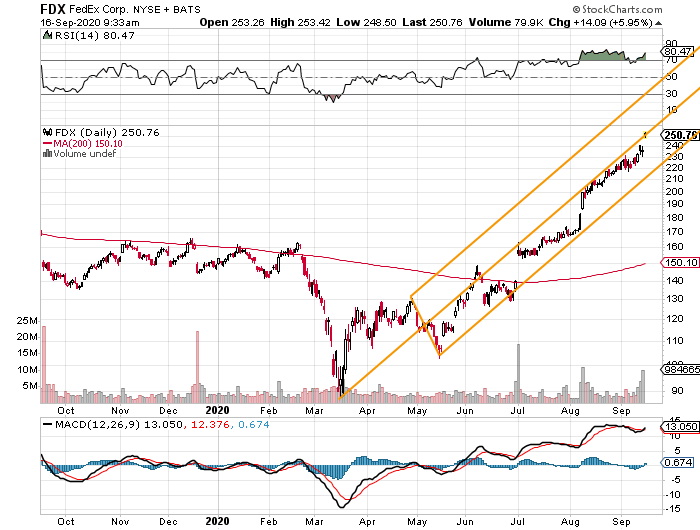 After having resided in the lower chamber of our Pitchfork model for most of the past six months, the shares are trying to break into the upper chamber on Wednesday morning. Since Tuesday night, I have noticed 10 sell-side analysts opine on FedEx. There are nine 'buys" (or equivalents), and there is one "hold" or equivalent. The average target price of those 10 opinions is $280.80, with a high of $300 (two of those), and a low of $240 (the hold). The median of the buy ratings comes with a target of $286.

What the shares do around that central trend line is key. Personally, I would rather buy these shares (I am flat) on momentum off of support that makes use of that line. Should that line fail, then I think I can get a few shares in the mid-$240's and maybe try to scale in. As to the options markets, I think it is a bit dangerous to sell puts trading off of stocks priced in triple digits. That said, if you believe that vaccines might be distributed in calendar year 2020, a FDX January 15th $250/$280 bull call spread is getting to the point where the net debit might ease it's way under $10. That might be worthy of the risk. Just my opinion.

Get an email alert each time I write an article for Real Money. Click the "+Follow" next to my byline to this article.
TAGS: Earnings | Economy | Investing | Options | Stocks | Technical Analysis | Trading | Transportation | Coronavirus