While everyone is focused on oil and gold, there's some solid action in the software and cybersecurity space. The cybersecurity concern fits. Not all attacks, terroristic or otherwise, come in the form of physicality any longer. Sometimes more damage can be done with technology.

CrowdStrike (CRWD) is a name in this space that has my interest. The company combines the cloud and artificial intelligence to create the first cloud-native Endpoint Security platform. The platform uses a smart filtering agent along with high fidelity data to establish a baseline, detect anomalies, and conclude if those equate to a threat. Like most AI-based programs, the more data it gets the smarter the decisions it makes. According to CrowdStrike, they capture 2.5 trillion events per week.

Over the past year, it's grown its client base 112% to 4,561 customers which includes 44 of the Fortune 100, nine of the top 20 banks, and 37 of the top global 100 companies. The most impressive financial number arguably is the 127% dollar-based net retention rate. Customer count is not only growing, but customers are spending more from year-to-year to the tune of $1.27 for every $1 of the prior year. Although the company only projects FY2020 revenue to hit $466.6 million (midpoint), the annual revenue run rate is on pace to exceed $500 million thanks to near 100% growth rates in subscription revenue and annual recurring revenue.

While CrowdStrike will tout a total addressable market around $29 billion, it's not realistic to believe a single company will control an entire market. Still, the potential exists for the company to maintain a growth rate between 50% and 100% for the next half-decade. 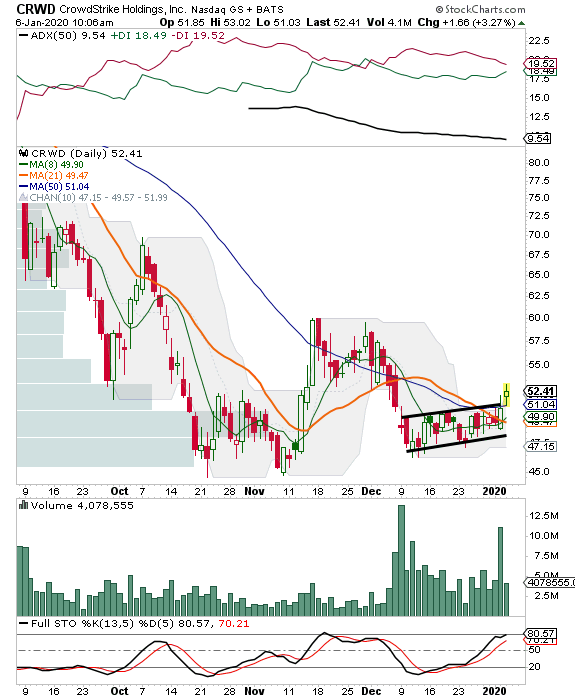 After a rough fall/winter price performance, shares appear to be on the mend. Heading into the holidays, CrowdStrike appeared at risk to extend its downside because of a bearish head and shoulders pattern. Rather than breaking down, the stock appears to be breaking out to begin 2020. The recent right shoulder has been slowly making higher lows and higher highs, trading in a tight channel. With today's move, we have a clear stop in play at $47.50, however, there is now higher support at $51 with the breakout. The stock should make a quick move to $55, but I think the bulls will push this into the $57.50 to $60 area by the end of Q1, if not Valentine's Day. The biggest risk will be the next earnings report estimated to be in the first half of March, but that gives bulls plenty of time to hit the upside target.

So, while the chatter focuses around oil and gold, cybersecurity offers an under-the-radar approach to play the Middle East tensions.

Get an email alert each time I write an article for Real Money. Click the "+Follow" next to my byline to this article.
TAGS: Investing | Markets | Stocks | Technical Analysis | Trading | Cybersecurity | Technology | Middle East