Time to strike? Hi. Me again. It was a Monday night. August 23rd. Palo Alto Networks (PANW) reported the firm's fiscal fourth quarter performance. The frim beat on earnings, revenue and billings. Furthermore, they guided forward performance across all three metrics for the coming full year that was above consensus. The same night, Nasdaq announced that CrowdStrike (CRWD) would become a component of the Nasdaq 100 index, the Nasdaq 100 Equal Weighted Index, and the Nasdaq 100 Technology index, replacing Maxim Integrated Products in all three indices as that firm had been acquired by Analog Devices (ADI) .

The stock blasted off on Tuesday of that week. The entire cybersecurity group took off. I had come in long Palo Alto as well as Zscaler (ZS) , and CrowdStrike. Oh happy day. Profits I did take. I was like Scrooge McDuck. Simple. I'll buy these stocks back after they cool off. Just one thing. What if they just don't cool off?

CrowdStrike reports the firm's second quarter financial performance tonight (Tuesday, Aug 31st). I can find 23 sell-side analysts that cover CrowdStrike. Consensus view is for adjusted EPS of $0.09 on revenue of $323.5 million, which in year over year percentage terms would amount to three figure earnings growth on revenue growth of 62.6%. Though these numbers seem gaudy, they represent a deceleration of that growth since CrowdStrike showed up back in 2019.

Of those 23 analysts, 20 have revised higher their expectations for both earnings and revenue at some point over the past three months, while exactly zero revised anything lower. The range of expectations for adjusted earnings runs from $0.07 to $0.13, while that range for revenue generation spans from $319 million to $335 million. EPS whispers are running three to four cents above consensus. Wall Street is also looking for subscription revenue, which is easily where the lion's share of the firm's sales are distributed... of more than $302 million.

Everything and everyone from households to public works to businesses to governments need to protect themselves and their sensitive information against both intrusion and theft. I like CrowdStrike, as CrowdStrike is end to end, and cloud based. I like Zscaler for much the same reason. In fact the two compliment each other well, and some businesses employ both side by side. Palo Alto is more old-school as it is more on premise than these two. Zscaler reports in a couple of weeks. CrowdStrike tonight. How to get back to these names? Should I even get back in these names as they have run... and run into earnings. I have never liked that.

So, let's think. CrowdStrike trades at an absurd forward looking PE ratio (as does ZS). That said, the balance sheet is strong. The current ratio is fine. "Only" 5% of the float is held short. Not that 5% is tiny, but it's not 8% which is where I start paying attention. 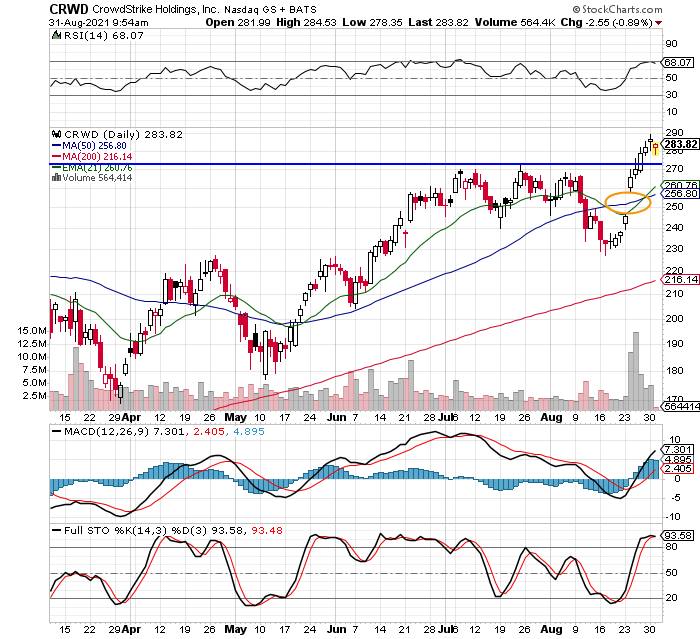 The Full Stochastics Oscillator is screaming "overbought" at the reader. The Relative Strength Index isn't screaming, but is nodding in agreement. The daily MACD is stretched. I have to think that this stock comes in regardless of how great earnings are.

I look to add perhaps for a first tranche up at former resistance (blue line), which is about $272, but more so down at the still unfilled gap created in mid-August between $239 and $258.

First, if it wants to keep going, you know the Disney (DIS) song... "Let it go, Let it go", however if the shares want to come to me, I have a plan.

- Purchase first tranche (1/8 of intended position) in response to earnings with a $272 limit bid.

Note: Trader is willing to buy something at his or her level only on a dip, while accepting short-term equity risk at both the top and bottom of the unfilled gap for a premium paid.

Get an email alert each time I write an article for Real Money. Click the "+Follow" next to my byline to this article.
TAGS: Earnings | Investing | Markets | Stocks | Technical Analysis | Terrorism | Trading | Cybersecurity