The headlines rolled by on Saturday morning. Tesla (TSLA) planned to recall 285K vehicles (all Models 3 and Y) in China due to issues with the cruise control feature. Apparently more than 249K of these vehicles were manufactured in China, while more than 35K were imported into the country.

The website for China's State Administration for Market Regulation explained that the recall is linked to an assisted driving function - cruise control - that could cause these vehicles to suddenly accelerate if activated accidentally.

The "fix" is software based and can be done online remotely. The question is really one of if this "black eye" is significant enough to damage the firm's reputation in China, which is of course a key market for Tesla needed to meet all of the firm's longer term goals, but also a market that has developed a number of domestic competitors in the field such as NIO  (NIO) , XPeng (XPEV) , and Li Auto (LI) .

Wedbush five star (rated by TipRanks) analyst Daniel Ives, who is elite even among his five-star rated colleagues, responded to this news on Sunday by maintaining his "buy" rating on the stock of Tesla with a target price of $1,000. Ives is the only sell-side analyst that I have seen opine on Tesla since this news broke. Last week, Adam Jonas of Morgan Stanley (5 stars) and Mark Delaney of Goldman Sachs (4 stars) both put in their two cents with "buy" ratings and target prices of $900 and $860, respectively.

Ives was quoted in Barron's over the weekend stating that after what was seen as a disastrous start to the quarter for Tesla in China that "... the street is reading the tea leaves as bullish for the month of June with momentum into [the second half]. Ives sees 900K deliveries as still being a potential 2021 reality. This would be greatly increased from the 500K vehicles delivered in 2020, and well above the 825K or so vehicles that seem to be industry consensus.

Don't forget that Dan Ives and much of Wall Street expects Tesla to benefit from the Biden administration's pivot towards cleaner greener energy and that any inclusion of charging stations for EVs (electric vehicles) that might be included in the currently under negotiation infrastructure bill, would remove one more reason for new car buyers to hold off on "going electric."

While those upcoming numbers for deliveries are due as soon as this Thursday, July 1st, and that seems to be the driver for the suddenly reiterated bullishness coming from some of the the higher rated analysts following this stock, it will quite obviously be for the rest of us, a tradable event.

In addition, tomorrow... Tuesday June 29th close to mid-day, Tesla CEO Elon Musk will speak at the Mobile World Congress in his capacity as Chief Engineer of the still not publicly traded SpaceX. One never knows where Elon goes. Will he veer off? Speak of Tesla? Speak of a potential spin-off of Starlink, where Tesla shareholders would get a priority allocation? Let you know tomorrow. 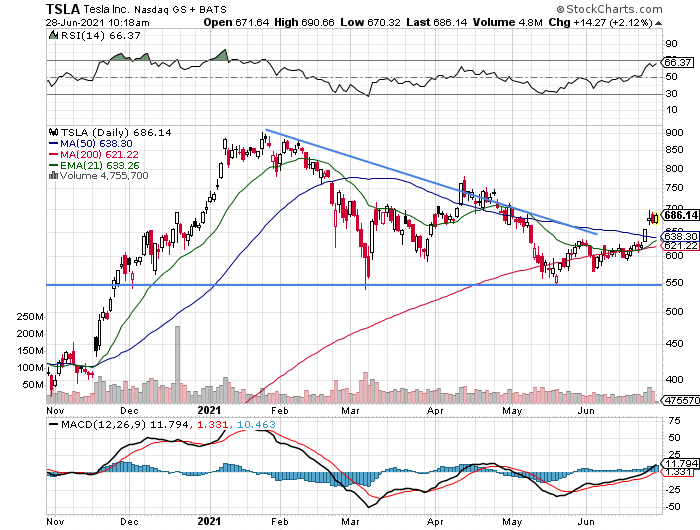 Readers will see that TSLA broke out of a forming descending triangle to the upside, which is usually a bearish pattern. Some readers/viewers will recall that in early June I told TheStreet's Katherine Ross that I could not buy TSLA unless the stock could retake it's own 200 day SMA (then $602), as the shares were mired in what looked to be a period of weakness.

Well, the shares did retake that red line and I did grab a few for a trade, which I still hold. So, what now? What's the plan?

I am not selling anything on the China news. This is too small to be an investment, so I have to treat it like a trade. I will probably sell later this week after these two potential catalysts pass. While I would love to add and ride, that is not what trading is about. Trading is about ringing the register, and that's what I will do after I see the firm's delivery numbers and there is a reaction in the share price.

Get an email alert each time I write an article for Real Money. Click the "+Follow" next to my byline to this article.
TAGS: Investing | Markets | Stocks | Technical Analysis | Trading | Automotive | China | Electric Vehicles