Tuesday after the bell, Micron Technology (MU) posted better than expected earnings. The company's bottom line, boosted by favorable tax benefits, landed at $1.05, well ahead of the $0.83 estimate. Revenue of $4.79 billion inched above consensus of $4.77 billion, but it is fair to note that Micron's revenue would have been closer to $5 billion had it not been for challenges associated with Huawei.

Although Micron has resumed shipments to Huawei, guidance for its 4th quarter came in well shy of consensus. Keybanc declared it only "modestly below" consensus, but revenue of $4.5 billion was against estimates of $4.9 billion and earnings of $0.45 against expectations of $0.78. The company did just post EPS $0.22 better than expectations, so the net out isn't terrible. Some whispers had Micron losing money next quarter, so this number is a huge relief for those folks.

The stock received more lowered price targets than upgrades or raised price targets, so while expectations that the business isn't as bad as some believed doesn't equate to an all-clear sign in terms of valuation. The big question comes in the form of when inventory will clear and prices for NAND and DRAM will bottom, then turn higher. While best guesses point towards the 2H19 as a turning point for NAND with DRAM to follow a quarter or two later, Micron still has several headwinds.

The company may have to overcome tariffs, weakness in China, a reboot of the Huawei ban, gross margin declines to clear inventory, and Intel CPU shortages. The hope is the transition to 128 layer replacement gate technology will swing sentiment along with a recovery in cloud and graphics. That's a lot to digest. The relief today gets us to prices of five to six weeks ago, but where do we go from here. For that, I'm keying on the technical picture.

The weekly technical picture hints at a wide trading range for the second half of 2019. Resistance at $42.50 and support around $32.50 puts us practically in the middle. Unfortunately, the middle doesn't provide much edge for buying or selling. Furthermore, the stock is hanging around the 21-week simple moving average (SMA), which has been a key point for the past 18 months.

Secondary indicators lean bullish today with the StochRSI crossing above a key moving average and the Full Stochastics looking to bottom. We don't have a trigger in the second indicator yet and it is important to remember we are still in the middle of the trading week. A fade or a strong push in price into the end of the week could change the picture we see here in the secondary indicators. It won't, however, change the wider price pattern. 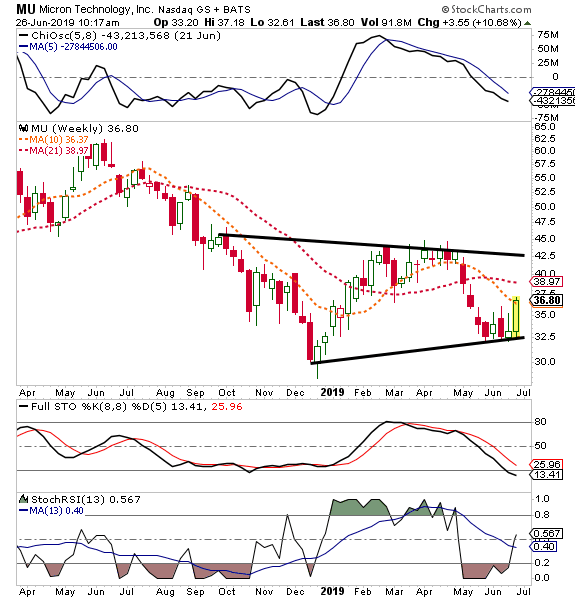 I think there may be an options trade opportunity here as well which is up on Real Money Pro.

Get an email alert each time I write an article for Real Money. Click the "+Follow" next to my byline to this article.
TAGS: Investing | Markets | Stocks | Technical Analysis | Trading | Semiconductors & Semiconductor Equipment | Technology | China | Stock of the Day