As a New York Mets fan, I never had the love for Don Mattingly that my Yankee fan counterparts had always shown. As a baseball fan, how can one not simply admire the ballplayer nicknamed "Donnie Baseball"? Mattingly had to beat out a real slugger in Steve "Bye Bye" Balboni for a roster spot in his rookie year, and managed to do just that. The man could hit for average, hit for power, and play flawless defense at first base. Then the best part. The man injured his back. Statistically, over the second half of his playing career, Mattingly showed a level of "true grit" not seen everyday in modern sport. Donnie was a gamer, and in my opinion, became an elite level manager.

Microsoft (MSFT) might be an information technology version of Don Mattlingly. Spectacular level of dominance through the early years of the firm's existence, followed by some tougher years that forced the firm to relearn the game, only to return to a very high level of execution doing something completely different.

On Wednesday evening, Microsoft went to the tape with the firm's fiscal first quarter financial results. The firm posted EPS of $1.38 on revenue generation of $33.1 billion. Both lines significantly beat Wall Street's expectations, while that top line number was good enough for year over year growth of 13.7%.

Breaking down performance across business lines it quickly becomes apparent to even the most casual of observers that CEO Satya Nadella has this firm executing on all cylinders. Let's dig in.

The Productivity and Business Process segment contributed $11.08 billion in revenue, slightly beating expectations, while growing 15% from the same period last year. This is the part of the business that includes Office, Dynamics and most importantly... LinkedIn. In isolation, LinkedIn grew 22%.

The Intelligent Cloud segment posted revenue of $10.85 billion, far above expectations, and good for growth of 29%. Azure is the standout in this group at growth of 59%. Now that growth is down from the gaudy growth of 76% that Azure enjoyed last year, but let's keep that in perspective. At that point, the main competition for that business was Amazon's (AMZN) AWS, and it still is, But Alphabet's (GOOGL) Google Cloud has become a significant third competitor in this space, and has hired help from the ranks of Microsoft to get where they are going. Call me biased, as I am a shareholder, but in a three horse race, I like 59% just fine.

The More Personal Computing group made a contribution of $11.1 billion. Even though this is more of a legacy business line that includes the likes of Windows, Surface laptops, and the Xbox gaming system, this was still good enough for 4% growth.

Notice how evenly distributed the contribution made by the segments to the whole have been. This is what consistency looks like. Now, Wall Street also tracks Microsoft's "Commercial Cloud", which the firm does not recognize officially as a business segment, but does include several high profile producers such as Azure, and Office 365. That unofficial grouping showed annual growth of 36%.

The firm ended the quarter with a cash position of $13.1 billion, and short-term investments of $123.5 billion. That last number is not a misprint. The long-term debt position runs at $66.5 billion. Operating income expanded by 27%, while net income realized a 21% boost. Operating expenses grew by 9%, but the focus is where it should be... on growth and margin.

Are the shares priced for perfection at 24 times forward looking earnings? Perhaps, but at what price consistent earnings growth of more than 20% on sustained revenue growth in the middle teens, percentage wise? Let's not forget the firm's already authorized a $40 billion share repurchase that comes with no expiration date. 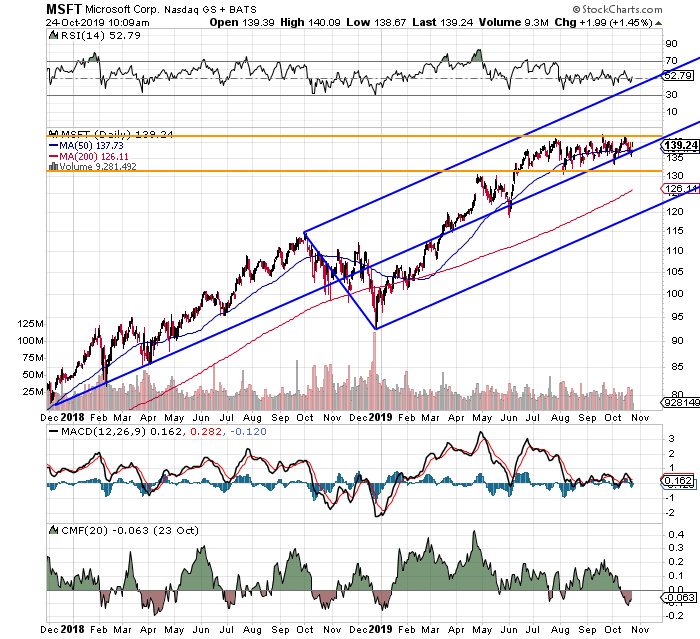 As one sees on this nearly two year chart the underlying technicals such as Relative Strength, daily MACD, and Money Flow all leave room for upside. At the current last sale, support at the central line of this Pitchfork model which I drew up for you a very long time ago remains very much intact.

Do I buy more today? Probably not. Though unrealistic this morning, I would love to add at the 200 day SMA down at $126. The shares need $142 to threaten a breakout of the June through present basing pattern.

(Microsoft, Amazon and Alphabet are holdings in Jim Cramer's Action Alerts PLUS member club. Want to be alerted before Jim Cramer buys or sells these stocks? Learn more now.)