Sometimes, the post-earnings action in a stock later in the day or over the next few days is more telling than the initial pop or drop. That initial reaction can often be an overreaction to traders with FOMO (fear of missing out), momentum only traders, or traders out of position. That appears to be the case with fuboTV (FUBO) .

After reporting earnings Tuesday after the bell, shares rallied from the mid $15 level to above $20 per share. For those not familiar with FUBO, it is a skinny bundle (think niche) streaming service with a focus on live sporting events. As one already knows, live sporting events have been fewer and far between in 2020, but as they've come back into play, they've done so with no or limited spectators. While FUBO does offer more than just sports as shown by its agreement with Disney (DIS) to not only stream all of the ESPN offerings, but also ABC, Freeform, FX, and DisneyTV.

While the company's loss of $1.65 in the 3rd quarter was $1.28 worse than expected, revenue of $61.2 million crushed expectations of $53.89 million. FUBO ended the quarter with 455,000 paid subs. At the end of the second quarter, projections for subs topped out at 350,000. Yes, there was likely some pull forward, but unless we see churn, having the subs on a quarter earlier than expected isn't a negative.

Ad revenue is skyrocketing, albeit still a small part of revenue, but 152%, double last quarter, with a higher average price is a glimpse at the future. They did benefit from political ads which isn't something that will last. That's an asterisk worth noting. Currently, the company is posting organic growth twice that of larger competitors like  (ROKU) . The biggest potential here is the opportunity to mix wagering in with live streaming sports. It's coming. The question is when not if.

Despite a bright future, FUBO faded hard from the $20 level yesterday. Shares are now precariously above the pre-earnings closing high. For those that wanted in the name and missed out, this is where you expect to see a bounce. It makes for an intriguing level to enter half a position with the other half coming from either a lower level or a reversal higher. The lower level key would be the ascending support line of the triangle pattern pre-earnings. A reversal buy would be on a break over $16.50. 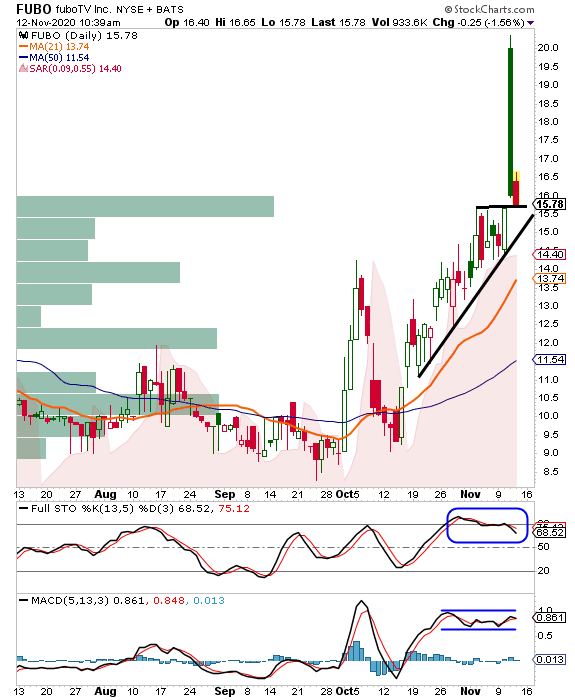 That being said, a close under $15.70 is demoralizing for bulls. A close under $15.20 and the 21-day simple moving average (SMA) is in play here around $13.75. Essentially, the market is telling us FUBO got ahead of itself. We have a lot of trapped buyers above and some throwing in the towel today. Long-term, I find the name extremely interesting. Short-term, I find the stock extremely risky.

Get an email alert each time I write an article for Real Money. Click the "+Follow" next to my byline to this article.
TAGS: Earnings | Investing | Options | Stocks | Technical Analysis | Trading | Media | Television Production/Distribution | Sports

So now what? The usual folks are already talking about whether or not this is a bottom.

Let's check to see if these gains by the biotech can be sustained.

General Motors pulls back for a retest of the June/July lows.

Netflix Gets an Upgrade, But I Won't Be Running Up That Hill

The shares have traded sideways the past two months.