Amazon (AMZN) couldn't help themselves, and why not. After all, the firm did have something to boast on. How often did that little blue van with the smile painted on the side stop on your block this holiday season? My bet is that you stopped counting at least a month ago, or maybe just tried to leave a spot for the poor folks driving those vans.

For the season, according to data provided by Mastercard (MA) Spending Pulse, e-commerce broadly increased by 18.8% over 2018, despite fewer core shopping days in between Thanksgiving and Christmas in 2019. Overall, across mediums, retail sales (ex-autos) for the season increased 3.4%. In store purchases? Glad you asked. No, not in overt decline, but growth printed at 1.2%, meaning that for the season, e-commerce accounted for a 14.6% market share. Remember the all-important 10% threshold? Probably not going to see that number ever again, but that's just my own conjecture. Department stores? Whoo doggie, that is where actual contraction does live, at -1.8%.

Those that follow me closely know that I keep track anecdotally of several factors across this space, including parking spaces at malls, square footage versus visible customer interest, and pricing. I made my last trip to the flagship Macy's (M) location up at 34th Street in NYC on Friday. Yes, that day, the crowds in that store were overwhelming, and that's a solid, but, it took that long. Prior trips (roughly every two weeks) had left me concerned.

After Amazon had basically told third party sellers to stop using FedEx (FDX) Ground due to performance related issues, I wondered just what was going on. I noticed an increase, at least to my home in the use of the U.S. Postal Service for my family's e-purchase deliveries. United Parcel Service (UPS) has already told us that the firm expects to see record year end volumes... and this is in addition to that little blue van that never seems to stop moving.

As for equity performance. The S&P 500 is now up 29% year to date, the Nasdaq Composite 35%. Amazon? "Just 19%". On shorter timelines, the comparison is worse. Amazon is up 3% over the past quarter, while the S&P 500 has run 8%, and the Nasdaq Composite a screaming 11%. The reasons? An earnings miss caused by contracting margins based on several factors including spending on new markets as well as building up the firm's delivery capabilities, not to mention advances made by Microsoft's (MSFT) Azure versus Amazon's AWS.

The points that I think we have to see here are several fold. For one, Amazon states that fulfillment from Amazon pickup points were up 60% year over year. Secondly, the firm states without specifying exactly when, that five million customers started new Prime membership (either paid of free trial) in one week. That's $119 in recurring revenue, potentially (remember, that's just one week) for every one of those five million who does not cancel. I have known one person in my life who has canceled a Prime membership. Thirdly, the firm also states that the total number of items delivered through Prime one day and same day delivery quadrupled this holiday season versus last.

I know you're following here. So, the problem last quarter was margin, right. What are Amazon's truly high margin businesses? Web services (the business cloud), and advertising sales, right? How does Amazon drive advertising? Through the e-commerce site. Still here? So, the firm is still finding ways to aggressively drive eyeballs precisely where the firm has something highly profitable to sell.

What has been a margin killer for the firm? Free and cheap delivery, right? Well, that's what the expenses were all about. Building independent capability in order to reduce external reliance. It would appear that the early loser here would be FedEx. This recent move could also help the firm with pricing power over bulk delivery granted externally.

The threat there would be key retailers like Walmart (WMT) and Target (TGT) , who both while attempting to take market share in e-commerce could also end up driving higher demand for external delivery services. The last mile, often distributed through local delivery operations, is the toughest nut to crack.

All that said, it appears at least to this simple mind that Amazon knows what it is trying to do, and is doing precisely what it needs to do to get there. I have no position in the name, and have not for a few months. I do believe that Amazon is a long term buy, and even if political pressure does build to break the firm up into smaller pieces, that would be in the end a positive for shareholders. It's now a matter of re-entry for me. 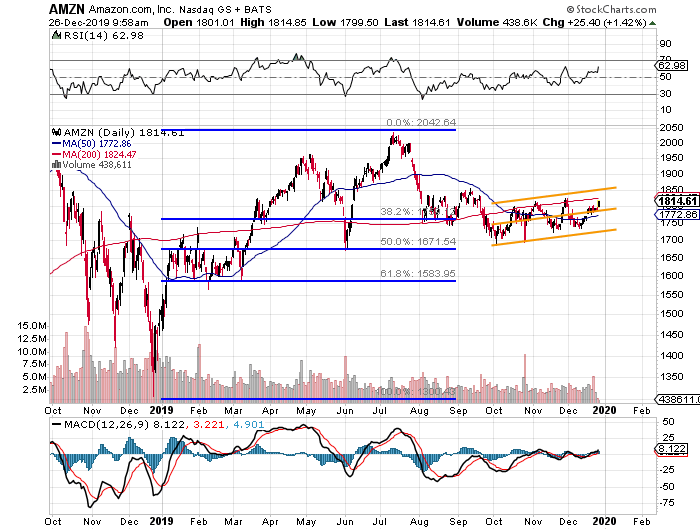 The shares are already up almost $30 today (Thursday) as I finish up this piece. That puts the shares at a rough $1821. The 200 day SMA stands at $1824. That line now becomes crucial. That will either be where resistance is found, or portfolio managers will join the chase forming a sort of catapult.

Thinking Just For me

I would, not that I have missed today's move, rather buy this name on momentum on a break above that 200 day line than buy it with the shares up this much, but still on the southern side of that divide. Without a take and hold of that line, I'll wait for a return to the central trend line around $1800.

(Amazon, Mastercard, and Microsoft are holdings in Jim Cramer's Action Alerts PLUS member club. Want to be alerted before Jim Cramer buys or sells these stocks? Learn more now.)

Get an email alert each time I write an article for Real Money. Click the "+Follow" next to my byline to this article.
TAGS: Economy | Investing | Stocks | Technical Analysis | Trading | E-Commerce | Stock of the Day