We've had quite a decent oversold rally since last Thursday. According to my work, we are not yet overbought. It's too soon to say when we might be overbought again, but I would say at this point it looks as though it could be midweek next week. But we won't know for a few more days.

But what of the Oscillator? Take a look at the New York Stock Exchange Overbought/Oversold Oscillator and note that the Oscillator (blue) made a higher low vs. late January but the S&P (brown) made a lower low. This too is a positive divergence, because it actually means there was less momentum on this down move than in January.

The higher low is even clearer on the Nasdaq Oscillator. But also notice that the Oscillator is still far below the zero-line. It is my belief that before we move back to a short-term overbought condition this is going to move back over the zero-line, the same way it did so in early February. I suspect it does so in the early part of next week.

Now take a look at the 30-day moving average of the advance/decline line, which is a more intermediate-term Oscillator. It made a lower low, so there was no positive divergence on an intermediate-term basis. However, this indicator is still quite oversold and I expect over the next week or so we will see it move up, perhaps not back over the zero-line (it failed to get over the zero-line in early February) but likely to it, since time is on its side.

In terms of breadth, the McClellan Summation Index has stopped going down. I can't say with confidence it has turned up, though. It would need a net differential of net negative 600 issues that's advancers minus decliners on the NYSE, to turn it right back down. Thus, the cushion is thin.

Then there is sentiment. Anecdotally, it seems to me the bulls are still hiding under their desks and cautious. I don't think the bearishness is as thick as it was a week ago, but I'm not seeing much embracing of the rally.

I did see the International Securities and Exchange Equity Call/Put Ratio at just over 2.0, which would mean my assessment of the anecdotal sentiment is wrong, since it is the highest reading and first one over 2.0 since Dec. 29. But such a high reading has caused the 10-day moving average to finally turn up.

The CBOE's put/call ratio was a still relatively high reading at .94. But it is the same situation as the ISE noted above: It has forced the ten day moving average to move; in this case it is now rolling over. 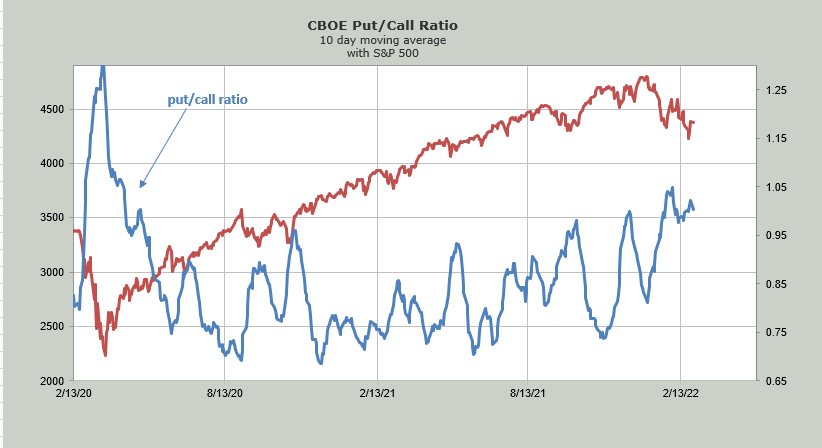 In sum, I don't have a strong view on the day to day market, but I don't think the oversold rally is done yet. I also expect we'll see sentiment shift away from all the bearishness before the rally is over.