It's been no secret. I have long been a fan of Microsoft (MSFT) . I have long been a fan of Microsoft CEO Satya Nadella. The name is and has been a staple of my most highly managed portfolio for quite some time. The shares have come back from the depths of the March 23rd low just as strong as everything else involved in the worlds of providing software services, and access to the cloud for both businesses and individuals forced to work at home for over two months. That said, these shares peaked more than three weeks ago, and have underperformed our broad equity market indices ever since. What now? Let's take a look.

Why am I even in Microsoft to begin with? Even before working remotely became such a priority for so many. Before there was a pandemic to deal with, and now a social crisis that will keep many downtowns shuttered for longer than they should have been, Microsoft was effectively growing the business through the firm's mutli-cloud environments for business. Azure (+59%) has been aggressively gaining market share on industry leader Amazon (AMZN) AWS. Azure uses the same "stack" that is used in the public cloud. This creates for businesses adapting to a cloud based model for their data centers, a hybrid environment that allows them to keep important data on premises, but leave in place the flexibility of the cloud.

For many of the firm's other business lines, the story is one of moving from a licence purchasing model toward one that provides recurring revenue through automatic renewal. This would pertain to the gaming (XBox) business, LinkedIn, and Office365. Then there is Microsoft Teams, which is a communication and collaboration platform that provides for video meetings, perpetual chat, and file storage. In other words, Teams is something of a competitor to both Slack (WORK) , and Zoom Video (ZM) . Zoom will report that firm's Q1 earnings tonight (Tuesday), which should at least be of some interest to Microsoft shareholders as well.

Shares of Microsoft got a pre-opening boost on Tuesday that has mostly abated as has the broader market once the opening bell had rung it's last. Philip Winslow of Wells Fargo, who is not just a highly rated analyst, but an extremely highly rated analyst... maintained his "buy" rating on this name, while increasing his target price to $250. Winslow sees the Intelligent Cloud leading the firm in general to revenue growth in the low to mid-teens in percentage terms. He also sees continued growth in earnings and cash flow.

The firm does not report it's fiscal fourth quarter until late July, so there is plenty of time. Some of you may recall that back in late April, allowing for some uncertainty in the reliability of the firm's supply chains related to Covid-19, that the firm widened fourth quarter guidance. The firm offered a revenue range spanning $35.85 billion to $36.8 billion, versus industry consensus of $36.5 billion. Wall Street is generally looking for EPS of roughly $1.39, which would be understandably pedestrian growth in this environment. The obvious threat to performance will come from the ability of the firm's clientele in these times, and the ability of that group to operate effectively while paying their bills. 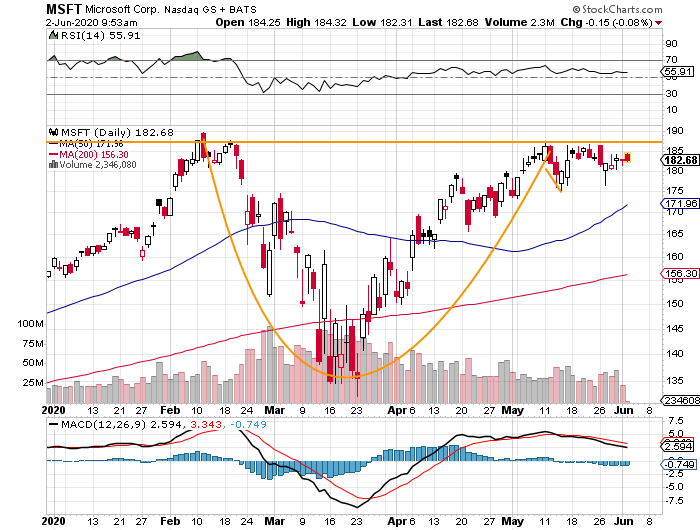 Year to date, it's not very difficult to identify the cup with handle pattern that I see. The anomaly would be the "double handle." Not sure what to do with that. Repetitive resistance at $187, and support that has been tested twice at $176 have created a tight range that could present to a Microsoft bull as a bit of base building.

Taking a much longer view, we really see a two and a half year Pitchfork that shows a trend that not only is very much still intact, but appears to be trying to break out of the model which it was doing prior the the Covid-19 related economic meltdown.

I have not adjusted my position size for a very long time. Why would I? It was doing it's job for my book until lately. Do I need to adjust now? We've had quite a run, and I hate to violate net basis, which is a long, long way off. I do think I will, however, chance an add should the shares approach a third test of the $176 level.

In the meantime, we have a pivot of $187, my still unmet target price remains $215. That target was created by an older pivot that worked. I see no reason to adjust this goal until I know that $187 is taken and held. Then, we are probably talking something in the $225 to $230 range. Just my opinion. Panic sell at $162 just in case that was your next question (central trend line of the Pitchfork).

(Microsoft and Amazon are holdings in Jim Cramer's Action Alerts PLUS member club. Want to be alerted before Jim Cramer buys or sells these stocks? Learn more now.)

Get an email alert each time I write an article for Real Money. Click the "+Follow" next to my byline to this article.
TAGS: Earnings | Investing | Options | Stocks | Technical Analysis | Trading | Software & Services

The FATMAAN names are still bouncing but the sustainability of the rotations that have been taking place recently are in question.

This Was the No. 1 Question in My Inbox About the Market

Did we see short covering or real buying? Here's my answer, and my take on how bad the indicators came in.

If you have been riding the momentum in some good stocks, it's difficult to suddenly switch horses, but on days like Tuesday you might have to.

With the indicators the way they are, here's the stand I would take for now.