The line at triage is growing long. Chinese growth is slowing. That nation put a disappointing October Retail Sales number to the tape overnight. Other Chinese macro-economic data-points remained close to alarmingly poor levels. UK Prime Minister May will try to sell a newly hammered out draft of a Brexit deal to Parliament on Wednesday morning. What could go wrong? The Italian government has refused to play ball with the EU on budgetary politics. I get that Italy is part of an economic union, and has benefited from the actions taken by that union's central bank, and I am at heart a fiscal conservative. That said, I still can't for the life of me, understand why any nation would ever tolerate the subordination of their own status as sovereign. Try subordinating my flag. That, my friends will be a no-go.

Now, add Germany to the list of casualties coming in from the field. Destatis put Germany's third quarter GDP to the tape this morning. Lousy was what had been expected. It came in worse than that. The Germans economy printed in contraction. The number that hit the tape was -0.2% q/q, or -0.8% y/y. Oh there is plenty of blame to go around. The new emissions testing protocol slowed automobile production, the trade environment, and a seemingly semi-permanent low tide at the Rhine are all mentioned as forces that slowed commerce. By the way, as the auto makers get their collective act together, Q4 data should improve, at least q/q. That said, this Q3 data is the worst seen for the EU's "economic engine" in five years. Think the ECB actually gets where they think they are going? Me neither.

Twelve Monkeys? Twelve Days of Christmas? Try twelve consecutive days of declining market prices for oil futures. Unprecedented. Do we go for a baker's dozen? This time, it was a direct shot from OPEC that caused the carnage, and carnage it was. The cartel lowered demand forecasts for both this years and next. Why? Slowing global demand. Oh. That's not good. No, it wasn't, but it's not like we have not seen this situation unfolding before our own eyes.

Brigadier General Gouverneur K. Warren peered through his binoculars. Immediately, Warren saw the danger of a left flank undefended. The glint of enemy bayonets reflected off of the sun. It was a hot, humid July day. Warren sent for help as the extreme right of Longstreet's Corps moved in. Enter regiments from Michigan, New York, Pennsylvania, and in particular, the 386 officers and men of the 20th Maine. It was they, who were destined to preserve a union. It is they, who would once out of ammunition and water, not retreat, but charge instead. When you wake up in one United States every single day of your life, you owe that to a handful of dirty, sweaty infantry types who poured into the unguarded left flank of the Army of the Potomac on 2 July 1863. All because of one situationally aware leader with courage.

We do not have a General Warren. Domestic economic growth will slow without further stimulus, of that I have no doubt. The need to borrow at the federal level also needs to grow alongside. Without further tax cuts the only hope for stimulus going forward will be in the hope of a bi-partisan infrastructure package. That would prolong this era of robust economic expansion, but at the expense of exacerbating the fiscal picture.

Am I pessimistic? No. I am a cockroach. Do what you want to me. I will adapt. I will overcome, and if you stand in my way... I will defeat you. This, I promise. Think it's dangerous now? It is. I do think that we get positive headlines that allow us to trade profitably short to medium-term. Long-term, better to "waste" time preparing for something that never happens than to reach a point where as an individual running a family you regret being unprepared. Buy some physical gold.

What Will Cause a Prolonged Bear Market

1) Obscenely High Valuations... Not a problem.

4) Problematic Inflation ... Not a problem.

Note: Ultra-Loose Fiscal Policy can not produce a bear market, in fact it's stimulative. What it does though is produce after a time.. all of the above.

As We Walk Through The Valley of Death

1) Understand... All conditions are temporary.

3) Adapt... In all ways necessary, and to all environmental obstacles. Whatever it takes.

Scanning over ten year's time, I glance at late year performance for the SPDR S&P Retail ETF (XRT) . It appears that there is a fairly regular positive late year impact on the group, even in tough times. For much of the past ten years the average U.S. consumer has struggled mightily just to put food on the table, and shelter their families. Call it a reaction to Q3 earnings, Black Friday sales, Cyber Monday sales... call it what you want, but in eight of the past ten Novembers, the XRT ETF has rallied into the end of the month, and in eight of the ten Decembers that followed the XRT either rallied further or at least held most of November's gains.

Well, this year, national consumer optimism surveys are screaming along at their highest levels since your best pal was still trading on pen and pad, and could still halt trading in almost any particular stock by merely looking the crowd in their eyes. Those days are gone, but the consumer may be back, if only for a season. Can you smell the money? So, can I. We are not like salaried people. If we don't kill, we don't eat. That said, let us hunt together and seek victory as one.

Last year was the strongest holiday shopping season since 2010 at 5.3% growth from the year prior. Can this year top last year? Most experts do not expect that, as last year was the first holiday season after the long economic winter that most of the nation had struggled through. Would you take 4% growth this year. You bet your tail that I would. You can also bet that e-commerce continues to blossom as America's preferred method of getting it done.

I think the season bodes well for all of my longs, Amazon (AMZN) , and Walmart (WMT) . The one, Amazon has blessed us with tremendous volatility in recent weeks. Oh, what a gift, just as P/L ratios for those running net-long portfolios had started to crumble. That however, is something that traders must take when they can get it. Like goal-line fumbles, that kind of game can not be counted on. Still, my core AMZN long remains untouchable, and this is the only FANG name that I trust like that. Not that there is no value among the other FANGs, there is, but when you turn your back on the Pentagon, you turn your back on me. When you turn your back on me, you no longer exist.

Now, Walmart is going to be the hero in our story. The behemoth that turned underdog has now turned survivor.

Walmart goes to the tape on Thursday morning. I was going to look at Nvidia (NVDA) , but Huang goes to the tape Thursday afternoon, and I know that my loyal readers need a look at both, so here goes. The industry is expecting WMT EPS of $1.01 on revenue of $125.5 billion. Whispers are running slightly to the upside for EPS with a small miss possible for revenue. Know what I think? I think that if these numbers print in ballpark proximity, they might not matter that much. What will matter for the quarter reported will be same store sales growth, hopefully around 3%, and growth of the e-commerce segment. That growth printed at an unsustainable 40% for the second quarter. Walmart does not have to beat it's own performance there. They just have to beat Target's (TGT) , while showing traction versus Amazon. That's what is baked into the last sale.

Guidance will matter more than performance in determining market reaction as well. The fourth quarter is typically Walmart's most important for obvious reasons. The firm is currently guiding Wall Street toward revenue of $140 billion, or 2.7% growth. My gut says that this might be increased, but I know that I need to protect gains already made. We also need to hear something on what the firm expects from the Flipkart acquisition, in terms of expansion, performance, and negative impact upon margin. 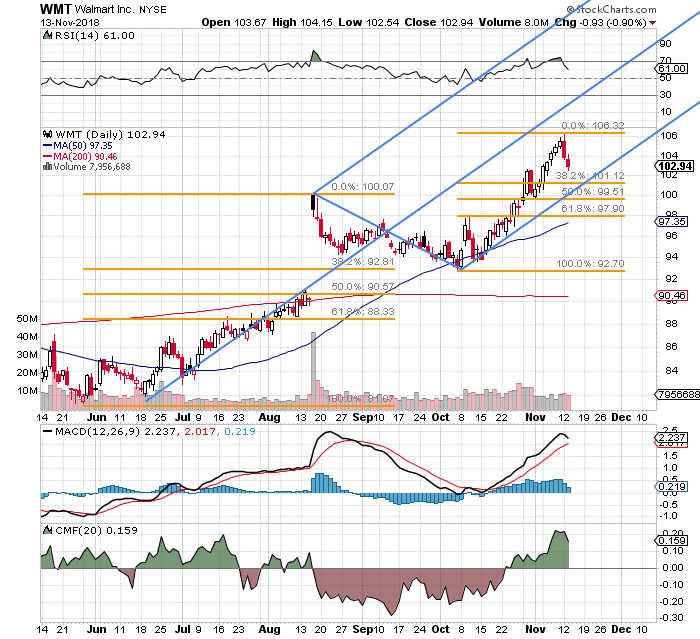 This is one of the few names left in our universe sporting a Pitchfork model that survived October. The recent pullback ahead of earnings allows I think an increased level of comfort as well. Both Relative Strength, and the daily MACD show signs of loosing some steam,. However, there is no such signal being emitted by Chaikin's Money Flow indicator at this time.

How to Protect WMT Longs Through Earnings and the Holidays. (minimal lots, adjust for size)

-Assuming the need to protect gains on a long position of 100 shares.

Note: The sale of the call, subsidizes the bear put spread, providing a net credit of 15 cents. What this setup also does is maximize profit at target price on an upward move, and allow for capital extraction of $7.50 on a negative move before plowing back in.

(Amazon and Cisco are holdings in Jim Cramer's Action Alerts PLUS member club. Want to be alerted before Jim Cramer buys or sells AMZN or CSCO? Learn more now

New Providence Acquisition's chart looks poor right now, but this name is on my radar, and I'm starting to build a position.