When momentum breaks, sometimes there is no way to fix it but to wait it out. That's what we're seeing in the electric vehicle space. I think it's fair to argue Nikola (NKLA) both started and ended that momentum even if Tesla (TSLA) received most of the headlines. If you're a player in the EV space, it's probably time to start paying more attention to Nikola. We may need for that stock to find a bottom before the other players can turn this momentum around. I would anticipate Nikola bottoming a day or two before the rest of the group, but names like Tortoise Acquisition Corp.  (SHLL) and Spartan Energy Acquisition (SPAQ) will be ones to watch. SHLL is buying Hyliion and SPAQ is picking up Fisker. Of course, NIO (NIO) will be an obvious name to watch as well.

Trying to catch the bottom here will be tough. I anticipate the first day bounce will be big, but I'm not sure what level we'll see it. Nikola is showing a little selling exhaustion after the push under $30 this morning, but this has been a great example of supply and demand. When the shares ran to $90, there was very little supply with not only demand, but also forced demand in the form of a short squeeze. Now, we have a ton of supply hitting the market with insiders sitting on huge gains. Even at $30, the PIPE buyers are looking at a price three times what they paid. Warrants are trading at intrinsic value, but they are no longer a factor. And we know the biggest insiders will now be able to borrow against their stock at the beginning of December.

If you're looking for possible bottoms, we'll start with Nikola. And for one possible bottom, I give you... today. We're back to the original May push followed by the support of the June consolidation before the rocket higher. One could argue buying here with a stop around $27 and an upside target back into the upper $30, possibly even $40, and I could see that. Now, I don't love we gapped lower today, but a close above $31 wouldn't make it look as bad. The falling Stochastics isn't appealing and a close under $30 would be very bearish. 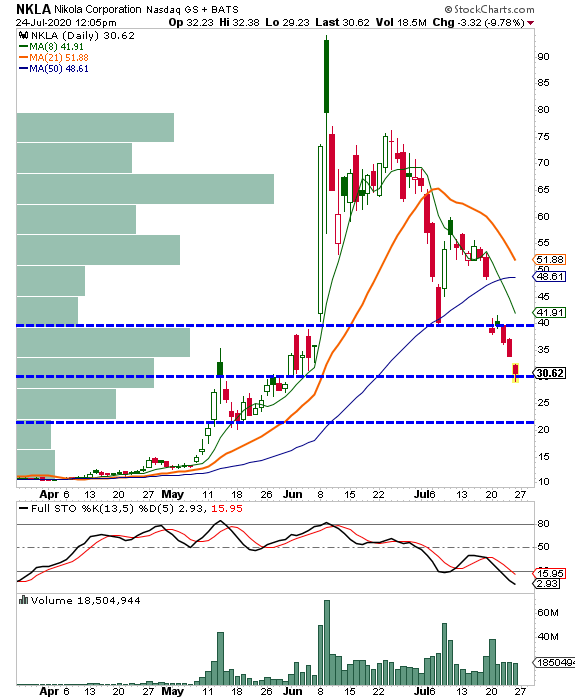 The next lowest level is $20, but I see lots of congregation and a gap fill around $25. If I had to guess, that's where I would be looking, but I'd much prefer the overshoot to the low $20s or a Full Stochastics bullish crossover with the stock around $25. I do think the bulls will fight hard to defend this $30 level, but I feel the $30 straddles pricing a move around $5 by next Friday are on the low end of the scale. I think we will see minimally $5, but something more in the range of $7 to $8.

If we look at SHLL, we find a slightly better picture. The Full Stochastics is beginning to flatline. If the stock could poke back above today's open of $19.25, I think we have a shot at a bottom to $21. That being said, there's a clear bearish channel on the stock with a path to $16. As much as I love the story and fundamental projections behind SHLL, I still wouldn't force it today. I'd be a buyer at $16 or a seller of the August 21 $15 puts around $0.50. One could sell the August 21 $17.50 puts around $1.50 as well for that $16 entry. 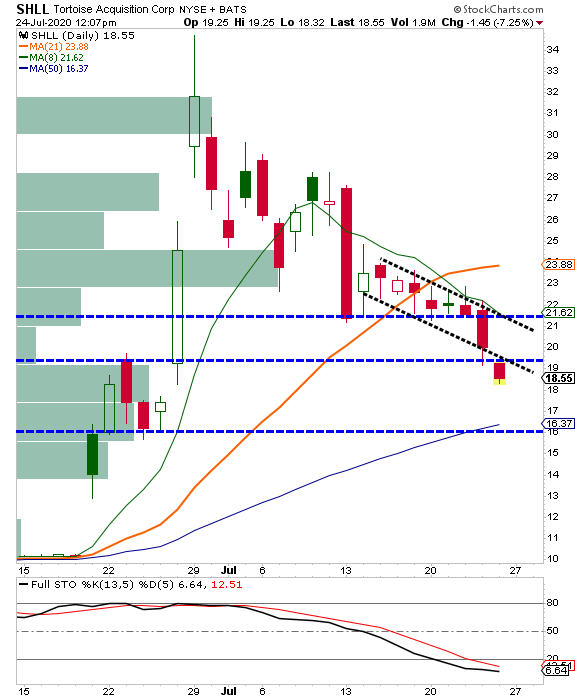 SPAQ doesn't really have enough in the way of a chart to make a call. We do note this fishhook type of drop with the initial breakout as support. This one is also handing around the 21-day simple moving average. Of the three, this one has my attention simply from the standpoint it really hasn't run too much overall and has given back virtually all of its gains. If SPAQ continues to drop, remember there is a redemption feature on these types of securities, so it does give you some pre-merger downside limits. 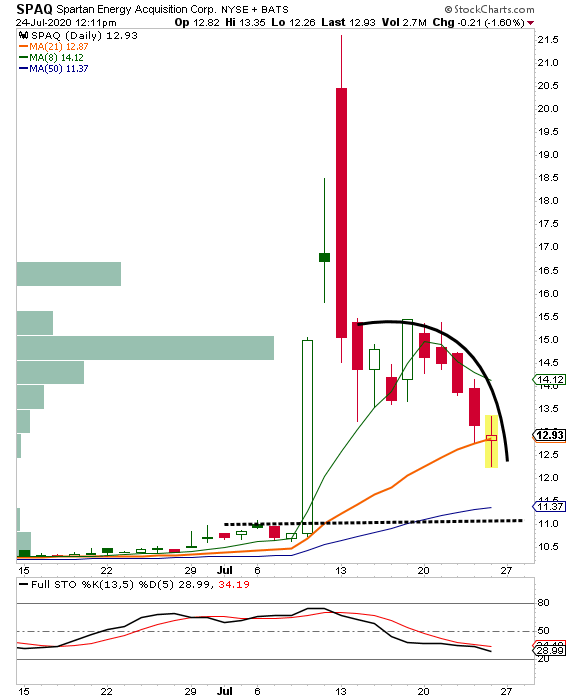 My positions in Nikola are all in-the-money currently and will cancel out after the close today barring some miracle rally above $34, and I've been stopped on SHLL for a loss, so I'm just left with a small long position in SPAQ currently.

Get an email alert each time I write an article for Real Money. Click the "+Follow" next to my byline to this article.
TAGS: Investing | Options | Stocks | Technical Analysis | Trading | Electric Vehicles