Tonight's the Night...Gonna be alright? I don't know. I have no idea if Rod Stewart knows. What I do know is that Adobe (ADBE) will go to the tape with the firm's fiscal second quarter financial results after this (Thursday) afternoon's closing bell. There are 23 analysts that I can find following this stock. The consensus view among them seems to be for EPS of $2.33 on revenue of roughly $3.16 billion. Unlike what we sometimes see with many stocks, there is not a lot of variance in expectations from the most bullish down to the most bearish. Everyone seems to be between $2 and $2.43 on earnings. Everyone seems to be between $2.97 billion and $3.21 billion on sales.

As for track record, it's been a long time since I have rock and rolled. It has also been a long time since Adobe missed the numbers. The firm has not missed consensus earnings expectations since Q4 2018, and has not missed on revenues since Q2 2016. Readers will recall that when Adobe last reported, on March 12th, the firm did guide revenue expectations for the quarter to be reported this evening below what was consensus at the time. The impact of Covid-19 on these numbers? While one might expect a cloud software king such as Adobe to do well in this environment, one also has to wonder about not only the ability of the firm's clients to move forward with Digital Media, Digital Experience or cloud based projects, but one has to wonder about the health of the clients themselves as well as their ability to pay their bills.

Just this morning, ahead of these numbers, the very highly rated Brian Schwartz of Oppenheimer reiterated his 'Buy" rating on shares of ADBE, while increasing his price target from $410 to $430. Over the past week, two other closely followed analysts... Brent Thill of Jefferies and Saket Kalia at Barclay's, both placed a street-high price target of $450 on the shares. Because I know you were going to ask, my price target has been $420 for ADBE since the breakout for this name became undeniable in late April.

So, tonight, we'll watch the segment specific performance for Digital Media, where both the lion's share of the sales as well as the lion's share of the growth has been. The key product here in this segment is the Creative Cloud. This means recurring revenue driven by content providers. The Digital Experience will also be watched for growth. This segment is driven by marketing, targeting, and digital advertising. This is where I think corporate budgets that are obviously depressed could hurt Adobe in the present. That said, I also expect to see increased forward looking demand for what Adobe does. This could be one of those quarters where words matter more than numbers. I hate those, but these are the times. 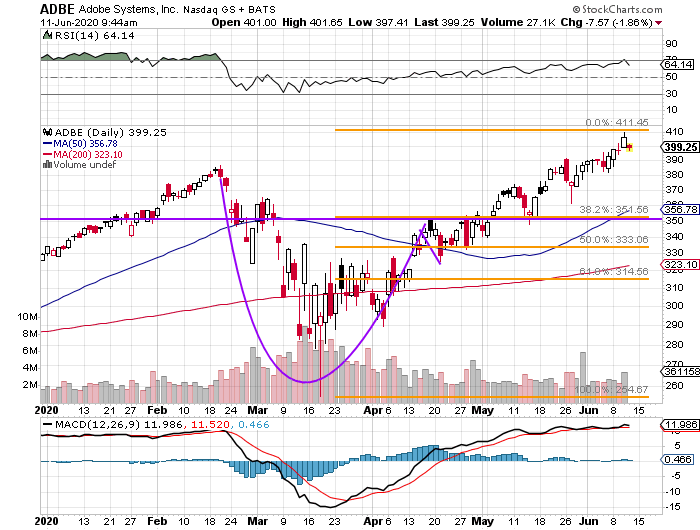 The shares have remained close to technically overbought form most of the past six weeks. The daily MACD presents as potentially dangerous with both the 12 day and 26 day EMAs more than just a bit elevated.

Are the shares extended? Where's the traffic? The pivot was clear at the $350 level. The 50 day SMA? $357. A 38.2% retracement should Wednesday's high be "the high"? $354. That's a lot of traffic in a small area. I have already told you that I took off some equity risk. What an investor could do, is this. A trader who has already extracted capital through an equity sale, could expose him or herself to having the potential of having to replace that equity at a discount while getting paid to do that. Let's say a retail trader had sold 100 shares at $400. That trader could then sell (write) one ADBE $380 put expiring tomorrow for about $2.10.

Get an email alert each time I write an article for Real Money. Click the "+Follow" next to my byline to this article.
TAGS: Earnings | Economy | Investing | Options | Stocks | Technical Analysis | Trading | Software & Services | Technology | Coronavirus