Get 'em while they're hot? Maybe. Maybe not. Stitch Fix (SFIX) reported surprise beats for the firm's fiscal first quarter in terms of earnings and revenue. Should the shares be acting as well as they are this morning? I'm not so sure. Let's dig in. For the quarter reported, Stitch Fix posted net income of -$178K, or EPS of $0.00 once rounded. The firm put revenue of $44.82 million to the tape, good enough to beat consensus, and good enough for annual growth of 21.5%. Bear in mind though that this sales growth of 21.5% was indeed the slowest growth this firm has experienced since going public in late 2017.

Of all of the numbers that reside beneath the headline data, it was Adjusted EBITDA that perhaps surprised the most. Spelled out, adjusted earnings before interest, depreciation, and amortization landed at $5.1 million versus expectations of -$5.5 million. Active clients also grew 16.6% to more than 3.4 million. Net revenue per client increased by 9.5%.

Moving toward the firm's fiscal second quarter, Stitch Fix projects sales of $447 million to $456 million. The consensus of 13 Wall Street analysts for that quarter is $456.5 million, so that's a little sobering. The firm now guides adjusted EBITDA for Q2 to a range of $10 million to $15 million. Then again, the firm initially had led investors toward the Q1 expectation for adjusted EBITDA that they crushed.

For the full year, the firm now expects revenue to land at $1.9 billion to $1.93 billion. Wall Street is already at $1.92 billion for this number. The firm also guides higher and narrows full year adjusted EBITDA to $18 million-$32 million from $10 million-$30 million.

This is a good quarter. I am not trying to insinuate that it was not. That said, sales growth is slowing despite the firm's entry into the British market last spring. Amazon (AMZN) remains a threat competing in the digital shopper business of Prime Members through their own appropriately named Personal Shopper service. I do understand the need to attract and retain talent. It should be noted, however, that stock based compensation expense exploded from $6.6 million for the comparable quarter one year ago to $12.1 million for the quarter reported this morning. Just saying that 2.7% of all sales might be a bit much for a firm posting a net loss on the bottom line. Just a thought. 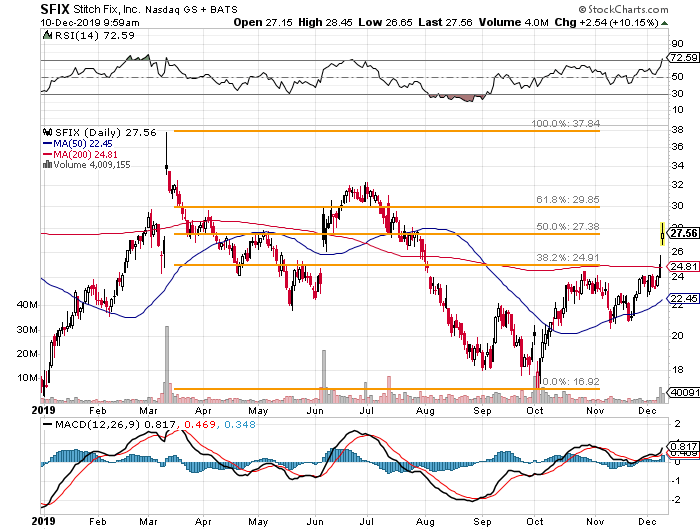 My expectation is that once the short cover burns out, these shares will have trouble holding the 50% Fibonacci retracement level at $27.40. Could I be wrong? Sure. Do these shares return to the 200 day SMA at $24.91? I think so. Is this name worthy of risk? My opinion is no, it is not.

I prefer not to actually short the equity of stocks that muddle along with sizable short interests as there are just too many accounts out there obligated to buy these shares somewhere. For those that can not be persuaded otherwise, one can probably still put on a March 20th $27/$24 bear out spread for a net debit of $1.45 if that seems worth it.

Get an email alert each time I write an article for Real Money. Click the "+Follow" next to my byline to this article.
TAGS: Earnings | Investing | Options | Stocks | Technical Analysis | Trading | Apparel | Stock of the Day