Some day soon? In an EBITDA sort of way? That's what we're hearing. That's why investors have been paying up for shares of UBER Technologies (UBER) overnight and into morning. The bare truth is that the fundamental backdrop for this still money-losing corporation is improving, significantly. Before we get to dollars and cents, let's talks about percentages. Certain percentages. More folks are using the service. 22% growth in Monthly Active Platform Consumers, and these users are becoming more frequent. 28% growth in "trips" and 28% growth in Gross Bookings. On that note, I am an older man. My children are in their twenties. If I need a ride, I go out to a busy street and stick my hand in the air. That doesn't even cross their mind. They get on their mobile device and get up from wherever they are when they know that their ride is out front. Times change. Cultural habits evolve, even if people don't always.

For the firm's fourth quarter, UBER Technologies reported EPS of -$0.64, a beat of consensus, on revenue of $4.07 billion. The sales number also beat consensus and was good for year over year growth of 37%.

Now, we already know about the growth in Gross Bookings, but when breaking those bookings down by segment, the results are stunning. For all of the talk about getting out of the struggling UBER Eats business, the firm has clung to the business as a vehicle for growth, and instead had chosen to vacate markets where maybe there was less opportunity to eventually become profitable, such as India or South Korea.

For Rides, Gross Bookings grew 18%, but produced GAAP revenue of $3.056 billion for growth of 27%. Rides still "drive" 75% of revenue. However, the quarter shows a 71% increase for the Eats segment, producing $734 million in GAAP revenue, which is growth of 68%. Freight is by far the smallest of UBER's business segments, barely worth a mention, but that said, the unit posted GAAP revenue growth of 75%, so this is a line to keep one eye on going forward, especially as shipping costs have become a growing issue for many retailers. As a potential investor, who is really quite neutral on this name, my thought is that outsourced non-food delivery could become very interesting.

Globally speaking, the firm operates in what it divides into four regions, 1) the U.S. & Canada, 2) Latin America, 3) Europe, Middle East & Africa, and 4) Asia Pacific. Revenue growth is still led by the home market of North America at 41%, but all regions are showing at least 27% growth. Globally, these amount to the 37% growth stated above.

The quarterly loss? That's what everyone wants to know. Net loss for the quarter reported amounts to $1.1 billion, which includes $243 million in stock based compensation expense. That brings us to margin, which is improving. Rides adjusted printed at 24.3% as a percentage of Rides revenue. Eats, however, ended the quarter with adjusted EBITDA of -$461 million, as the firm continues to invest in this segment's headline growth in key markets where the firm thinks it can be a dominant player. This includes promoting the business through incentives and referrals for drivers.

The firm guides FY 2020 booking toward growth of 15% to 23%, and adjusted net revenue toward growth of 24% to 32%. UBER now expects Q4 2020 to be the first positive EBITDA quarter in the firm's short public history. That quarter, for those keeping score, is ahead of previous guidance that had placed this event in FY 2021. In an interview at CNBC, CEO Dara Khosrowshahi said, "For every dollar of revenue growth, especially from Q4 to Q4, we expect to drop $0.50 to $0.55 to the bottom line." Khosrowshahi added, "We think that's absolutely doable to get to profitability by Q4."

Know what? Khosrowshahi does sound confident. I have doubted him in the past. Do I now doubt my previous doubts? A bit, to be honest. Enough to buy some shares? Not yet. Enough to get involved in any way? That's a horse of a different color. Let's explore. 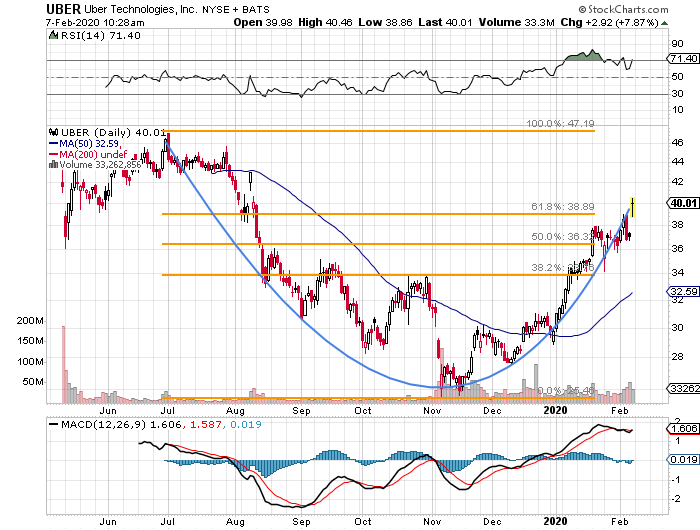 I see two forces at work here. For one, the shares after only recently meeting some resistance at a 61.8% retracement of the July through November selloff, are fighting to stay above that spot ($38.89) and have found support there once already this morning.

Holding that support would be key to whether the chart goes on to further complete what looks to be a "cup" pattern in progress, or if the share fail here, the cup has fully formed, allowing for a "handle" to develop. I would see both as rather positive... the difference being that adding a handle might give the investor a more advantageous point of entry.

Get an email alert each time I write an article for Real Money. Click the "+Follow" next to my byline to this article.
TAGS: Earnings | Investing | Stocks | Technical Analysis | Trading | Food & Drink | Transportation | Stock of the Day