Crypto is making its way more and more over into stock land. Facebook (FB) is now Meta. Coinbase (COIN) is expanding into more coins and NFTs. Bitcoin now lives in ETFs. Roblox (RBLX) continues to show us the gaming space with an idea of ownership within games has merits. Disney (DIS) , McDonald's (MCD) , and other blue chips have thrown their hat in the ring. Headlines about the three or four metaverse or NFT stocks to own are becoming common place. At some point, even traditionalists will have to ease off the "Beanie Babies" argument.

I've seen and heard folks talk about Ethereum flipping Bitcoin. That would mean the price of Ethereum rising above Bitcoin's. Impossible? No, but a tall task none-the-less. That being said, Ethereum is one of the places I see the most action. Bitcoin really doesn't have a role in NFT creation or trading. It doesn't have much, if any, role in NFT gaming. It doesn't touch much in the alt coin space. Ethereum is used in all of these areas.

The demand for Ethereum is currently widespread. Ironically, that demand is somewhat killing the NFT market, at least those projects that transact via Ethereum. Low priced NFT projects are a ghost town as the cost (gas) to buy significantly exceeds the cost of many NFTs themselves. That's not a recipe for demand. Still, the demand for Ethereum is there, and based on the current technical setup, it looks like Ethereum may be looking to close the gap of price differential with Bitcoin a bit more.

I'm using the Grayscale Ethereum Trust (ETHE) and Grayscale Bitcoin Trust (GBTC) on this chart. I do realize these can trade at a premium or discount to the underlying coin, but they give us a pretty good relationship view. 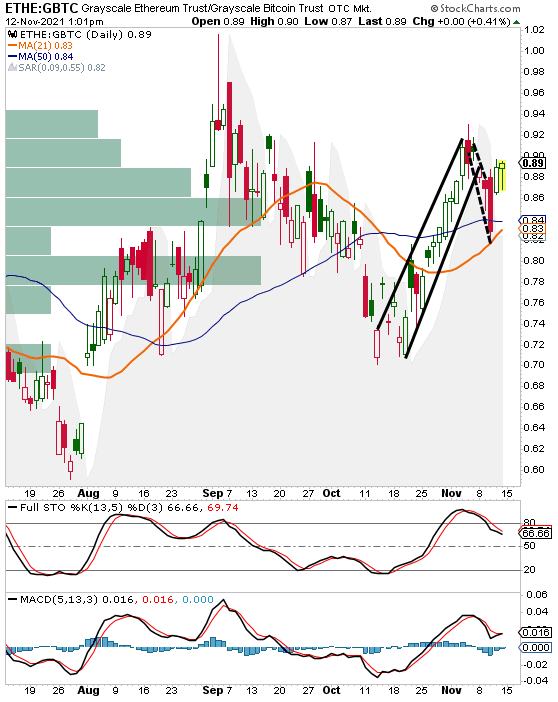 ETHE enjoyed a pretty good run during the second half of October after underperforming the prior six weeks. The recent consolidation bounced right off the 21-day simple moving average (SMA). Both that and the 50-day SMA appear worth watching as they've been influential in price action. I'm focused on the .92 level. Above that and I'm looking for a run back to 1. The MACD indicator is set up to crossover bullish here in front of the price breakout. The Parabolic Stop-and-Reverse (PSAR) already has done so.

Although the Full Stochastics indicator is still in consolidation mode, there's enough here that Ethereum and Bitcoin traders should watch here. A long Ethereum, short Bitcoin setup looks as though it is on the table. I weigh the risk at 6% and reward around 11%, so almost two to one and worth consideration if you are comfortable playing in this space.

Get an email alert each time I write an article for Real Money. Click the "+Follow" next to my byline to this article.
TAGS: Bitcoin | Investing | Stocks | Technical Analysis | Trading | Cryptocurrency