Now for the fun part. Just check out the gains made for some of these metrics. Gross margin improved from 44% a year ago to 48%, producing gross profit that grew 116% to $1.83 billion. The margin expansion was driven by a richer mix of sales, including high-end Ryzen, Radeon, and EPYC processors. Operating income popped 380% to $831 million on an operating margin that increased from 9% to 22%. Now, net income... that number came to $710 million, up a cool 352%. GAAP adjusted, the number amounted to $778 million, up a mere 260% year over year.

Computing and Graphics contributed $2.25 billion toward the $3.85 billion whole. This was up 65% annually and 7% sequentially. Estimates had been for less than $2.2 billion. Segment performance was driven by higher client and graphics processor sales. GPU ASP sales were driven by both those high-end graphics cards as well as the data center. Operating income for the segment came to $526 million, up from $200 million last year and $485 million last quarter.

Enterprise, Embedded and Semi-Custom produced sales of $1.6 billion, up 183% year over year and 19% quarter over quarter. EPYC processors were a driver here, as segment operating income landed at $398 million, up from $33 million a year ago, and $277 million last quarter.

"All Other", which for reporting purposes are all other operations that do not neatly fit into the firm's two identifiable segments, reported an operating loss of $-93 million, comparable to $-100 million last quarter and $-60 million for Q2 2020.

The firm ended the quarter with a cash balance (cash, cash equivalents, and short-term investments of $3.793 billion, incredibly up from $2.29 billion just six months ago. This alone has taken both current assets and total assets up more than $1.7 billion each over that time. Current assets absolutely dwarf current liabilities (almost 3 to 1). As for total liabilities, the entry for net long term debt is shockingly low, and in decline at that. Oh, and just a mention on the entry for goodwill, the firm barely makes use of it, and probably in my opinion would be entitled to value the brand name alone at a much higher level than they do. This is a pristine balance sheet.

Advanced Micro Devices generated $888 million in free cash flow for the quarter, up from $152 million for Q2 2020, up 6.7% from Q1 2021. The frim repurchased 3.2 million shares during the quarter reported for $256 million. This was just the start of a $4 billion repurchase authorization unveiled this past spring. On the Xilinx (XLNX) deal that I know all of you wanted to hear some progress on, there was nothing new reported.

AMD CEO Lisa Su commented... "Our business performed exceptionally well in the second quarter as revenue and operating margin doubled and profitability more than tripled year over year." Su added... "We are growing significantly faster than the market with strong demand across all of our businesses. We now expect our 2021 annual revenue to grow by approximately 60% year over year driven by strong execution and increased customer preference for our leadership products."

For the current quarter, the firm now guides revenue to a rough $4.1 billion, plus or minus $100 million, and adjusted gross margin toward 48%. For the full year, AMD now expects revenue growth of roughly 60%, up from prior guidance of 50%, driven by all business units. The firm also expects adjusted gross margin to print close to 48% up from the previous expectation of 47%. 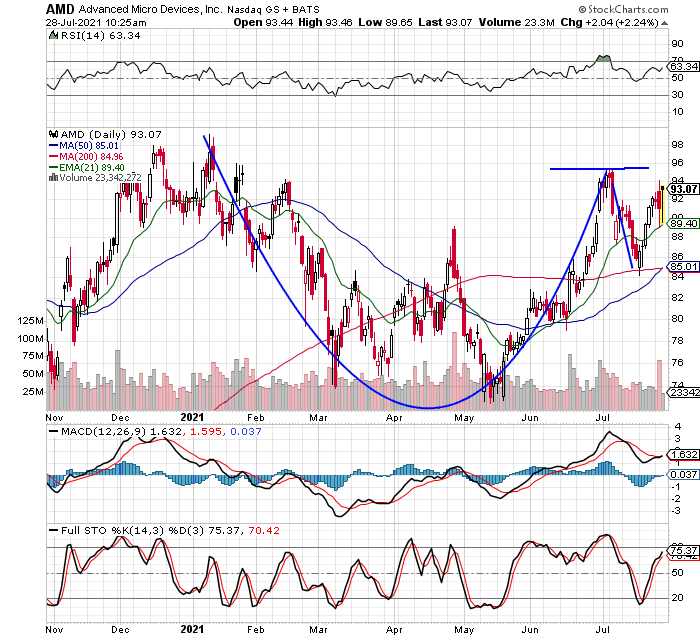 We have a nice looking chart here that appears set up for a potential breakout. First, we'll see that Relative Strength and the Full Stochastics Oscillator are both strong, but not technically overbought. Secondly, we see the daily MACD which is in good shape with the 12 day EMA poised for a bullish crossover of the 26 day EMA with the nine day EMA above zero.

Now, let's do pattern recognition. We had at one time started to look like a "double bottom" but that now looks like a "cup with handle." This makes our pivot $95.50, not $89.25, which places the rally at an earlier stage of development. I also like that at the depth of the handle's development, the stock bounced off of the 200 day SMA. Oh, on that note, we also have a 50 day SMA that has just crossed over the 200 day SMA. That's a "golden cross" for the new kids.

Panic: $83 (breakage of all support lines)

Get an email alert each time I write an article for Real Money. Click the "+Follow" next to my byline to this article.
TAGS: Earnings | Investing | Markets | Stocks | Technical Analysis | Trading | Semiconductors & Semiconductor Equipment | Technology | Technology Hardware & Equipment