Netflix (NFLX) reports the firm's third quarter financial performance after the close of business tomorrow (Tuesday) afternoon. The consensus of a whopping 34 sell-side analysts that cover this name is for EPS of $2.56, with the range of expectations spanning from $2.51 to $2.64. A consensus result would be good enough for year over year growth of about 47%. Revenue generation for the quarter is expected to land close to $7.48 billion. The range here stretches from $7.42 billion to $7.53 billion. Projected performance would add up to year over year growth of 16.1%.

The company itself guided to EPS of $2.55 on revenue of $7.48 billion back in July. The company also guided conservatively on global streaming paid memberships ($212.68 million) and global paid net net additions ($3.5 million) for the third quarter, both numbers were below consensus at the time.

Of course the comp here is Q3 2020, which is the quarter where Netflix finally started acting quite normal. The surge into streaming that had benefited the company during the early days of the pandemic had started to abate, just as the competition had started to heat up. Not that Netflix was losing a ton of customers, but growth had started to stall and viewing hours had started to splinter as The Walt Disney Company (DIS) experienced tremendous early success with the launch of Disney Plus and the Disney Streaming Bundle that includes both Hulu and ESPN Plus.

Along the way, Apple TV (AAPL) Plus, ViacomCBS' (VIAC) Paramount Plus, Comcast's (CMCSA) Peacock and Amazon (AMZN) Prime Video all cut into Netflix's share of viewership. While it probably helps with some viewers that Netflix does not run commercials, the other side of that coin with some other viewers might be that Netflix is the most expensive streaming service. Netflix did not put their hands up and surrender. Twitter followers will note that I did produce some nice cash last week on a short-term Netflix trade from the short side. That was based on intraday technicals. This piece has nothing to do with that, this is about the investment picture.

The Here and Now

The stock sold off in mid-2020, hitting a low of roughly $478 in May. Even as competition in the space intensified, for the most part the community of analysts stuck by Netflix. Netflix would go on to explore entry into the streaming video game space, and focus on providing high quality or at least consumer driving content. The big hit right now, anywhere in streaming is the South Korean series "Squid Game", which through the firm's internal metrics for quantifying a show's financial impact has placed the number for this show at $891 million so far. Approximately 132 million individuals have watched at least two minutes of Squid Game. The series only cost Netflix about $2.4 million per episode, or $21.4 million for the whole season. That's some profit. I am not a Netflix devotee, but my wife is, so I am not allowed to cancel my subscription until she cancels me. The prior Netflix champion for those who care, was Bridgerton.

As of the end of June, Netflix had $7.78 billion in cash and equivalents on the books, down small from six month earlier. Current assets are larger than current liabilities. Short-term debt has increased over the preceding six months, but the already large entrée for long-term debt did decrease by almost $1 billion. In all, total assets had increased for H1 2021, while total liabilities (ex-equity) had decreased. The current ratio is okay. You want to know what the firm's tangible book value was per share on June 30th? You're going to smile. $1.70. Tiny? At the end of 2020, the firm's tangible book value was a loss of $6.06, so they're on a roll. Free cash flow per share turned positive for NFLX in 2020, and has so far stayed in positive territory in 2021. The stock currently trades at 489 times forward looking earnings.

From last Monday through this Monday (today), I counted 15 sell-side analysts that posed some kind of opinion ahead of earnings. We have 13 that stuck with "buy" ratings or their firm's equivalent. A number of them raised target prices. There is one "hold" rating with a target price of $450. That's Mark Zgutowicz of Rosenblatt Securities. There is also one "sell" rating with a $342 target. That's Michael Pachter of Wedbush. 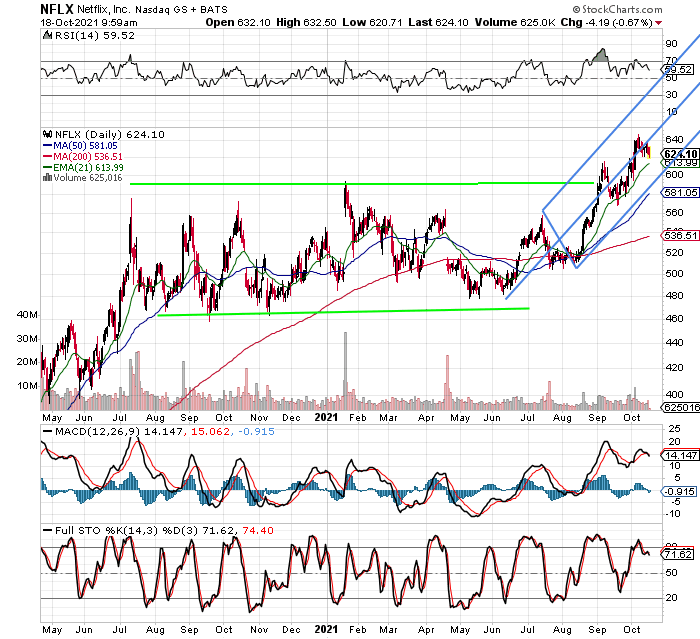 What readers see here is a long flat basing period of consolidation that produced a breakout past a $593 pivot last month. Support for the move actually forms a Pitchfork that dates back to June. The stock is not technically overbought though it is close to it, by either of my preferred metrics... the Relative Strength Index and the Full Stochastics Oscillator. That said, the daily MACD looks like it's ready to take a break. The options market is pricing in a roughly $19 move on the numbers, or 3%.

I would not be surprised to see some profit taking ahead of Tuesday afternoon's release. I will probably play this name from the short-side today, and if I make my money today, I will get flat early. Understand that I usually play NFLX from the short side, so there is a bias in my short-term analysis. It works for me. It will only work for you if this is what you do for a living. If you have to spend your productive hours doing something else, then this just ain't' your game.

If I wanted to get long this name, I would probably try to get the shares at a discount. Paying the last sale ($624) for 100 shares in my opinion requires the investor to write something, perhaps a $635 call expiring this Friday (for about $15) against the position. This knocks the trade's net basis down to $609, and covers the majority of the implied volatility should the shares get hit upon the report. Of course profit is capped at a net $26 (4.3%) through expiration. That's the safest way I know to get long some shares at this point in the game.

The trader could knock another $3 off of net basis through the sale of a $580 put also expiring this Friday, but that does open the trader up to increased equity risk in case of disaster.

Get an email alert each time I write an article for Real Money. Click the "+Follow" next to my byline to this article.
TAGS: Investing | Stocks | Technical Analysis | Trading | Movie Production | Movies | Earnings Preview