Ma Bell. "The Telephone Company" on the streets. Just plain "Telephone" on the just reopened trading floor of the New York Stock Exchange. Oh, this is still a telecom, and still part of my overall exposure to the coming world of 5G technology, but that's not the headline story at AT&T (T) these days. Those might be good reasons to either invest, or not invest in this name, but that's just not today's roast beef. For today, for investors, this is the story of HBO Max, the story of what to do with DirecTV, and as always the story of sustainable dividend yield.

Warner Media, which is part of the AT&T empire launches it's premium streaming service HBO Max on Wednesday (today). The firm has built HBO Max around it's successful HBO product. The competition is stiff as the price per month is on the high side at $15, as opposed to what industry leader Netflix (NFLX) , rising star Disney (DIS) Plus, and Hulu (also controlled by Disney) charge consumers. Not to mention the competition from the rest of a field that includes among others, Amazon (AMZN) Prime, Apple (AAPL) TV Plus, and Peacock (Comcast: (CMCSA) ).

The goal is to get HBO Max to 50 million subscribers and $5 billion in annual revenue within five years. Can it be done? Existing HBO customers number 34 million. That group will be converted. The parent firm can help get the number to the 50 million subscriber threshold, a number that Disney Plus has already reached in little more than half of one year, albeit aided by an economic shutdown that HBO Max will in some way miss. The parent firm, AT&T will likely bundle products such as telecom services, internet services, and the struggling DirecTV satellite televisions service together with HBO Max in some sort of discounted pricing scheme that could bolster the streaming service while preserving those businesses in decline.

Keep in mind that AT&T can do this in house, where as key competitor Verizon (VZ) had to cut a deal with Disney, and T-Mobile (TMUS) did something similar with Netflix. Just for an idea of what's inside the service, HBO Max will run with content provided by Warner Brothers, DC Entertainment, the Cartoon Network, CNN, and TNT. The service will also have streaming rights to such hit shows as Friends, Doctor Who, and the Big Bang Theory.

What AT&T has to do is either find a buyer, or something better to do with DirectTV, a $49 billion purchase made in 2015 at this point  which would have to be considered something of a mistake. AT&T lost nearly 900K premium video subscribers in Q1. The firm has gone through something of a flux. Earnings and revenue disappointed for the quarter reported in late April, and guidance was pulled due to the impact of the public health crisis. The firm elevated former COO John Stankey to his new role as CEO as Randall Stephenson retired. The firm has expressed confidence in not just cash flow and paying down debt, but to maintain the annual $2.08 dividend, which at a last sale of $31.89 yields 6.75%. That's a huge selling point for these shares, at least for me. 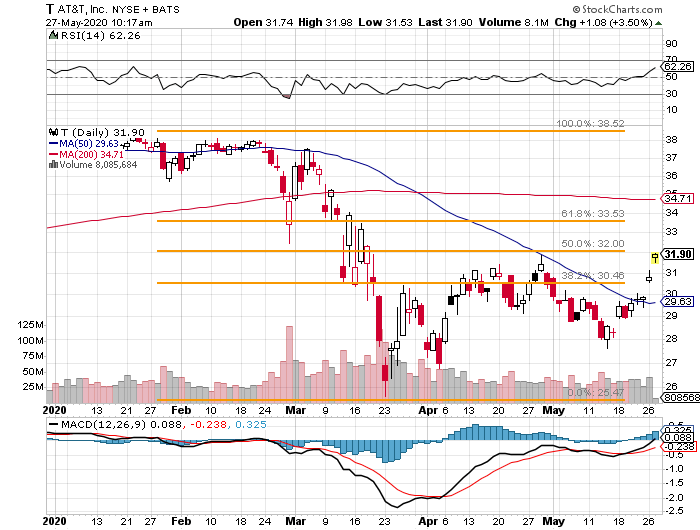 Though I love the dividend, these shares are currently enjoying a second consecutive gap move higher and now likely (just an opinion) hit technical resistance at the $32 level where they have hit resistance before in late April. This also happens to be a 50% retracement of the 2020 selloff. My thinking is simple. Shave to position right here, close to $32. If it comes in, buy back the portion sold close to the 50 day SMA ($29.63). If the shares don't some in, hey, you're ringing the cash register.

(Disney, Amazon, Apple, and Verizon are holdings in Jim Cramer's Action Alerts PLUS member club. Want to be alerted before Jim Cramer buys or sells these stocks? Learn more now.)

Get an email alert each time I write an article for Real Money. Click the "+Follow" next to my byline to this article.
TAGS: Dividends | Investing | Stocks | Technical Analysis | Trading | Media | Telecommunications | Consumer Products | Telecom Services