Some of the high-profile banks will unofficially kick off what we in the industry refer to as "earnings season" late next week. The fact is that the quarterly kick-off has become a less defined event ever since the pre-split version of Alcoa (AA) abdicated the lead-off spot. There will be a few stragglers ahead of JP Morgan (JPM) , Citigroup (C) , and Wells Fargo (WFC) . Some traders will point to this Tuesday's pre-opening quarterly financial results to be released by PepsiCo (PEP) to be the true start of the season. So, deck the halls. On one knee in front of the dugout, rubbing pine tar on the lower half of the wooden bat is our lead-off hitter.

The Quarter At Hand

Industry expectations for PEP's second quarter is for EPS of $1.50 on revenue of $16.42 billion. If realized, these numbers would be earnings "growth" of -7.3% on revenue growth of +2.1%, clearly underperforming what the industry expects of the S&P 500 in aggregate (-2.6%, +3.6%) going into this season. Yet, the stock, at +8.9% has outperformed the index (+2.7%) by a wide margin over the past three months. I do get the whole reach for defensive types investing theme as a method for coping with them uncertain, but PEP has even beaten the Consumer Staples sector as defined by the SPDR ETF (XLP) , which is up 6.8% over that same time frame. Consider this: Consumer Staples currently trade at an above the market 19.5 times forward looking earnings, slightly above the sector's five year average of 19.1 times. PEP trades at 22 times. It would be easy to label PepsiCo as overvalued... unless one labels PepsiCo as "best in breed" in order to justify the pricing.

Let's go back to mid-April. The stock reacted well to pedestrian EPS growth of 1% on revenue growth of 3%, suggesting that investors are looking beyond the headline for this firm, unless being the first big name out of the gate in the wake of the the gloom and doom dished out by Morgan Stanley over the weekend provokes an algorithmic response in this case (entirely possible). Going back to Q1, the firm reported organic revenue growth of 5.2% that was impaired negatively by an exchange rate impact of -3%. Pepsi improved on both core gross margin (55.9%), and core operating margin (15.48%). Both metrics remain key. Going forward, the firm guided the full year to EPS of $5.50, which would be a down year from 2018's $5.66. This should be priced in. The majority of the growth for the firm in Q1 came from Frito-Lay North America. While I don't think investors will take snack foods for granted, a renewed focus may be placed upon Latin America as a segment, and Beverages North America as segments that have grown but more slowly. 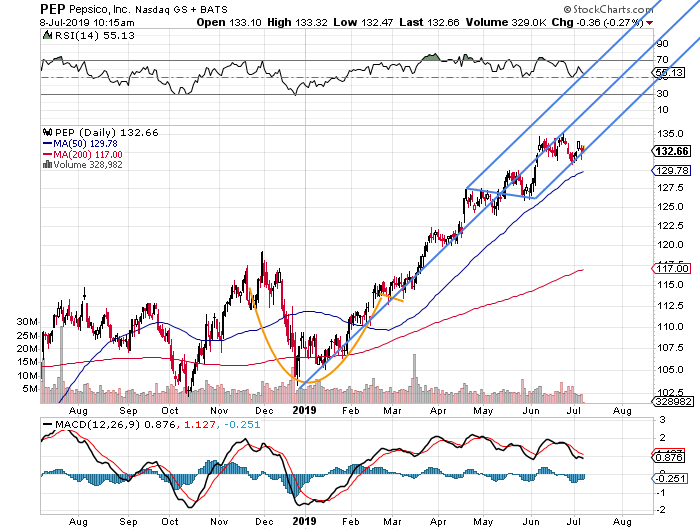 The problem with this chart may just be the dramatic slope of the year to date rally in the name. The cup with handle pattern that straddles the new year leads to the blue Pitchfork model that is now under severe pressure. The has been twice tested resistance at the $135 level that has until now, held. I think there is a tremendous chance that some trader take profits ahead of, and perhaps even after the results are announced, regardless. In order to proceed in good health, I would think that the tiny basing pattern between $130 and $135 that has extended into it's fifth week might go a little further, or maybe test the 50 day SMA, which this stock has not so much as kissed since February.

I do not dislike the name. I recognize the chance for some overt volatility running through at least the rest of the week. I do, however have an idea.

Notes: The trade is obviously short-term bearish, but works in similar fashion if reverse engineered for a bullish trader. I just thought of this trade, so obviously, I will wait until publication prior to taking action. That could take a while, but I do expect to put something similar on later today.

2) By purchasing two calls, the trader limits the equity risk to $3.47, while adding the opportunity to benefit from a potential break of current resistance.

Get an email alert each time I write an article for Real Money. Click the "+Follow" next to my byline to this article.
TAGS: Investing | Options | Technical Analysis | Trading | Food & Drink | Earnings Preview