Palo Alto Networks (PANW) released the firm's fiscal fourth quarter performance on Wednesday evening. Guidance looked awkward. The fast money sold the stock hard. The firm held a post-earnings investor event in order to do some explaining. The fast money turned on a dime. A big minus tick turned into a panicked grab for shares. So what now? Let's dig in, shall we?

For the quarter, the firm reported adjusted EPS of $1.47, a nickel beat... on revenue of $805.8 million (+22.4% y/y, also a beat). The firm also reported that billings, which is used as a metric for sales growth, printed at $1.057 billion. That number also presents as 22% growth, and also beat consensus. In addition, Palo Alto announced the $75 million acquisition of Zingbox, a start-up, whose "Guardian" cloud-based platform provides security for Internet of Things (IoT) devices.

What is clear is that both earnings and revenue growth, though still quite strong, are decelerating. The firm guides fiscal full year 2020 adjusted EPS to a range of $5 to $5.10. This is well below what had been consensus view of roughly $6.25. The firm also cut expectations for free flow margin from 37% to 30% for 2020, while guiding fiscal Q1 revenues toward $760 million to $770 million. At the mid-point, this would be year over year growth of 16.6%, and would be the fourth consecutive quarter of slowing growth if realized.

While none of those numbers are truly awful, they surely do not inspire. Why then, did the shares turn sharply for the better on Wednesday evening? During the post-earnings event, the firm stated a belief that a 20% compounded annual growth rate is achievable for both revenue and billings for it's cloud-based security products going forward. This, they believe, can provide free cash flow of roughly $4 billion by the fiscal year 2022. That is your reason for the turn-around. Mid to long-term guidance for both free cash flow and revenue generation outweighed sloppy first quarter guidance. For now. The firm still has to perform.

Since early this (Thursday) morning, I have noticed opinion stated by nine members of the analyst community that are rated at four stars (out of five) or better. All nine kept buy ratings on this stock, however four members of this crew did lower target prices. Cause for concern? I don't know how much faith you put in the analyst community. I do read what they say. The average target price of the nine pieces that I found today is still $278. The average of the four who cut their TPs was still $274.25. As I write this piece the shares are trading around $213, about $5 off of the open, but also off of the lows of the session. This crew is undeniably still bullish. As I have stated before, cyber security is a field where there will be demand for CapEx regardless of the overall health of the economy. Palo Alto's longer-term guidance is indicative of this. That does not mean that there will be not be some losers. I think Zscaler (ZS) , a direct competitor of Crowdstrike (CRWD) has struggled almost since I gave that one to you. Crowdstrike, by the way, reports this evening. 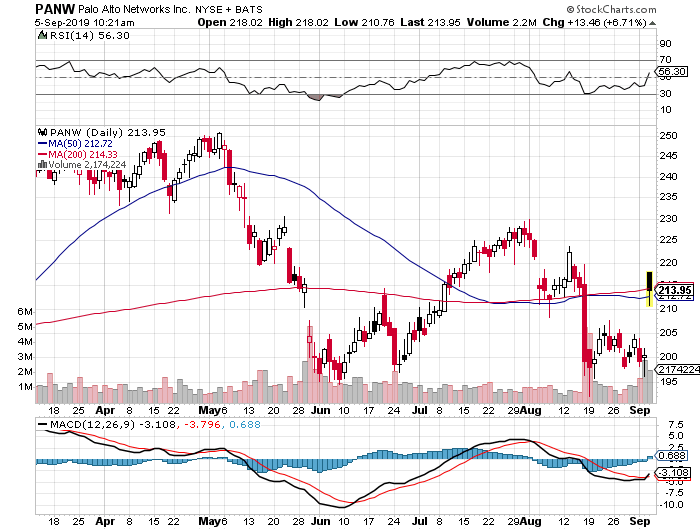 What I see here is a reading for Relative Strength that is off the mat. I see a daily MACD, that is trying to get bullish, but with the three EMAs (12 and 26 day) still deeply in negative territory. Two items present as important to this trader. First, the shares must hold the 50 day SMA of $212.72, not only for the closing bell, but for the week. Secondly, with that 50 day SMA less than $2 shy of the 200 day SMA of $214.33, there is potential for a "golden cross" in the near future. This, in my opinion, can provoke algorithmic response that a momentum trader might be able to ride.

Though I like the space, and don't dislike the name, I have already shorted PANW $217.50 calls expiring tomorrow (Friday) after the shares failed there on the open, so I guess that has to be my trade idea. As I write this, those calls are trading for roughly $0.85, so the value is diminishing. I think perhaps a trader might need a buck in order to justify the risk, but that's just me.

Get an email alert each time I write an article for Real Money. Click the "+Follow" next to my byline to this article.
TAGS: Earnings | Investing | Stocks | Technical Analysis | Trading | Software & Services | Stock of the Day