Trading Apple (AAPL) . I know, I know. Jim has always said when speaking about this name... "Own it, don't trade it." Easy to take heed of those words when one is an investor. I, too, see reason to be long the name, longer-term. Who can argue with the strength of the firm's balance sheet, or the direction that the firm has taken in moving toward services bolstered by a massive user base, and less by iPhone sales? Still, harder to take such advice when one is a trader. What to do, when one thinks of him or herself as both?

It had been so long since I had traded out of my Apple long position that I had to search my trades to tell this tale. Apparently this time, I really did ace "the out", initiating that move in January and making the final transaction in early March when the shares last kissed the $300 level. I did not, however, ace the reentry, and stand here empty-handed as the firm approaches this Friday afternoon. I do not regret a large cash position. The names I am in have performed well over recent weeks. Those shares though? They remain on my book, only in the form of the cash position that they helped create.

My thoughts upon exit had been to reenter at $225. The shares were only that cheap on one day, the market low of March 23rd. I balked. Who didn't? Those shares have never looked back. What's a market participant to do at this point? I don't really want to jump on board ahead of this week's numbers. Buying some shares back anywhere below where I went out is still some sort of victory, though only in the sloppiest sense. This is the story of my journey toward making a decision this week on this name. Welcome aboard as I pursue this quest.

There was Apple related news on Monday morning. The Wall Street Journal reported that the firm would push back mass production for the coming 5G capable lineup of iPhones due to disruptions to supply chains caused by coronavirus related shut-downs. The firm is also expected to cut the number of handsets that will ship over the second half of the year. I am not really a gadget guy. There are other writers who will gladly go over what kinds of smartphones will be available and when. As a decision maker, I just hear delays, and less product to be made available. I also think about a wounded consumer who will in all likelihood, be a far less aggressive animal going into this year's holiday season than any in our memory. I mean, just from a common sense point of view, for the average kid, if your phone is working, you probably are not replacing it.

This announcement really comes as no surprise. Analysts have been talking about how far behind Apple was in production in terms of week, in some cases many weeks. They also have been talking about the firm's ability to repurchase shares and pay out its $3.08 dividend. In fact, there is plenty of scuttlebutt that perhaps the firm increases the repurchase authorization in length or adds to that dividend. That, in my thinking, in this environment could be a much greater positive than any potential for disappointment that may come out of the quarterly performance. The risk will come in the guidance, which will likely provide impetus for a wild move, direction unknown. Options expiring this Friday appear to be pricing in a $7 to $8 move which just seems too small to me. I mean that's a sub -3% move. Just seems like the risk is greater than that. To me.

The investor wants to see a surge in demand for the firm's services businesses. The App Store, Apple Arcade, and the iCloud have added availability in 20 new countries. Apple Music adds 52 more. I would not expect to hear a lot of contribution made from Apple TV+, or the Apple Card, but more in the way of plan development might suffice. The realm future may be in the development not of the AirBuds product which has been the hot ticket, but in the further use of Apple Watch as a tool meant to enhance the firm's attachment to the now ever-growing business of healthcare... all at a regularly recurring revenue. That smooths out corporate performance if successful in times of disruption.

The Street is looking for EPS of $2.27 versus $2.46 a year ago. Revenue is expected to land around $54.6 billion, which is close to a 6% decline year over year. I think meeting these numbers would be nice, but not imperative. You'l recall Apple warned on the impacts of this virus much earlier than everyone else as the firm is so reliant upon Chinese and Asian production, not to mention the Chinese consumer. I am holding my fire ahead of earnings, but I do have a plan. 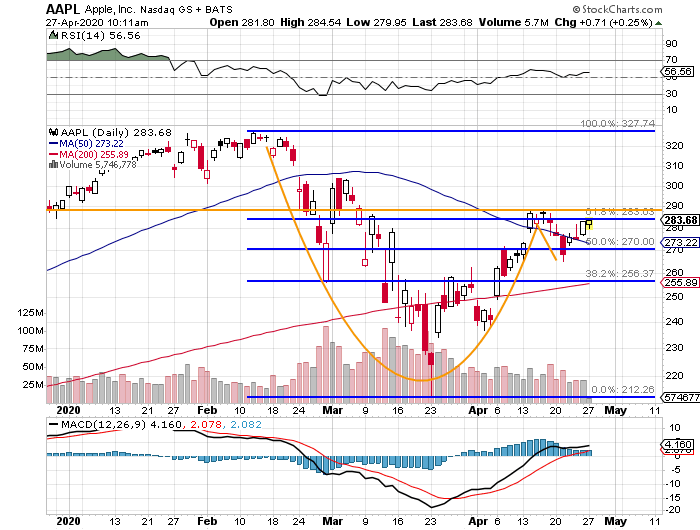 As readers will note, the recent mid-April weakness put a handle on the orange cup. The pivot for AAPL ends up just around $288, which is not too far from where our favorite twelfth century Italian mathematician might have placed resistance if here were here to draw this chart. The shares have retaken the 50 day SMA which could be important.

What a trader who comes in with no position in Apple could do without committing to an equity trade ahead of time, and this is just an idea... is this. And, of course, in minimal lots:

Second note: I may wait a day or two for a better (cheaper to maybe even a net credit) options trade to develop, but this is more or less the template I am using in my head.

Get an email alert each time I write an article for Real Money. Click the "+Follow" next to my byline to this article.
TAGS: Earnings | Investing | Stocks | Technical Analysis | Trading | Software & Services | Technology | Technology Hardware & Equipment | Telecom Services | Coronavirus