I had heard the name before. Not really sure where, but to say that Seattle Genetics (SGEN) had been on my radar when Jim Cramer mentioned the firm almost two months ago on his Mad Money show would be a lie. New York was under attack. My neighborhood was under attack. I was under attack. The stock, the firm itself, was not one of the big pharmas or elite biotechs working on solving Covid-19 through either a vaccine or a therapeutic, and that was all I was worried about at that time. The shares would rally on Jim's positive mention. The selloff then rally again as Goldman Sachs added the name to that firm's "Conviction List" (with a $246 price target) in late May based on a number of promising cancer treatments that the firm has in their pipeline. Is it too late to jump on? The shares did run 6% on Friday. Let's take a look.

Just a couple of days after the Goldman story, Seattle Genetics announced some positive exploratory results (including survival) for TUKYSA in patients suffering from HER2-positive metastatic breast cancer. The early results showed that these patients experienced a 42% reduction in the risk of death, and a 68% reduction in the risk of CNS disease progression or death. TUKYSA is meant to be a treatment in the fight against certain breast cancers where patients also develop a brain metastasis.

The firm also has another high profile candidate known as Padcev. Padcev has already been approved for the treatment of locally advanced bladder cancer. Seattle Genetics is cooperating with Merck (MRK) to combine Padcev with Merck's own blockbuster cancer drug, Keytruda.

Let's be honest. SGEN is already up threefold in just about nine months after being around for roughly 20 years. The firm is obviously fast becoming a real player in creating treatment for certain cancers. The firm still loses money. Earnings have been negative though revenue has been growing quite regularly. As a numbers guy, there are still a lot of good reasons to walk away and find somewhere else to place my hard earned dough. There are plenty of minus signs in places and you do not want to see them. EBITDA. Profit margin. EPS. A price to sales makes the shares look awfully expensive. Yet, technically, the set-up is there. Let's take a look. 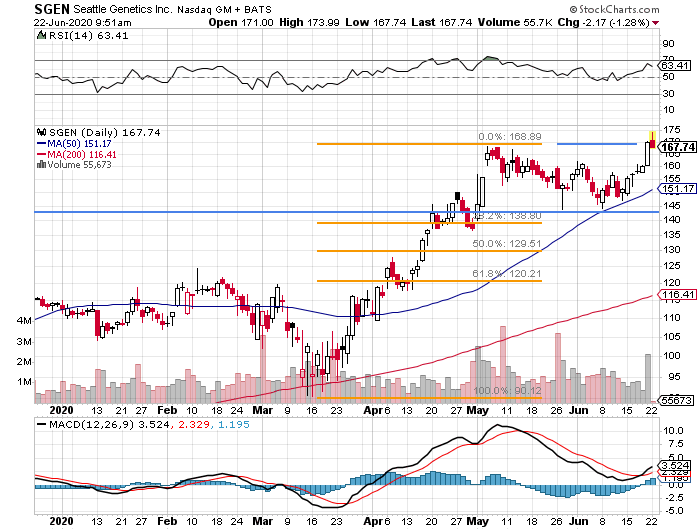 What do I see? I see a stock that ran literally from the low $90's in mid-March to roughly $168 in response to Jim's mention on his show. Since then, we have what is known as a Flat Base, which is a form of consolidation after a run like that. The base is supported at the bottom by our old friend, Fibonacci, and are finding resistance both on Friday as well as this morning at the pivot created in early May.

Get an email alert each time I write an article for Real Money. Click the "+Follow" next to my byline to this article.
TAGS: Drug Approvals | Investing | Stocks | Technical Analysis | Trading | Pharmaceuticals

Some retailers are faring well while other are not, and it has a something to do with the income levels of their customers.

Urban Outfitters Is Showing No Signs of Renewal

Shares of the retailer are likely to work still lower in the months ahead.

Look in the Basement for Bargains, If You Dare

The ranks of companies trading below NCAV has been somewhat barren for a while, but you never know what you'll discover 'down there.'

Rocking a Trade in Live Nation

You could improvise a trade in this concert name, but don't get yourself in a jam by becoming a total stock groupie.