Regular readers well know that I have long touted Zscaler (ZS) as a "best in class" type cybersecurity name due in large part to the firm's early adoption of security through and from the cloud. Not to mention, more broadly, the pressing need for what Zscaler and it's more elite competitors do for corporate America. The stocks have come in a great deal, as more generally have software stocks and even broader than that... tech stocks. That, my friends, I think was kind of like throwing the baby out with the bathwater. While a pending move from remote work back to on-premise work might negatively impact many stocks that benefited during a pandemic economic shift, cybersecurity... in my opinion will prove itself quite durable, as demand will stand up to any shift in where white collar work is done.

Last month, Zscaler reported the firm's fiscal second quarter. You may recall that I covered that event at that time. Both adjusted earnings and revenue generation beat the street. That revenue, by the way, showed growth of 55% over the same period last year. Both adjusted operating margin and billings crushed expectations. Demand had been strong and increased post-SolarWinds (SWI) . Then there were the problems that arose at Microsoft (MSFT) .

Earlier this week, five-star analyst (rated by TipRanks) Joel Fishbein at Truist Financial met with Zscaler management. Fishbein said, "The company's unique and innovative approach to security targets a well defined (rough) $72 billion total addressable market not including potential adjacent market expansion opportunities. We think the company stands to grow revenues by at least 40% over the next few years while expanding margins in the long term due to efficiencies in its operational framework." I actually looked for an opportunity to crop that quote, but I liked the whole thing, so I left it alone. Fishbein upgraded ZS from a "Hold" to a "Buy", while taking his price target from $175 to $225.

Just a week earlier, the also (even more) highly rated Michael Walkley at Canaccord Genuity maintained his buy on the name and set a $250 price target. On that same day, Dan Ives at Wedbush who needs no introduction, proclaimed a "new age" for cybersecurity in general, and placed a high level of conviction in owning the "secular winners" as he expects a surge not just in demand but perhaps also in industry wide mergers and acquisitions. Several favorites were named, and Zscler was among that elite grouping. To be fair, so were key competitors Palo Alto Networks (PANW) , and Fortinet (FTNT) . Ives already rates ZS as a "Buy" with a $240 price target. 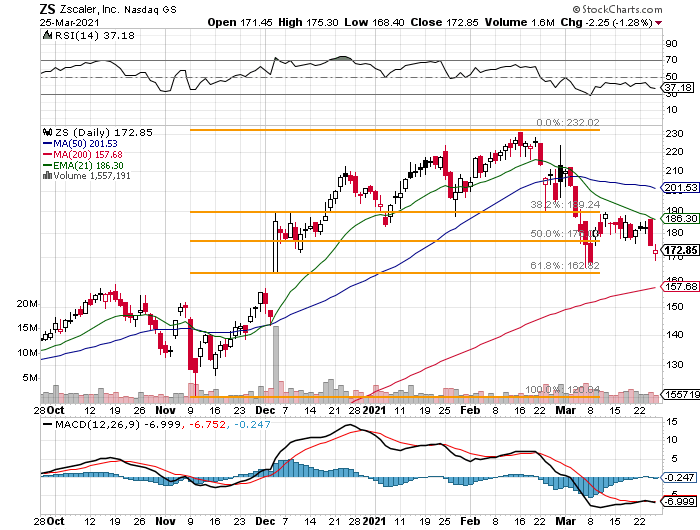 First off, I have lightened some positions going into the end of quarter rebalancing next week, and probably will do a little more trimming on Friday if stocks stay green. Zscaler will not be one of my cuts. Interestingly, the shares have found support at the 61.8% retracement level of the entire November through February rally. That could mean that there is significant support down a rough $10 from here.

Unfortunately, if the stock does try that spot again, the gap created in early December becomes exposed and as readers can plainly see... this gap has not yet been filled. The gap closes around the $158 level which also just happens to be very close to the 200 day SMA. This could act like a magnet, or as a moth to the flame.

You can add some equity here if it improves one's net basis. I don't see the need to. I am much lower. That's optional. Earnings are due in late May. I am willing to scale ZS in from here, or get paid to wait even if the opportunity never arises. I am seeing the May 21st $160 puts values at a rough $7.40, and the same expiration date $150 puts valued at roughly $4.70. In my opinion, at these discounts and with these sizable premiums, are attractive for a sale.

One caution. As one sets about to write these puts, one must also be fully cognizant that the market is thin for these two series, and trading volume light. A trader will have to be patient to get a fair price, and personally I would rather walk away than sell these puts on the bid side. Know what I mean? Be careful. No market orders.

Get an email alert each time I write an article for Real Money. Click the "+Follow" next to my byline to this article.
TAGS: Investing | Markets | Put Call | Stocks | Technical Analysis | Trading | Cybersecurity | Analyst Actions