Bottomless pit? I know that I've told you my quicksand story. No need to go over that one again. One place where there does seem to be a bottom would be where it concerns Micron's (MU) financial performance, or at least that's what we were told on Wednesday evening. The stock coated overnight, and opened up more than 3% on Thursday morning. You thought this was the numbers? It's more complex than that.

Now, we know that not just for Micron, but for the broader memory chip business, as well as the even broader semiconductor and semiconductor equipment industries, that the past year has been one of overcoming adversity. From the collapse in demand for block chain mining related to demand for crypto-currencies to reduced trade with China, that included the Huawei ban, to a reduced pace in the expansion in capital expenditure by many cloud based software firms.

On those fronts, one could hardly call the newly announced trade truce with China a permanent end to the trade war, but Micron has told us that the firm has received all requested licenses necessary to continue to support what businesses of Huawei's are not on the banned list, and that Micron is also licensed to qualify future products aimed at supporting Huawei's mobile and server business lines.

Micron does make mention that cloud created cap-ex is already on the rebound, however forward guidance is unspectacular. For the current quarter, the one termed "the cyclical bottom", Micron sees EPS in a wide range of $0.29 to $0.41. Consensus had been for $0.41. The firm sees revenue for this quarter at $4.5 billion to $4.8 billion. Consensus is currently at $4.8 billion. So, it's a guide down by any measure, but "bottom" is a strong word. On that note, CEO Sanjay Mehrotra said, "Our significantly improved competitive position, dramatically stronger product portfolio, structurally higher profitability and investment-grade balance sheet position Micron very well to drive long-term shareholder value." 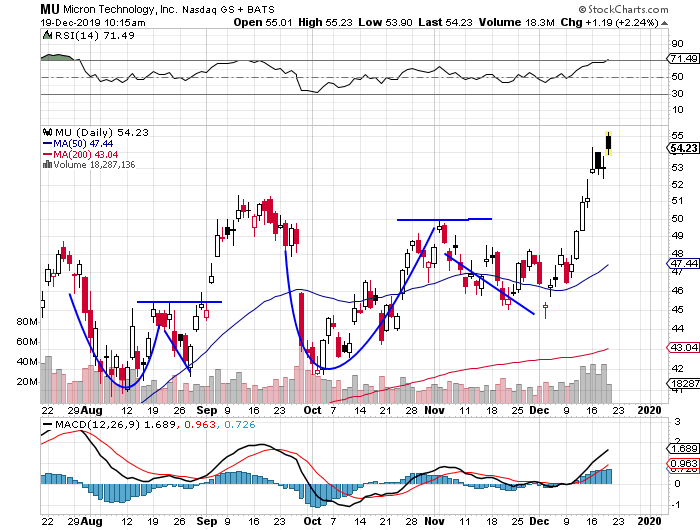 One plainly sees that these shares have screamed past the $50 pivot created by the October cup with the November handle. In all honesty, if I were long this stock, which I am not, my target would probably be in the $60/$61 area. That said, the ascent looks quite unsustainable, meaning that charts generally just don't look like this.

Relative Strength appears overbought. That might be said of the entire sector, or even the entire market right now. The daily MACD looks very strong. A number of highly rated analysts have chimed in since last night, mostly positive, generally with target prices in between $56 and $70. Two real outliers... Hans Mosesmann at Rosenblatt upped his target from 80 to 100, and Christopher Danely at Citigroup maintained his Sell rating, while bumping his target up from $35 to $38.

Notes: This trade is in expectation of some profit taking into the weekend. Basically, the trader has capped both profit and loss at a rough five and a half bucks over the next month. These options trades are essentially free to the trader as capping profit on the short equity position works to subsidize the purchase of protection to the upside.

Get an email alert each time I write an article for Real Money. Click the "+Follow" next to my byline to this article.
TAGS: Earnings | Investing | Markets | Stocks | Technical Analysis | Trading | Semiconductors & Semiconductor Equipment | Stock of the Day

Jim Cramer: Here's the Reason I Subscribe So Often to Staying the Course

If you had missed these last two days you may have missed 48 hours of the most important gains of the year.

I Like the Setup on Box on the Daily Chart

I would anticipate exiting a portion of this trade before they report earnings later in May.