With the markets closed Friday ahead of the Easter holiday, Jim Cramer laid out his game plan for next week's action during his Mad Money program Thursday night. He said all eyes will be on the latest Covid-19 numbers on Monday. But on Tuesday, earnings will begin with JPMorgan Chase (JPM) , and Cramer was a fan of owning the banks for their dividends. Let's visit with the charts of JPM.

In this daily bar chart of JPM, below, we can see that prices were nearly cut in half from early January to the nadir in March. Support from the lows of 2019 around $105 was easily broken on the way down. Prices have rebounded in recent sessions to that former support area which is likely to act as a potential resistance zone as the roles of support and resistance reverse.

The daily On-Balance-Volume (OBV) line declined sharply in February and March telling us that sellers of JPM were aggressive. We now see that the OBV line has moved up from its March low suggesting a shift back to aggressive buying. This change in direction is promising.

The Moving Average Convergence Divergence (MACD) oscillator crossed to the upside in late March for a cover shorts buy signal. This indicator is still well below the zero line so we are not likely to see an outright long signal for a while.

In this weekly bar chart of JPM, below, we can see that prices broke the lows of 2019 and the low of late 2018. Prices are below the declining 40-week moving average line.

The new low for the move down on the weekly OBV line refreshes a downtrend that started back in early 2018. The MACD oscillator on this longer time frame is an outright sell signal.

In this daily Point and Figure chart of JPM, below, we can see the recent accumulation pattern and a potential upside price target of $146. Impressive. 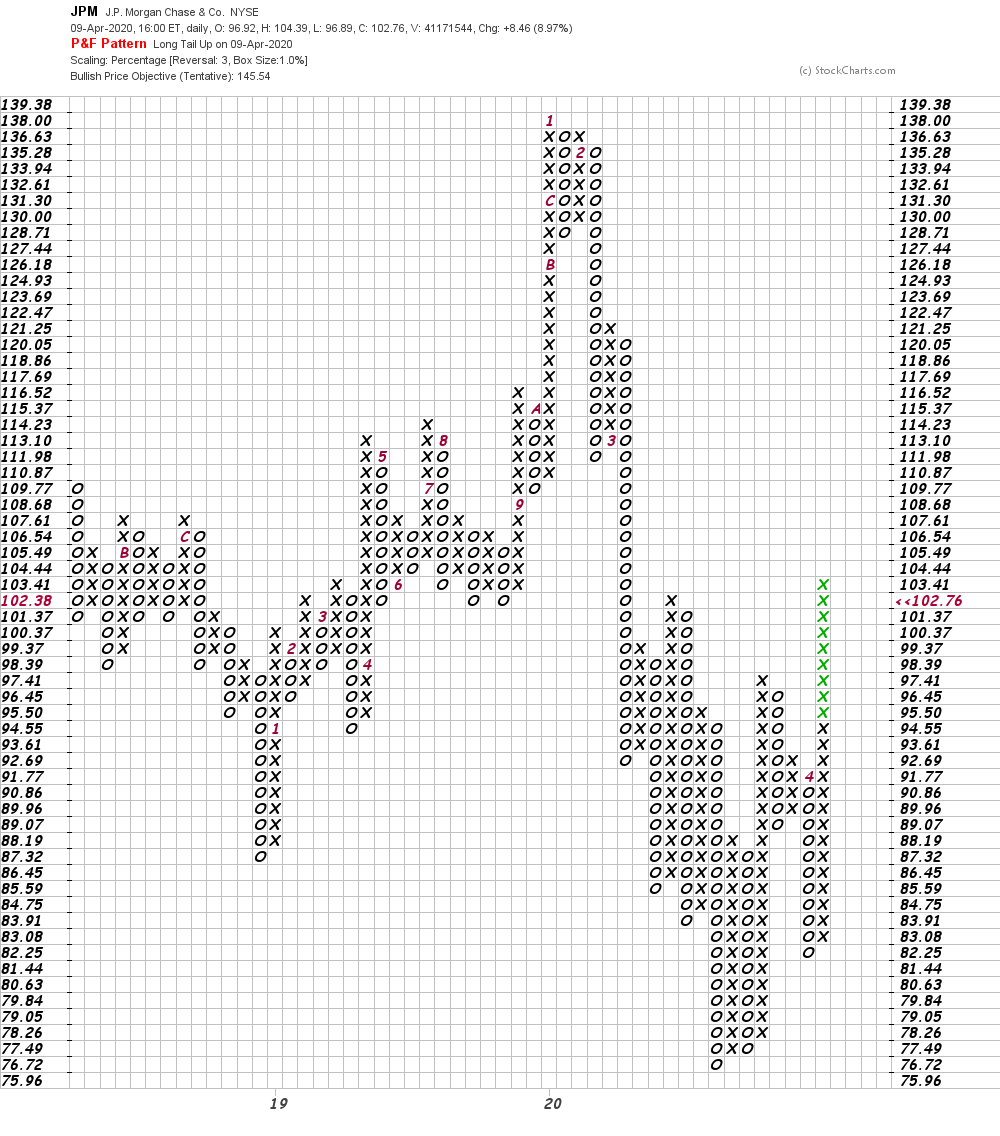 Bottom-line strategy: There are many investors who are long-time fans and believers in Jamie Dimon and JPM. They did well on his coat tails but the big selloff this year has done a lot of damage on the charts. Even though the Point and Figure chart shows a big upside price target, I am not convinced that JPM, and most banks for that matter, will quickly return to the kind of profitability they have seen in the past. If you decide to go long JPM or add to existing longs you should risk a close below $89.

Get an email alert each time I write an article for Real Money. Click the "+Follow" next to my byline to this article.
TAGS: Investing | Markets | Stocks | Technical Analysis | Trading | Banking | Financial Services | Mad Money | Earnings Preview