I got an email from a Real Money subscriber the other day - "Hey Bruce. I enjoy reading your technical takes and you've helped me make some money and more importantly, cut some losses over the years. I'd love to know what you think about ARK Innovation (ARKK) after the well-documented bloodbath."

I decided to google the symbol ( ARKK) and quickly got 8.17 million citations. Wow. Obviously a lot of interest in this security. Let's check out some charts.
In this daily Japanese candlestick chart of ARKK, below, we can see that prices are up four-fold in the past 12 months. Prices rose $50 from November to the middle of February and now a correction is unfolding. Prices are now trading below the declining 50-day moving average line. The slower-to-react 200-day moving average line still has a positive slope and intersects nearby at around $108.
The trading volume has been heavy since the middle of February suggesting that traders have been voting with their feet.
The On-Balance-Volume (OBV) line has declined sharply since the mid-February peak and tells me that sellers of ARKK have been very aggressive.
The 12-day price momentum study in the bottom panel of the chart is showing the start of a bullish divergence with a higher low in late March than early March as prices have made equal lows.

In this weekly Japanese candlestick chart of ARKK, below, we see a mixed picture. Prices made a large base around $40 before their four-fold advance. Prices are above the rising 40-week moving average line but very close to a more serious test of the line.
We see some recent lower shadows near the $110 level suggesting that traders are rejecting the lows. There is chart support in the $107-$90 area.
The weekly OBV line shows a very steep decline and tells us that there has been very aggressive the past two months. The Moving Average Convergence Divergence (MACD) oscillator crossed to the downside last month for a take profit sell signal.

In this daily Point and Figure chart of ARKK, below, we can see a potential downside price target in the $107 area. This could mean we could see a test of the top end of chart support. 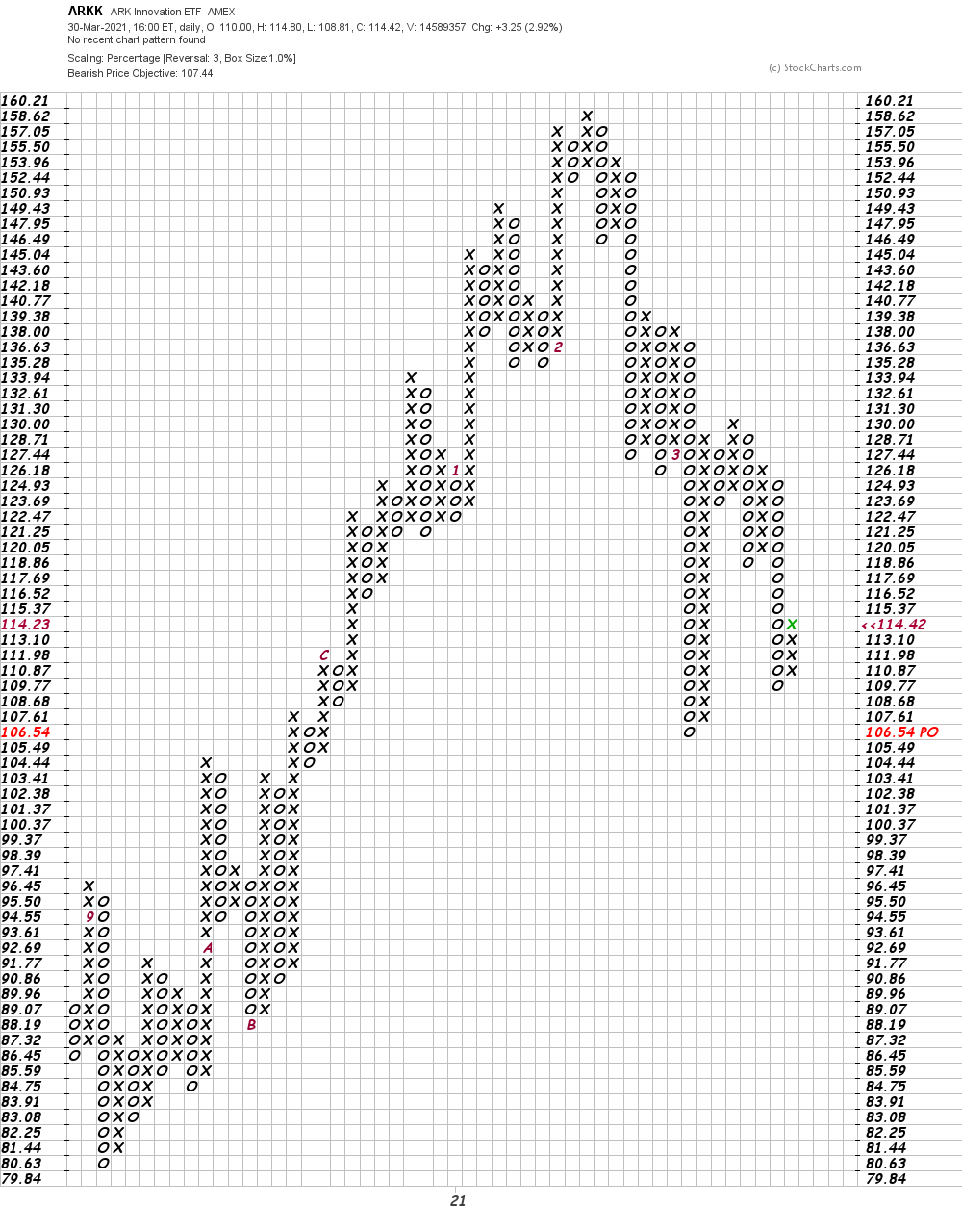 In this weekly Point and Figure chart of ARKK, below, we see that the software is projecting the $54 area as a tentative downside price objective.

I will let you think about these charts which look bearish to me right now.
Bottom line strategy: ARKK has produced impressive gains but it looks like it is still in a correction phase. I would want to give the correction more time to play out but I would put ARKK on my second quarter shopping list. Aggressive traders who believe the correction is over could go long if they use a $109 sell stop.
Get an email alert each time I write an article for Real Money. Click the "+Follow" next to my byline to this article.
TAGS: ETFs | Investing | Markets | Stocks | Technical Analysis | Trading | Technology