It's no secret that I have been high on Microsoft (MSFT) for quite some time. I certainly have written enough on the stock, it's various businesses, and just how high an opinion I have of CEO Satya Nadella. He's got one of those brains, that when he speaks... you just step back and think. Not a lot of folks can do that. We have long held Microsoft as a core position, as we have expected a lot out of it's hybrid cloud businesses. It's no secret that Azure has been steadily gaining market share on Amazon (AMZN) Web Services, while fending off Alphabet's (GOOGL) Google Cloud. You see, Azure provides the same stack used in the public cloud, which allows for businesses a certain flexibility in terms of scalability and flexibility, and in making use of their own on premise data centers.

Beyond the cloud, our faith in the name is driven by an evolution away from the sale of a software license here, a video game there, or a premium social media service elsewhere to a recurring revenue, subscription driven model. Gamers will subscribe to XBox, and the individual games. Businesses will subscribe to Office 365, Dynamics, and Teams. Job seekers - about to become very important - and potential employers will subscribe to the premium version of LinkedIn. In addition, like Apple (AAPL) , Microsoft is making progress toward producing its own in house processors to support the cloud businesses. How much this hurts the Intels (INTC) and Advanced Micro Devices (AMD) of the world, we just don't know yet, but it will leave a mark.

At first glance, I can pat myself on the back. Microsoft has performed very well in 2020, up 41.1% year to date. That seems excellent relative to the 14.4% return posted by the S&P 500, and even the 39.7% increase this year experienced by the Technology Select Sector SPDR ETF (XLK) . Taking a broader look... The Nasdaq Composite closed on Monday up an even 42%, and the Nasdaq 100 up an astonishing 45.3%. In retrospect, has Microsoft more or less just performed with it's peer groups?

I think the answer, although the returns are nice, is yes. In addition since peaking in very early September, these shares have been mired in a long period of basing consolidation. Then again, that is healthy. I think.

Microsoft found itself the beneficiary of kind words dispensed by highly rated (5-star at TipRanks) sell-side analysts on both Friday and Monday. First, last Friday, Morgan Stanley's Keith Weiss maintained an 'Overweight" rating on MSFT, while increasing his target price from $249 to $260. Weiss acknowledges the sideways move over several months, as well as tough compares coming up, but sees these compares as possibly priced in, leaving room for an upside beat when they report at the end of January.

Then, on Monday (yesterday)... Citigroup's Walter Pritchard upgraded MSFT from "Neutral" to "Buy", while increasing his target price from $229 to $272. Pritchard expects further acceleration in the adoption of the business cloud, and favors Azure over the competition, just as we have above. Pritchard also sees increased demand for Office 365 premium.

As noted above, I have maintained a core long position in MSFT for quite some time. I am up six figures in percentage terms, since initiation, but nothing in three months. So, what's the plan? Let's take a look. 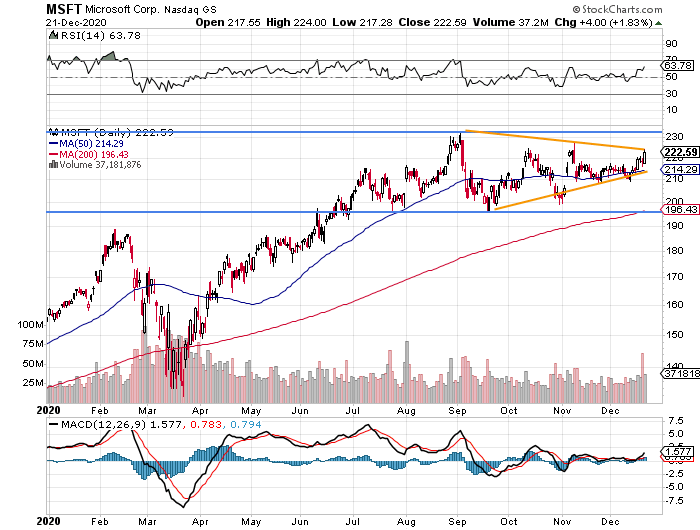 Readers will note the period of consolidation that dates back to September 2nd on the resistance side, and really as far back as late June on the support side. Now within this basing period exists a pennant (a little sloppy, but it is there) three months in the closing. This, in theory, should produce an explosive move that could go either way. Not bullish nor bearish, this look often foretells coming volatility. Might just be instinct, but I think the shares go north from here, and this might just be that breakout.

How will we know? We won't at least for a few days. The pivot is that September high of $232. My target price, should $232 be taken, will be $278, just a bit higher than Pritchard's. On the panic side, I am moving that point up to $214 (50 day SMA) from $195. I don't know why I still had my panic point down in the $190's. Chalk it up to human error. Those looking to knock a couple of bucks off of net basis (if already long) could still sell (covered) $245 January 29th calls for $2 and change. That would be the most risk averse way to manage this position.