Hmm...Very interesting. I mean, sure, we all know that defense and aerospace can be a wildly lucrative business. Lockheed Martin (LMT) has long been a Sarge fave. I would have to do more work than it would be worth to figure out the date of the last time I had been flat this name. That said, I do adjust my exposure and I do take at least partial profits whenever this name overruns one of my target prices. The Covid-19 public health crisis had put a bit of doubt in the back of my head though. Unlike the deep (at the time) December 2018 selloff where I knew money would still pour into the group and I also knew that this president would pressure allies into increased defense spending, this crisis, despite forced increased deficit spending across the globe, actually threatened (in my opinion) to pull fiscal policy away from defense in order to spend where the need was more immediately necessary. Today surprised me a bit. For that I am glad.

Back in May, Lockheed Martin was forced to announce that the pandemic was impacting suppliers, and that production of the highly lucrative F-35 stealth fighter aircraft would have to slow. Fact is delivery of these fighters has slowed. The firm still outperformed expectations in a quarter where leadership changed hands. In June, James Taiclet took over as CEO in place of the very capable Marillyn Hewson. The contracts kept coming. It's as simple as that. Just this past Friday alone... the U.S. Air Force awarded the firm a $15 billion (with a B) contract to produce C-130J Super Hercules reconnaissance/special operations aircraft. These aircraft will be built in Georgia and the work will be completed by 2030. Quantity? That number is either indefinite, or classified. The very same day, last Friday, the U.S Navy awarded the firm an additional $935 million for additional work on the Navy's version of the F-35.

For the firm's second fiscal quarter, Lockheed Martin reported adjusted EPS of $6.13, which included a post-tax charge of $0.34 cents a share, or GAAP EPS of $5.79. Both numbers beat consensus. The GAAP number is good for earnings growth of roughly 17%. As for sales, revenue grew 12.4% over the same period last year to land at $16.22 billion. This beat expectations by more than $1 billion. Let me repeat, LMT beat revenue expectations by a boatload.

Revenue grew across the firm's four main business units from last year. Aeronautics (where the fighter planes are) contributed $6.5 billion in sales, growth of 17%. Rotary and Mission Systems (includes Sikorsky helicopters) produced sales of more than $4 billion, up 7%. Space (partially including hypersonic weapons development) saw a 6% rise to almost $2.9 billion. Lastly, Missiles and Fire Control (also includes some of the hypersonic stuff) grew an impressive 16% to $2.8 billion. The only segment failing to show increased operating profit was Space,and I think that at this time is understandable.

Perhaps the most impressive number is the backlog of orders. Lockheed Martin as of quarter's end is running with a backlog of $150.3 billion, up more than 9%... at a time when the orders were no sure thing, and orders from U.S. client states can not be counted on to spend as the pandemic rages on. That's quite a feat.

Lockheed Martin reiterated the firm's ongoing caution around the uncertain environment created by the Covid-19 crisis. The firm notes the efforts taken on its own behalf as well as some of the favorable contract awards that I only touched upon above. Then the firm raised guidance. No joke. Long time readers will recall that for years I have been pounding the table warning anyone who would listen that both China and Russia were ahead of the U.S. in hypersonic weapons development and that we had no defense against these weapons. Fortunately, that threat has been and will likely to continue to be taken seriously. Many had not realized that we here at home could be vulnerable. This is also an underlying reason for my ongoing support for Raytheon Technologies (RTX) .

Back to LMT. The firm increased full year expectations for EPS by a full dime on both ends of a range now spanning $23.75 to $24.05, while raising guidance for sales from $62.25 billion-$64 billion to $63.5 billion-$65 billion. Cash from operations is now looking to land equal or greater than $8 billion, up from guidance of $7.6 billion three months ago. 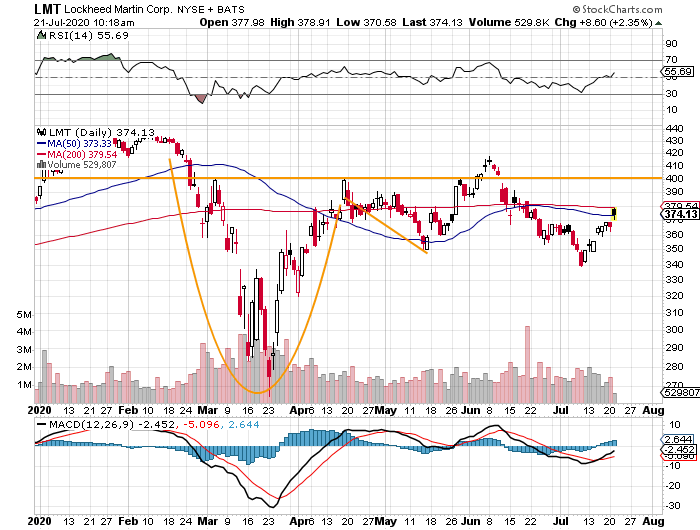 Okay, we got the set-up we were looking for. We almost got the break-out. We did take a partial profit when our old target was taken out in June. We raised the target to $490. Then the shares hit the skids. What now? The good thing about Tuesday morning's pop is that it places the shares above the 50 day line. Crucial it would be for short term results for this level ($373) to hold. Next step would be to force a "golden cross" as the daily MACD improves. Short of these technical developments, I have my doubts.

My plan currently is to add in between $340 and $350 (May and June lows). What I would love to see would be the completion of a new cup formation, and then a visible handle. Until I see something that forces creativity happen in the equity space, my thought is to go out a month at a time, so August 21st, and take a look at strike prices for calls up maybe $25 to $30 from the last sale, so in this case... $400, and if one can get paid $3 to $4 for those calls, make the sale as long as they can be covered by an equity position.

Get an email alert each time I write an article for Real Money. Click the "+Follow" next to my byline to this article.
TAGS: Investing | Stocks | Technical Analysis | Trading | Aerospace | Defense

These Nasdaq names are displaying both quantitative and technical deterioration.