We all make rookie mistakes, at least sometimes. At least that's what I tell myself when I recognize one in my own actions. I have written several times now about how both Amazon (AMZN) and Walmart (WMT) came through for me and my family during the worst of what New York went through back when that region was the epicenter of the U.S. outbreak of Covid-19. Grocery stores were open. There was nothing on the shelves. The city and its suburbs were truly on its knees. There was no way for a decent spell to purchase the necessities of life. Even food became scarce. E-commerce was survival for those trying to support a family. Amazon has won my loyalty. They were there when I was down. Walmart has won my loyalty. They were there when I was down. I felt that at least in my area, that Costco (COST) , a name that I had been long and very high on prior to the pandemic, had folded under the pressure. Maybe that's unfair. I was sick myself, in fact really sick, and still trying to support a household. I sold the shares in anger. Even though Jim Cramer remained high on the name.

Don't Get Me Wrong

It's not like the other two names hurt me. Amazon, as a matter of fact, has been a grand slam. Should have hung on to Costco though. I knew they were well run. I knew they would get it right. Anger is an emotion. Nothing wrong with that. Allowing emotion into the decision making process without regard to either target price or panic point? That's something rookies do. Fiscal fourth quarter earnings are still a ways off. Costco will not report until September 24th. That said, the firm easily outperformed expected comparable sales for the month of June (which is booked as the five weeks ending July 5th).

These comp sales increased by an impressive 11.5% for June. Estimates were for something between 4% and 5%. Performance was supported across all regions and segments. U.S. sales grew an even 11%, Canadian sales rose by 8.4%, and the rest of the physical Costco planet saw sales rise 18%. E-commerce sales (what got me so angry) saw growth just scream 85.8% higher versus a year earlier. Incredible. Year to date, net sales are now up $136.37 billion, which is 8.1% above last year's performance at the same point. This is despite decreased foot traffic for both April and May. That's impressive. The firm claims that "buy on-line, pick up at store" has become a popular method for purchasing essentials.

On Wednesday evening, I saw that Oppenheimer's five star (according to TipRanks) analyst Rupesh Parikh maintained his 'buy" rating on the name, while increasing his price target from $335 to $355. Parikh goes as far in his comments as to mention the possibility of the firm dishing a special dividend out to shareholders. Thursday morning, another five star name, Peter Benedict of Baird chimed in. Benedict reiterated both his "Outperform" rating and his $335 price target on the name. He also goes out of his way to note that at this point the firm is now "generating the strongest 2-year stack in at least a decade." 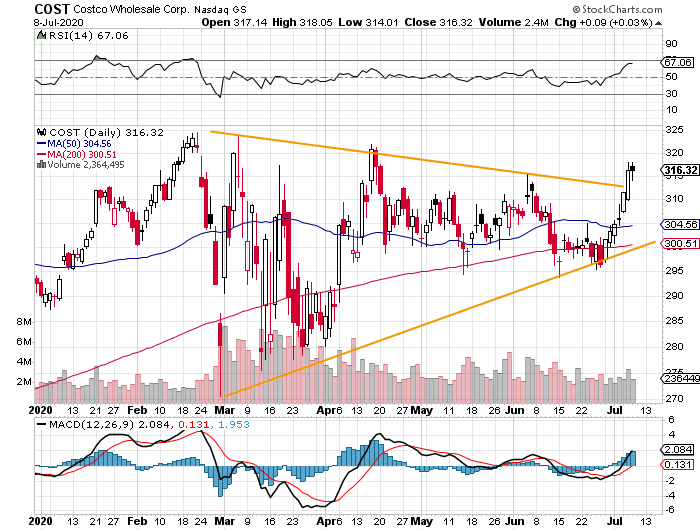 Chart watchers will note that what we see here is either a breakout from a closing pennant, or something that comes very close to presenting as an ascending triangle. In that case, the pivot becomes the $325 level, and the breakout, despite this recent surge, would still be a future event. Of course pivots provide resistance about as often as they do momentum. Ah, what to do? How to catch up? The shares were trading around $322 ahead of the opening bell.

The idea here is to reduce the trader's net basis ($317) to Wednesday's price levels.

This idea is to simply put $400 in the hip pocket. The flipside is the downside equity risk that this investor is exposed to should the share price drop below $276 by expiration.

(Costco and Amazon are holdings in Jim Cramer's Action Alerts PLUS member club. Want to be alerted before Jim Cramer buys or sells these stocks? Learn more now.)

Get an email alert each time I write an article for Real Money. Click the "+Follow" next to my byline to this article.
TAGS: Economy | Investing | Options | Stocks | Technical Analysis | Trading | Retail | E-Commerce

We need to recognize the conditions are different than in a bull market and adjust our style and tactics accordingly.