Every day, usually late in the day, I retrieve the snail mail from the mailbox in front of my home. More times it seems, than I like... I can barely get the mail that I need out of my normal sized mailbox. Why? Besides the constant stream of junk mail regularly taking up space in there, and besides the nice family of spiders that live in the back, there is often a puffy package jammed in there. A package containing at least one pair of yoga pants. Don't worry, I'm married. They are not mine.

Nearly everyday, at some point, I will also end up in the gym. Long have I noticed that every single woman in the gym wears yoga pants. Over the past year or so, I now see them on men, who thankfully usually wear baggy shorts over them. If you look for me in the gym, I'm the old guy wearing the Adidas shorts with the three stripes on the side, and the "Motley Crue" concert Tee that has seen better days. Unbelievably, my style has to this point, failed to set off a trend, but I still hold out hope. It was cool in the 80's. I think. My wife bought me a baseball undershirt made by Lululemon Athletica (LULU) a ways back. I have told some of you that story. Such a great shirt. It takes an infantryman's level of discipline to dig up the "Quiet Riot" Tee when Motley is in the hamper.

Needless to say, this clothing style has spread way beyond the fitness crowd. These clothes show up at the mall, at the park, even in church. Note... I wear long pants and a collar to church. No Motley.

The 1976 Tampa Bay Buccaneers of the NFL, an expansion team back in the days before professional sports leagues realized that providing a path for new teams toward competitiveness might be a good thing, finished that year 0-14. The team lost their first 12 games in 1977, before ripping off two straight wins. At some point during that 26 game stretch, Coach John McKay (of USC fame) was asked what he thought about his team's execution that day. His response... "I'm in favor of it."

Lululemon Athletica has been executing well for some time now. On Wednesday evening, the firm reported their first quarter. The execution? Beats for both EPS and revenue generation on revenue growth of 20%. The firm guided their own full year guidance higher, but still below Wall Street consensus for both profitability and revenue. This is the biggie, I think. Comparable sales printed at growth of 16% (Brick and mortar comps +8%). Much will be made in the wake of these solid results of the firm's five year growth plan, and what CEO Calvin McDonald refers to as their "Whitespace" lab. The firm is aggressively seeking engagement in markets beyond their traditional domain, such as anti-odor shirts for men (What are you trying to say?), and expanded styles for woman, not to mention growing the accessories, digital, and international businesses.

Wall Street cheered these results with much praise. Among the many were Oppenheimer, Telsey, Canaccord Genuity, MKM Partners and Cowen. Phrases were thrown around like 'Improved earnings flowthrough", "enough drivers are in place to keep traffic strong", and "industry leading same store sales." What's an investor to do in this retail environment? Well, I think get some long side exposure is the easy answer. There are a lot of palookas who will tell you that. I'll try to tell you how. To the chart... 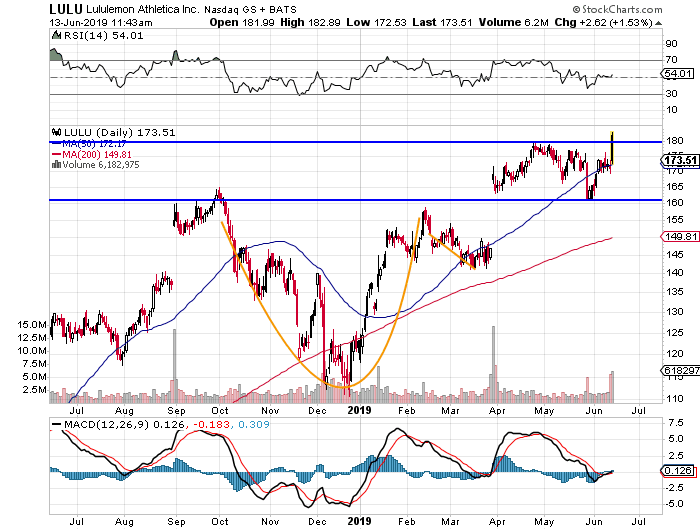 One's eyes are quickly drawn to the cup with handle pattern that provided the setup that led to that Q4 earnings related gap higher three months ago. At first it appears that the gap never filled, yet the lows of May do nearly kiss the peak of the right side of the cup. Not textbook, but I don't think the shares have to come in hard, at least not for that reason.

Now, in blue, a trader can see that the shares made an early attempt to break out from this basing pattern that failed higher than the highs of April. Perhaps that top will be our new pivot, or being that it was likely an algorithmic response to a news event, we leave the pivot between $179 and $180. Either way, if I can get long the shares, I think my target price would be in the area of $197, considering the depth of the base. I do have a model that shows a considerably higher target price, but I don't trust it enough yet to write about it for the public.

My gut is that there may still be a chance to grab some of these closer to $170 than the last sale of $174.