Perhaps the most complicated earnings release of the season hit the tape last night. An extraordinarily powerful corporation mired in the middle of an environment that might just, from a social and political perspective... be more complex than is the firm itself. Facebook (FB) reported the firm's fiscal third quarter results on Monday night. The firm posted GAAP EPS of $3.22, which beat Wall Street by a nickel, on revenue generation of $29.01 billion. The revenue number missed consensus view by more than half a billion bucks, but still was good enough for year over year growth of 35.1%.

Engagement metrics are of course, incredible, but also mixed relative to expectations. Monthly active users landed at $2.91 billion, just below consensus. Daily active users hit 1.93 billion, more or less in line with just consensus. Average Family service users (their family of apps, not yours) per day hit 2.81 billion, while Average Family service users per month hit 3.58 billion. Both of those numbers beat Wall Street, suggesting the family of apps is perhaps moving in a better direction than is the namesake social media service.

Perhaps more importantly, global Facebook average revenue per user (ARPU) printed at an even $10, which while nicely higher relative to 2020, was actually a contraction sequentially. Family (theirs, not yours) average revenue per person hit the tape at $8.18, also down from Q2 2021, but up from Q3 2020.

The firm now expects fourth quarter revenue to land in a range spanning from $31.5 billion to $34 billion, bringing the high end of the range down below Wall Street consensus of $34.8 billion. In prepared commentary, CFO David Wehner stated, "Our outlook reflects the significant uncertainty we face in the fourth quarter in light of continued headwinds from Apple's (AAPL) iOS 14 changes, and macroeconomic and COVID-related factors. In addition, we expect non-ads revenue to be down year over year in the fourth quarter as we lap the strong launch of Quest 2 during last year's holiday shopping season."

On the Metaverse, which is likely directly responsible for the upside guidance for the firm's spending plans, co-founder and CEO Mark Zuckerberg spoke during the call last night. He said, "This is a major area of investment for us, and an important part of our strategy going forward, and I view this work as critical to our mission because delivering a sense of presence, like you're right there with another person, that's the Holy Grail of online social experience. Over the next decade, these new platforms are going to start to unlock the kinds of experiences that I've wanted to build since before I even started Facebook."

Obviously, as former employee Frances Haugen has made the media rounds and testified before Congress, the firm has been painted with a poor look. Does Facebook do enough to ensure the safety of its user base? Have they prioritized safety by drawing the fringe elements of society toward the center as a means of driving emotion or outrage, and thus... engagement? Does Facebook always understand just how its own algorithms work? Why do the firm's own papers show such a poor success rate in addressing hate speech or violent content?

Has Facebook shown privilege in terms of enforcing its own rules when the content provider has been either a politician or a celebrity? All in all, while wildly successful, financially... this firm has always been questionably managed. This is a tough stock to own, at least for me, ethically. Therefore, I have never, since the name has existed... owned a share of Facebook. That does not mean that I don't play the name through earnings. 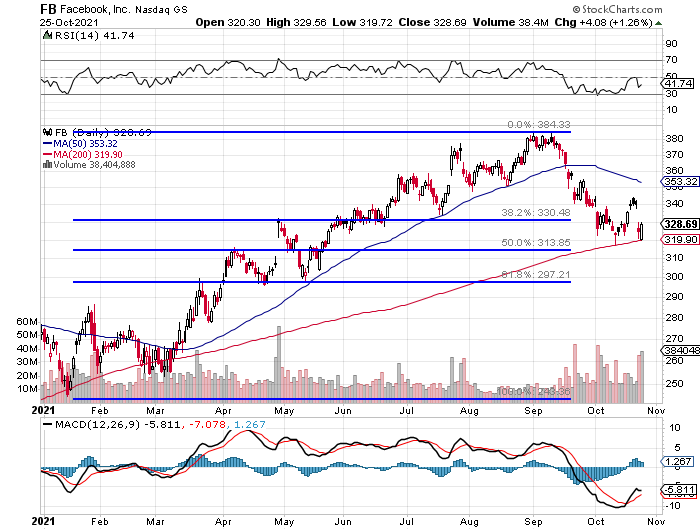 By early October, FB had retraced nearly 50% of the entire 2021 rally. The shares have been using the 200 day SMA, currently $319 as support and left a gap between $329 and $337 unfilled in recent days. My feeling coming in was that I wanted to make a mildly bearish play without shorting the equity, because that can be dangerous in this name.

What I did is get short a bull call spread, but only above that gap. Currently, I am short $340 FB calls expiring this Friday, and long $345 FB calls also expiring this Friday. You purchase the higher calls so that if you are wrong here, and have sold calls naked the equity, this way you don't get your face ripped off.

I put this whole spread on for a net debit of $1.17, meaning that for each contract I would make $117 should they all expire worthless. Should I keep this trade on my book through Friday and the shares go straight to the moon, I would have to sell FB at $340, and buy it back at $345. That possibility would cost me $500 per 100 shares, but only a net $383, because I have already realized that $117 per contract. Right now, with FB trading in the high $320's on Tuesday morning, I look alright, but Friday is a ways off, and FB is a volatile stock.

Get an email alert each time I write an article for Real Money. Click the "+Follow" next to my byline to this article.
TAGS: Earnings | Investing | Markets | Options | Stocks | Technical Analysis | Trading | Media