But That's The Chance

Not Only The Lonely

Either that, or loneliness is a broad issue. Match Group (MTCH) , the internet dating services provider, released the firm's second quarter financial performance on Tuesday evening. The firm reported EPS of $0.43, a beat of expectations, on revenue of $497.97 million. The revenue print, while also beating consensus, was good enough for year over year growth of 18.2%. You may recall that roughly a month ago I wrote on this name. My thought at the time was that if the shares took $75 they could go to $90. Then shares took that level a short while later, ultimately retreating. Now the shares threaten that $90 level without even slowing down at my former pivot.

What gives? Well for one, the firm has been innovative. As the planet has moved on to a more electronic existence in just about every facet of life, why should the social lives of those still involved in the dating scene be any different? I know that I usually regale you with some wild story from my experience that somehow fits the story. Sorry, gang. This time... I've got nothing. My wife and I were friends for a long time before our first date.

Whole lot of swiping going on. The strength is in the "very hot" Tinder segment. Average Tinder subscribers were up for the quarter to 5.2 million (+37%), beating expectations of 5.13 million. Operating margin did decline slightly to 35%. Don't forget that Tinder still has a free version, and launched for Android users in both Southeast Asia as well as South America recently. There are premium services that can be paid for that allow users to know if someone has seen their messages, and others that boost an individual's visibility on the app. Still, ARPU (Average Revenue Per User) only grew 2%, so user headcount remains key. EBITDA (earnings less interest, taxes, depreciation and amortization) increased 16%.

Bolstered by new products and exposure to these new markets, the firm raised guidance. The firm sees Q3 revenue landing in a range spanning from $535 million to $545 million, above industry consensus of $521 million. For the full year, the expectation for EBITDA would now be $770 million to $800 million, up $30 million on the low end, and up $10 million on the upper, based on average Tinder subscriber growth numbering roughly 1.6 million, up from a flat 1 million. 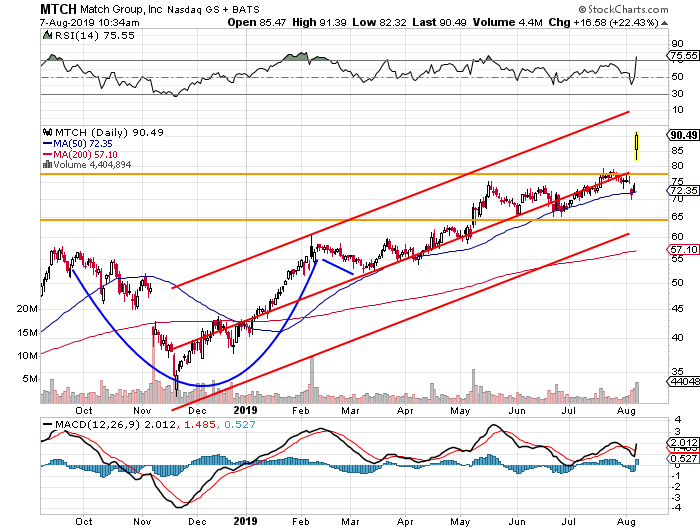 I know the chart is crowded, but there is a lot to discuss. I threw the Raff Regression model on the chart just to define trend. It comes off of the the cup with handle that provoked the move to the $75ish level that I discussed last month. The real support all year has come from the 50 day SMA. I will tell you this. As nice as this chart is, and as well as this corporation is executing, $90 would have been my target price. I would rather sell it here than by it as I see the probability that the gap created to the upside today (Wednesday) ultimately fills. My thought is that an interested buyer gets a chance in the low to mid $80's.

Note: The sale of the put creates a net basis of $94.53 by adding the premium realized to the cash receipt. Should the gap fill, landing the shares below $85 by September 20th (monthly expiration), the trader is left with no position and a profit of $9.53, or $953.

Note: The premium gained from the sale of this put is simply found money should the shares not sell off over the next six weeks. Should they sell off hard, the trader would stand with a long position of 100 shares at a net basis of $81.65, which is where I would be comfortable adding this name.

Get an email alert each time I write an article for Real Money. Click the "+Follow" next to my byline to this article.
TAGS: Earnings | Investing | Options | Stocks | Technical Analysis | Trading | Consumer Services

We saw no panic, but we did see steady selling all day. Here's what matters going forward.

It might be like cold water in the face to think that earnings don't matter. But these stocks have detached themselves from all metrics.

Look for AT&T to Decline Further Despite an Attractive Yield

Both, actually. But the one who came out way ahead might surprise you.