We already knew that the preliminary data released last week for the Phase 3 trials for Covid vaccine candidate BNT162b1 by Pfizer (PFE) and BioNTech (BNTX) were impressive. Very impressive in terms of both safety and efficacy. We knew that Moderna (MRNA) would soon release interim data for their closest candidate, mRNA-1273, and hopes were high, as both Pfizer an Moderna had made use of messenger RNA technology, an experimental method for creating an immune response to a viral infection that could, if it worked, cut years off of the length of the current public health crisis.

I had hit send. Market Recon was already in editing. The Moderna news broke. My oldest Covid-related position. Stunningly effective at 94.5%. As far as we can tell rather safe too. Even more impressive that an efficacy rate that had been thought improbable just a few weeks ago, are the logistical concerns. While Pfizer's candidate must be stored at -94 degrees Fahrenheit, making widespread use of the military necessary as deep freeze capabilities just are not that common in the real worlds of medicine or food distribution networking.

Well, Moderna's candidate is far more user friendly from a logistics perspective. mRNA remains stable in range spanning 36 degrees F to 46 degrees F for 30 days, which is standard for a home refrigerator. In fact, mRNA remains stable for 12 hours at room temperature which will be huge at points of distribution. For long-term storage, mRNA does need to be kept at -4 degrees F. This vaccine does not require onsite dilution or special handling.

You are going to have to wear your mask and socially distance through the holidays. Moderna expects to apply for Emergency Use Authorization from the FDA within weeks. Unfortunately there is not a lot of this vaccine ready to go. The firm says that they could deliver 20 million doses to the United States prior to year's end. Keep in mind that this vaccine is provided in two doses, 28 days apart, so that's 10 million people. Best case, should these two candidates (PFE & MRNA) both receive EMU authorization in short order, then 30 million Americans could be immunized this year. Moderna expects to produce between 500 million and 1 billion doses globally in 2021. The firm also has distribution deals with nations in Europe and the Middle East.

As for the Phase 3 study, Moderna had enrolled 30K healthy adult patients in their trials, 15K of whom were given the vaccine and 15K a placebo. Ninety-five individuals contracted a confirmed infection of SARS-Cov-2, 90 from the placebo group, and five from the vaccine group. There were 11 cases of severe Covid-19, all of whom came from the placebo group. The vaccine was considered to be generally safe, and well tolerated. Side effects did include pain at the injection site, and upon the "booster" dose, headaches, muscle pain, and fatigue.

As people, we have to respect this awful virus. It's still out there, and it's still terrible. My next door neighbor had it, and did not even feel sick. I had it and it is easily the worst illness that I have ever gone through. Nothing else even comes close. So wear your mask, and stay as far away from people outside of your household as possible.

As for the stock, everyone knows I am long Moderna (MRNA)  and have been since the beginning of the pandemic. I am at a full position, having been overweight but having taken some off back during the summer spike. This morning, as the bell was about to ring, I was up 238% in this name. Of course I have to take some off. That's how trading works. Does not mean that the shares can not go higher. 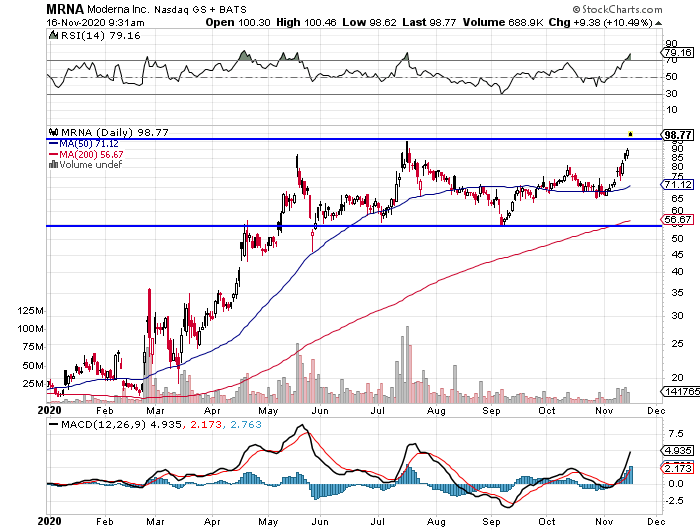 What had looked like a cup with handle that ran summer into fall, now looks more like a period of consolidation type basing pattern running from the May spike into the present. This makes the $95 spot the pivot, where I had previously thought $80 to be the pivot.

With this morning's opening above my target price of $96, I am forced by my own code of discipline to take 20% of my long off and bank it. My new target price for the balance of this long position is now $114.

Get an email alert each time I write an article for Real Money. Click the "+Follow" next to my byline to this article.
TAGS: Drug Approvals | Investing | Markets | Stocks | Technical Analysis | Trading | Biotechnology | Pharmaceuticals | Coronavirus