Just another? Truth be told, it's been a while since we've seen this kind of action prior to hearing that wonderful bell at 11 Wall Street. First there was the United Technologies (UTX) /Raytheon (RTN) "merger of equals." By the way, as Raytheon shares trade below $190 post 9:30, I am no longer as eager to sell these shares as when I discussed this merger pre-opening. The shares were trading at $202 overnight. In the high $180's, I now return to spectator status with a partial position in place. Shutterfly (SFLY) is trading higher this morning as Reuters reports that Apollo Global Management might be closing in on a deal that could be announced later this week. Then there was news that Merck (MRK) would pay $773 million for Tilos Therapeutics, a privately held biotech. Oh, one more thing. I wrote about Saleforce.com  (CRM) last week. That epic saga continues.

If you follow everything I write extremely closely, then you might recall that I started selling my long position in Salesforce once my panic point of $154 had been breached to the downside. As the shares slid into the $140's ahead of earnings, it was easy to get arrogant. Then it happened. Earnings? Beat. Revenue? Beat. Operating Cash Flow? Higher. Guidance? Oh, that was higher too. The shares moved higher. Rapidly. The arrogant trader now felt the fool. Still waiting for a chance to repurchase shares sold lower.

Monday morning. News !! Salesforce acquires Tableau (DATA) in a $15.7 billion all-stock deal. Boom. A chance to buy back shares sold at $154 in the $153's. No need to wait for the opening bell on thus one. Take 'em. Congrats to shareholders of DATA. Those shares are up 35% this morning. Each share of either Class A or B shares of DATA will be exchanged for 1.103 shares of CRM.

This is where it gets interesting for Salesforce shareholders. The deal should close sometime in the firm's fiscal Q3 2020, which ends on October 31st, 2019, for people with normal calendars. Tableau will keep the operation headquartered in Seattle, where it is now, and will continue to operate under it's own brand. In fact, DATA CEO Adam Selipsky and his team will stay on board. The firm now expects, with the addition of Tableau to add between $350 million and $400 million in revenue for the fiscal year. That's the good.

Why I Am Adding Here

Already long about a starter position in the low $153's now, I watch for a chance to add more on a greater discount. Why? I'll tell you why. As someone who wanted to buy the shares back in the first place, this appears to be a lucky break. The EPS smack-down is the result of both dilution (this is an all-stock deal, after all), and the price paid for Tableau. That said, Salesforce has made a habit of growing the firm through strategic addition. I see this as no different. Salesforce looks to integrate the business intelligence abilities of Tableau with Salesforce Einstein to create what the firm expects to become the most intelligent and intuitive analytics and visualization platform for every department and every use at any company. At least that's what the press release says. I see no reason to start doubting Marc Benioff now. 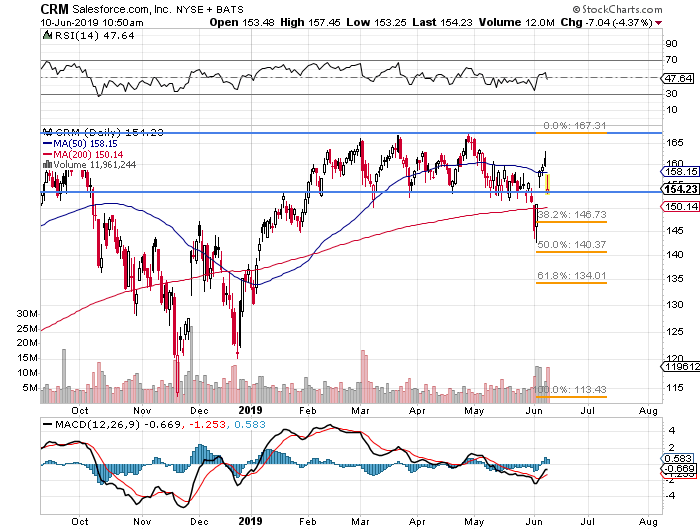 This is the same chart I gave you last week, updated for recent sales. The point here, I think, is that the lower bound of the flat base appears to have held once gain. The pivot, or catalyst to push higher gains would be a take and hold of the $167 level, now fairly far off.

Now, that I have some equity in inventory at my price, I can implement what I spoke of last week in the interview with Katherine Ross at TheStreet.

Notes: This reduces the net basis on the equity to $142.58, or the approximate level of the pre-earnings low of the selloff. There is obvious increased equity risk below $140 through September. Profit on this trade through September is also capped at 15.7%.

Get an email alert each time I write an article for Real Money. Click the "+Follow" next to my byline to this article.
TAGS: Mergers and Acquisitions | Investing | Options | Stocks | Technical Analysis | Trading | Software & Services | Technology