Working remotely...775%. That was the number. Stopped me in my tracks. Microsoft (MSFT) announced that there has been a 775% increase in demand for cloud services in regions currently with orders that are currently in effect to either shelter in place or to socially distance from one another. Along those lines, the firm announced nearly 10 days ago that Microsoft Teams, which is a competitor to both Slack (WORK) and Zoom Video (ZM) , had passed 44 million daily users, up from just 20 million back in November. The firm also announced that usage for Windows Virtual desktop had grown threefold.

In fact, usage has ramped up so dramatically and so quickly that Microsoft has had to temporarily restrict certain features across platforms, including placing limits of free or trail offers, and video resolution in order to avoid disruption to services.

In addition, one could surmise that demand is simultaneously building for the firm's software licensing business such as Office 360 and Microsoft Dynamics, which is a line of client management applications. This type of business is key as it represents recurring revenue, which has become the most important kind of revenue, even before this pandemic. This also allows a firm to better shape forecasts in what is now an unpredictable time.

As one might expect, gaming has been hot in this environment as well. The firm's Xbox division has been reported as requesting that developers release updates to games during off-peak hours in order to limit strain. Microsoft is planning to take steps to increase the firm's cloud capacity, according to the Financial Times.

Several months ago, investment focus was on being environmentally responsible, and Microsoft was a champion in that environment after CEO Satya Nadella had expressed his interest in not just being carbon neutral, but in the firm achieving a net negative carbon footprint for its entire existence (since 1975) by the year 2030. Not that this is no longer important, but it does reveal just how in tune the firm has been since Nadella has been at the wheel, and focusing on the cloud ahead of the curve though leadership in the hybrid cloud is representative of that theme.

Azure remains a top choice for business as the cloud, once viewed as a "growth" industry, has accelerated through forced evolution into what it is now... a business staple. This is why, I also consider Amazon (AMZN) to be a key holding, having nothing to do with that firm's e-commerce retailer. For me, Microsoft is a long-time holding, first as a software play, then as a key member of my "cloud" group, and now as part of my "work remotely" group that also includes the likes of Adobe (ADBE) , Salesforce (CRM) , and ServiceNow (NOW) .

Can one completely mitigate downward risk in a long portfolio through proper allocation meant to take advantage of the new normal? Of course not. Not in the era of passive investment anyway. That said, the goal is that one is open to the idea of exposure to beat the market. Beat the market regularly, and at least the majority of the time, the P/L takes care of itself. No guarantees, but through sentient navigation of the marketplace, one can improve their chances, and if this game is not one of probabilities, I do not know what is. 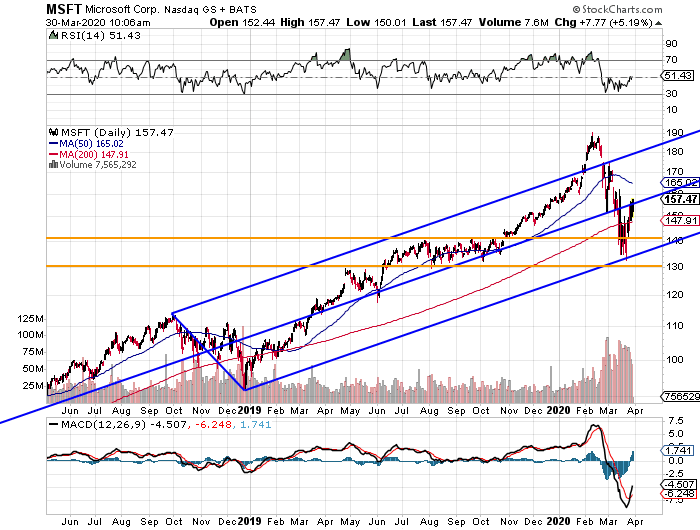 Remember this chart? Probably not, unless you follow me real closely. I drew this one up for you back in January before the name popped just after earnings. What I find so remarkable here is just how well the algorithms have played within the lines of the Pitchfork. I've got to say how it really does surprise me that a lot traders no longer use these Pitchforks, because they really, at least at times, seem to be recognized by these high speed algos.

Anyway, the shares do seem to have at least paid respect to the lower trend line at market lows, and also at the central trend line for both short-term support and resistance. Even with a $60 range over six weeks, I can honestly say that this name has not broken at any point over that time, technically. My $200 price target for Microsoft remains unchanged at this time. I had originally placed a panic point of $156 on these shares that I had ignored as I rearranged my entire book once the the broad market selloff had become recognizable, at least to me. At this time my preference would be to add at the 200 day line, given a second chance, with a new panic point of $135, which would have to be enforced, as retest of the lows would be a very negative sign.

(Microsoft, Amazon and Salesforce are holdings in Jim Cramer's Action Alerts PLUS member club. Want to be alerted before Jim Cramer buys or sells these stocks? Learn more now.)

Get an email alert each time I write an article for Real Money. Click the "+Follow" next to my byline to this article.
TAGS: Investing | Markets | Stocks | Technical Analysis | Trading | Software & Services | Technology | Technology Hardware & Equipment | Video Games