I have often found Micron (MU) to be one of the tougher names to get right going into earnings. By the time these earnings had rolled around, I had been out of the name for a long time. I had long since narrowed my book, leaving just Nvidia (NVDA) , Advanced Micro Devices (AMD) and Marvell Technology (MRVL) as more focused investments across an industry that had once been a broad collection of shallower holdings. Maybe I should have left something in memory. For those thinking like that, Western Digital (WDC) will report on July 30th.

For the firm's fiscal third quarter, Micron posted adjusted EPS of $0.82, on revenue of $5.44 billion. Both lines beat expectations, and the revenue reported was good enough for year over year growth of 13.6%. Yes, the earnings number was a decline in annual terms (a sixth such quarter in a row), but the sales number returned to growth after five successive quarters in decline. Overall, Q3 adjusted gross margin landed at 33.2%, which may have been toward the lower half of guidance, but did beat Wall Street consensus.

The demand, even for memory, is currently being driven by the cloud and by gaming, just as we have seen being reported by other types of chips makers that focus more on the "brains" of the data center, or the graphics of gaming. This demand for what folks need to work from, or seek entertainment from home, has only increased during the era of Covid.

Cloud integration and migration to the cloud remains a main business theme going into 2020 and beyond. This is the driving force behind capital expenditure on the data center. Especially with many businesses now reliant upon a labor force that must work remotely. On Monday evening, Micron acknowledged the fact that this is now the firm's most significant driver of growth.

Even should this impact start to wane as certain businesses might slow down on capex as their short to medium term futures (perhaps based upon geography) become questionable, there should be some kind of tailwind created demand for both DRAM and NAND products as the nation makes an attempt to keep up with competitor nations in 5G technology. This in turn will drive smartphone turnover. That also means inventory building for chip makers. In addition, both Sony (SNE) and Microsoft (MSFT) are expected to release next generation gaming consoles for this holiday season. If many folks are still on the couch at that time, think these will sell?

Optimism? You could say that. For the current quarter, Micron expects to earn $0.95 to $1.15 per share on revenue of $5.75 billion to $6.25 billion. These numbers are well above the $0.80 on $5.5 billion that Wall Street in general seems to be looking for. This is what is being priced in this morning as the shares have gapped higher overnight. The firm is also looking for gross margin to rise into a range spanning 34% to 37%, and operating expenses to drop to $625 million to $675 million from $875 million for Q3. 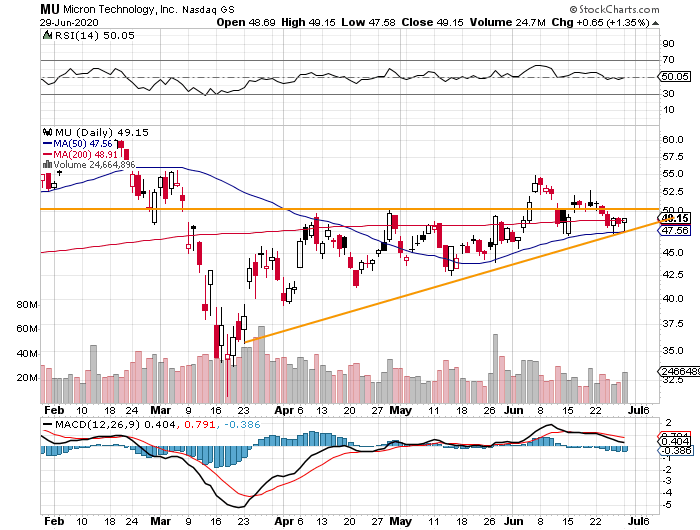 This morning, MU will make a second attempt to break out of a nearly perfect ascending triangle pattern with a $50 pivot. Expect the moon? No. Expect $60? Oh, I think so. Just understand for those long the name, that this day is different and capital flows this afternoon will be vastly different from what you may see for the rest of the week. If you missed this move, WDC offers a second swing at a similar pitch. If you are already long MU and believe in it, I would try to not get shaken out based on Tuesday afternoon's markets. If I see this name come slow to that pivot, I may just grab a few myself. Like I said.. this thing can go to $60.

(Nvidia, Marvell Technology, and Microsoft are holdings in Jim Cramer's Action Alerts PLUS member club. Want to be alerted before Jim Cramer buys or sells these stocks? Learn more now.)