A decent or even better than decent quarter it was for Marvell Technology (MRVL) . For the firm's fiscal second quarter, the firm posted an adjusted EPS of $0.21, which beat the street by a penny. Revenues landed at $727.29 million. That number also beat expectations, while being good enough for year over year growth of 10.8%. That rate of growth by the way, was the firm's best since Q4 2018. The firm also outpaced consensus opinion for margin. Adjusted gross margin of 63.3%, and adjusted operating margin of 22.4% both surprised to the upside.

I don't know about everyone else, but I was mildly surprised by how sales were divided up for the quarter. Storage, which can be something of an industry in decline, especially for those firms still at least somewhat reliant upon HDD, and /or Flash, actually did well. That business line posted sales of $290 million, or just less than 40% of the entire pie. While growth of 5% sounds moderate, I was actually bracing myself for less.

Now, if you're in Marvell, you are here for the opportunity in 5G technology. You're not here for Storage. You can do Micron (MU) for a storage based approach, or Western Digital (WDC) for more focus on Flash. If you think the hard drive is set up for a return to the future, then you like Seagate Technology (STX) . However, if 5G is where you think you should be, the call has been MRVL, or maybe Qualcomm (QCOM) .

Networking, which is where in this firm's data we'll find 5G, put a cool $405 million in sales to the tape, growth of 23%, and nearly 57% of that already mentioned entire pie. Oh, I know this may seem out of place, but has anyone seen anything in the way of Strawberry Rhubarb pie of late? I know I have not. Random thought, never mind. I have a couple of "maybe" type problems with this performance in Networking. Yes, the number did beat consensus, but not by as much as I was hoping.

In addition, while the company sees growth in this unit, the driver of growth for the firm in 5G technology has come from inside China. That's a wildcard, or possibly a hot potato going into the election in my opinion. I believe this is why the firm's guidance is less than outstanding.

Moving right along, for the third quarter they now expect to see revenue land at roughly $750 million, which would be slightly below where Wall Street is for the firm. The firm looks for adjusted EPS of $0.22 to $0.28, which ballparks the $0.25 that the industry expects. However, the firm is also below the street on Q3 adjusted gross margin which was a strength for the Q2. Is my spider sense tingling? A little. 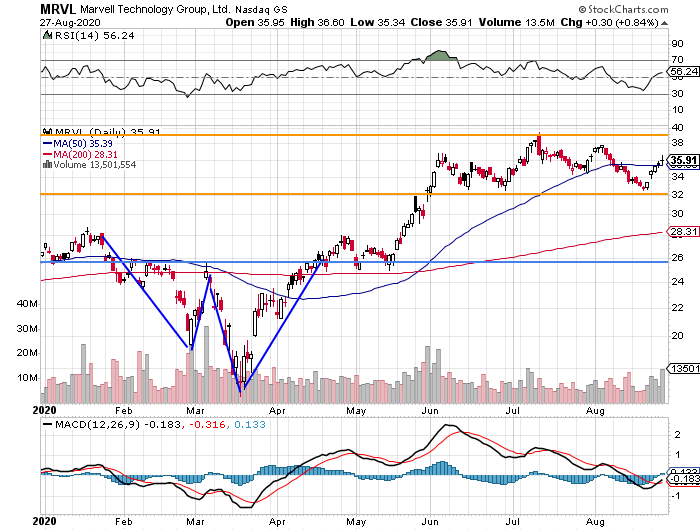 My thinking is that these shares are clearly extended from the mid-May breakout and have formed a basing pattern at the top of the chart that has been in place since early June. I think I make a sale on the Friday pop. Truth is I am up 41% on the name, and my target was 25%, so very likely I take the entire position off my screen and pad my cash position which has dwindled this summer.

Get an email alert each time I write an article for Real Money. Click the "+Follow" next to my byline to this article.
TAGS: Earnings | Investing | Stocks | Technical Analysis | Trading | Technology | Telecommunications

Wingstop May Need More Napkins Before It Bottoms

The shares peaked in September and have suffered a painful decline.