Let me begin by stating that I maintain a long position in Apple (AAPL) . Let me add that this position is about one-third the size it was little more than a week ago. The catalyst for this reduction in size was not the firm's performance, not the undeniably increased headwinds the firm faces as the trade war between the U.S. and China expands. Simply put, the shares failed at the highly significant technical level of $215 in mid to late August. I still believe in the name. I still like where CEO Tim Cook thinks he is taking the firm. Jim Cramer often states that home-gamers should probably own AAPL, and not trade it. I consider myself both a trader as well as an investor, hence, I am guilty of trading this name while maintaining a core position. I will add the shares back that were recently sold. I must figure out the where and the when. This is my story.

Back Up a Little

Let's go back to July 30th. Apple reports the firm's fiscal third quarter performance that day. Apple beat expectations for both earnings and revenue. The firm increased their own Q4 guidance for revenue above consensus, while pushing mid-point guidance for gross margin above the street as well. Reasons for optimism? How about the fact that the firm's much hyped services businesses are growing like weeds in the garden in late summer. Apple Care. Apple Music. Cloud Services. The App Store. Advertising. 420 million paid subscriptions. How about China? Clearly no boycott in sight. The region provided $9.2 billion in revenue. Wearables? 50% growth for the Apple Watch, for AirPods.

Even with the iPhone, which under-performed slightly, Apple still offers what consumers want, and has an immense, nearly captive client base to which these wares can be marketed. Some talk has been made in the marketplace recently over the firm's expense of $6 billion toward putting together the new streaming service that will compete with Amazon (AMZN) Prime, Netflix (NFLX) , as well as Disney (DIS) Plus and Hulu (also a Disney product). To keep that in perspective, the firm ended the quarter with a net cash position of more than $102 billion, and continues to aggressively return capital to shareholders.

The new tariffs implemented by the Trump administration this past weekend are more consumer focused than were previous tranches already in force. Of the roughly $110 billion in goods now being taxed, a ballpark $52 billion or so will be placed upon consumer electronics such as televisions, cameras, earphones, smartwatches, and the like. This is where Apple faces some margin pressure, as the already mentioned AirPods and Apple Watches are a high growth area for the firm.

As for the iPhone, this is a more complex story. President Trump has pushed a number of proposed tariffs out to December 15th. Smartphones are on that list. The president has expressed an understanding that Apple needs to compete with Samsung (SSNLF) in this arena. The president has also expressed an interest in firm's with large supply chains highly exposed to China, to move those supply lines elsewhere, hopefully to the U.S. Even with the expected margin pressures now and in three months, the firm will benefit from lower memory prices (DRAM, NAND) for their mobile devices. The bottom line? Longbow analyst Shawn Harrison estimates this morning that the September 1 tariffs could have an annual negative impact on EPS in the range of $0.19 to $0.20 if there is no price increase made on the consumer side to offset.

Bear in mind that while Apple does run assembly areas in the U.S., Brazil and India, the firm remains highly exposed to China in this regard.

September 10th. One week away, Apple plans to reveal the next iteration for the firm's prominent smartphone series. This is where the Pro and Pro Max versions will launch. Do you need an iPhone? I'm still nursing an iPhone so old, I don't even know what number it is, or how long I have had this phone. It still works, but I'm due. I bet a lot of you are due as well. I also know I am not switching away from Apple when I do bite. Upgrade? Yeah, I have one (or more) of those at the ready. An estimated 60 million plus Chinese consumers are also in this position. Their brand loyalty could be an issue. So far, that demand seems to have stabilized. 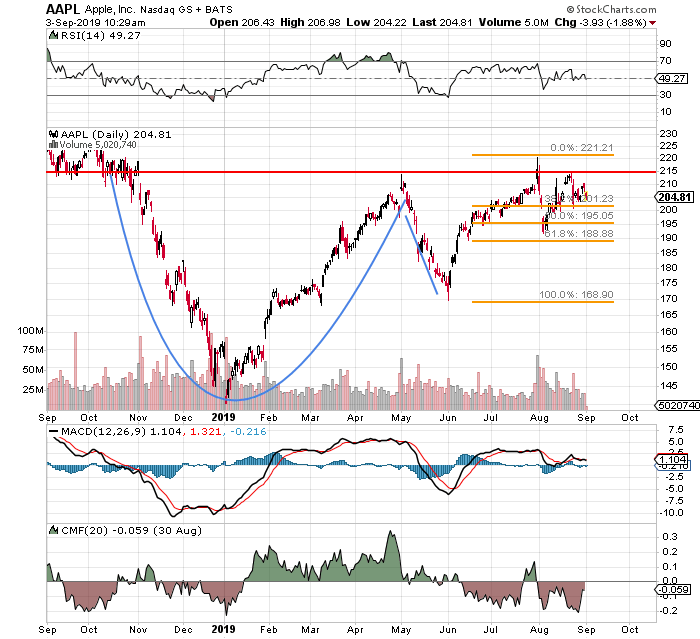 Here, one can clearly see why failure at $215 was so important from a technical perspective. My panic point for the name is currently $188. That level, a 61.8% retracement off the post-earnings high through the early August low, absolutely needs to be held. It did hold a month ago. I think perhaps I add at $201, and then bring the position back up to full strength close to $195.

That's just a plan. Everyone has a plan until the punches fly. In the meantime a trader could (in minimal lots)...

Note: In this example, the trader takes home $270 in exchange for allowing increased equity risk at the $200 and $195 levels, while increasing the flexibility to add exposure should the shares appreciate from here on the iPhone announcement.

Get an email alert each time I write an article for Real Money. Click the "+Follow" next to my byline to this article.
TAGS: Investing | Markets | Options | Stocks | Technical Analysis | Trading | Software & Services | Technology Hardware & Equipment | China | Stock of the Day