No way to sugarcoat this. You, the readers, have been for the most part, very kind and very forgiving. I get a lot of feedback on a weekly and sometimes even daily basis. Very rarely do I see anything negative and I thank you for that. In my opinion, I find a kindness in both that many of you seem to really appreciate my winners and at the same time, also seem to let my clunkers go without comment. My "Id" likes to think that perhaps these less than glorious trade ideas have gone unnoticed. My "ego" however, knows better, and my "super-ego", given the news of the morning demands that I bring one of these to light myself.

Some will recall that I have been long the shares of Merck (MRK) for a while now. I wrote to you back in September. Merck had just started dosing human subjects with their "old-fashioned" Covid vaccine candidate, and the firm had also just put together a deal with Seattle Genetics (SGEN) where the two firms would work together in the fight against cancer, with Merck, in the end, winding up with an equity stake in SGEN.

I was optimistic. I gave you a pivot of $85, target price of $103, and a panic point of $77. Well, Merck reported this morning, the CEO is stepping down, and the shares have been trading with a $76 or $77 handle all week. So, without further eloquence, let us explore the name.

Less than two weeks ago, Merck discontinued development of the firm's two Covid-19 vaccine candidates due to what were apparently immune responses in subjects that were inferior to what patients suffering actual infection of the SARS-CoV-2 virus experienced. The firm would continue to work toward the development and production of two therapeutic candidates that were still being worked on.

Five days later, Merck announced that the use of star cancer fighting therapeutic Keytruda in combination with ipilimumab failed to improve overall survival than the use of Keytruda alone for patients suffering metastatic non-small cell lung cancer.

Four days after that, Reuters broke news that Merck's treatment for baldness, Propecia or its generic versions had been linked to more than 700 reports of either suicide or suicidal behavior (including more than 100 deaths) since 2011. Not a good couple of weeks, not in the least. We're not done.

For the fourth quarter, Merck reported adjusted EPS of $1.32, missing Wall Street's consensus by seven cents. Using GAAP standards, the firm posted EPS of $-0.83, missing very badly. The adjustment (for both the quarter and full year) reflects a $2.7 billion charge for the acquisition of VelosBio as well as a $1.6 billion pre-tax impairment charge related to ZERBAXA resulting from a December 2020 recall. As for revenue generation, Merck put a $12.51 billion print to the tape. That was good enough for year over year growth of 5.4%, just not good enough to beat the street. Yes, another miss.

With earnings came news that Chairman and CEO Kenneth C. Frazier will retire effective June 30th as CEO and remain on as Executive Chair. The role of chief executive will be filled by Robert M. Davis who has been with the firm since 2014 and is currently serving as CFO, and executive vice president, global services. Davis is a veteran of both Baxter (BAX) , and Eli Lilly (LLY) . Though the firm has been stumbling around a bit of late, Wall Street has always had a lot of confidence in Frazier, and in my opinion... he has always been one of those guys that when he spoke, you shut your pie hole and listened. His announced departure from day to day leadership might be taken poorly.

There Was Good News

Sales of Keytruda contributed $3.993 billion toward quarterly revenue. This number represents 28% growth, and almost 32% of the whole. No other single drug comes close in terms of dollar amounts. Januvia (for Type 2 diabetes) posted sales of $1.328 billion, but that number was a 6% contraction from Q4 2019. Gardasil (human papillomavirus) sales are growing rapidly (+44%), and could soon be one of the firm's more successful sellers. For the quarter, Gardasil contributed $998 million in sales.

Forward looking guidance, supported by these drugs, is really rather optimistic. Full year 2021 revenue is expected to land in a range spanning from $51.8 billion to $53.8 billion. Wall Street had been around $51.7 billion, so this is indeed solid. The firm sees FY 2021 adjusted EPS in between $6.48 and $6.68, which is well above the $6.30 or so that the sell-side was looking for. So, do you believe them? I think I do, but I thought I was right last September when the shares were bouncing around in the low to mid $80's. 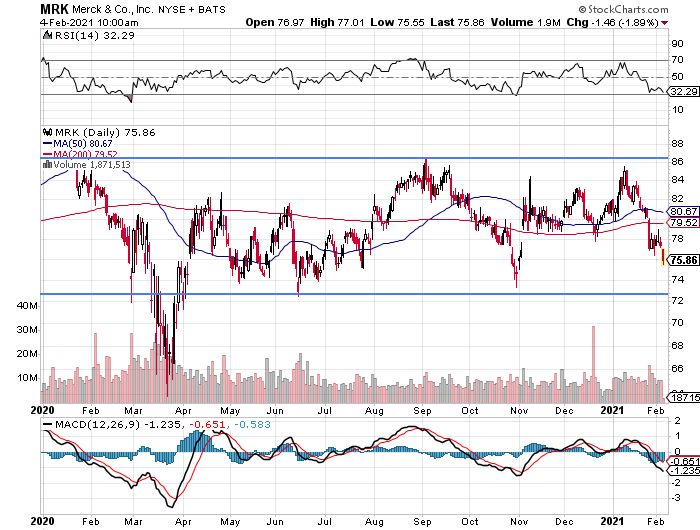 The shares have largely traded sideways since the market reckoning back in March of 2020. We see now (I did not see it in September) a lengthy base that has tested the $73 level as support twice before, and could be headed for another test as we speak (write/read). MRK did peak at $87 as August turned into September, but any attempts to rally the shares have been put to bed at $85 since then, which was our pivot.

First off, my net basis in this name is $80.39, so as I write I am down 5.15%. This is my fifth worst performing position in a book that contains 62 open positions. So, how do I fix this? Five percent ain't so bad you say? To that I say two things. One... remember our 8% rule. Two... personal tolerance for suboptimal performance breeds imperfection as habit. Now, I am not some kind of a lunatic. I understand that I can not be perfect. The imperfect result is understandable. Acceptance of imperfection is not. This is how I am going to try to fix this... using minimal lots in the example.

Notes: At this point, net basis is down in between $70 and $71, with the last sale around $76 and established support close to $73. In order to "fix" this problem position, the trader has limited his or her upside to making a sale on the whole position at $80, or doubling equity risk below $72.50 about three weeks after Kenneth Frazier leaves his post. In the meantime, Merck is paying shareholders $0.65 a quarter (3.36% yield) which I did not even factor into this model or into my -5% performance.

Get an email alert each time I write an article for Real Money. Click the "+Follow" next to my byline to this article.
TAGS: Earnings | Investing | Markets | Stocks | Technical Analysis | Trading | Pharmaceuticals