By now, it's no secret to anyone that JPMorgan Chase  (JPM) reported the firm's second quarter financial results. The firm posted GAAP earnings of $2.82 per share on revenue of $29.57 billion, good enough for year over year growth of 4.2%. JPMorgan joined other banking heavyweights such as Citigroup (C) , Wells Fargo (WFC) , and Goldman Sachs (GS) in exceeding expectations at least at the headline level.

Of course with a large, complex money center bank, there is much to take in. These results are no different. There's some good, but unfortunately there is also some not so good. For one, the firm recognized a one-time income tax benefit that padded results to the tune of $768 million, or in the end, added 23 cents to EPS. Still the beat there was a very solid 33 cents, so it's not like the firm relied on this to post quarterly profit growth.

While, many different items matter, the first two I always look at, are tangible book value per share, and NIM, or net interest margin. Why those two more than performed across the bank's individual business lines? Easy... the first, tangible book value (book value less goodwill and other non-tangible assets) is kind of like a final grade on a report card (and is why I went into it, and remain long Citigroup). For JPMorgan, this metric printed at $59.42, up from $55.14 from the same quarter last year. At a last sale close to $115, the shares trade at 1.94 times tangible book. For comparison, Citi  printed TBVPS at $67.64 on Monday. At a last sale of $71.50, Citigroup trades at just 1.06 times tangible book, meaning to me, that at the last sale, the investor might be "mentally stopped" down just 5%. Goldman Sachs also trades at 1.06 times tangible book, making both C and GS far cheaper than JPM when valuation is measured in this way. Wells Fargo currently runs at 1.36 times tangible book. 1.94 times sure is a lot to pay for "best of breed" status.

Now, net interest margin is more important to the bank than just the traditional means by which lenders make money. It is how the banks themselves are at least in theory valued as a group by investors. At the extremely skinny net interest margins that we have seen ever since easier monetary policy became a by-product of the great financial crisis, the banks have regularly been among the equity markets most undervalued industry groups in terms of forward looking earnings.

The Guts of Banking

We can focus on double digit growth in credit card sales. We can point to growth in mortgage borrowing and auto loans. We can choose to return on tangible common equity overall, which remains strong. As a potential investor, the firm announced an increase in the quarterly dividend from $0.80 to $0.90, as well as the capacity to repurchase up $29.4 billion worth of equity over the next four quarters. That's hard not to like.

There are a couple of real head scratchers here, though. For one, fixed income trading produced a decent quarter, but equity trading was just pitiful, posting a 12% decline with revenue of just $1.73 billion. We saw weakness on this line on Monday from Citigroup, by the way. I do understand that equity markets spent the month of May circling the drain, but June was fantastic. This has not been, or should not really have been that tough a market for equity traders.

In addition, Investment Banking has been weak, reflecting a weaker environment for that fee driven business. The most important takeaway from a negative perspective, and don't get me wrong, this performance over all is honestly quite solid, would be the firm's reduction in it's forecast for full year 2019 net interest income, to $57.5 million from $58 million from their last guidance three months ago. Remember, in producing that guidance JPMorgan factored in three rate cuts by the FOMC, which in my opinion, might be getting a little ahead of themselves. That said, with Fed Funds Futures markets in Chicago pricing in just that, I can see why that potential credit environment was used to develop the model. 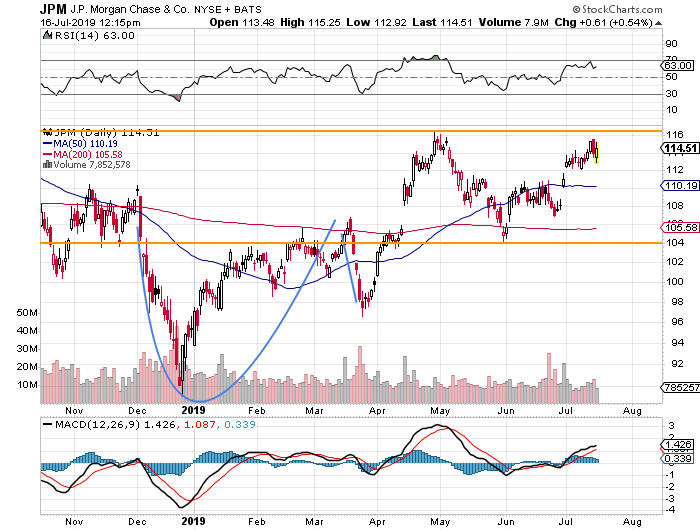 What I see here is a stock that broke out of a cup with handle (blue) pattern, and the base. The basing pattern that is now evident and ranges from the $104 to $117, with $117 being the next pivot. I have no equity position in the name, but I did come into earnings long September $115 calls that are now worth about 40 cents ($40) more than I paid for them. While cashing those in and treating the family to lunch at Subway is an idea, I thing I'll roll the dice on these calls given I have time on my side, and not much capital at risk.

As for the equity, I would not mind owning a few shares of JPM, but I need the 50 day SMA, or what is now the $110 level, then we would take a look at either the 200 day line, or the lower bound of our Flat Base, being that they currently reside in the same neighborhood. The JPM take and hold of the $117 level, the shares could go considerably higher technically. That said, I don't think that the fundamental backdrop for the macro-economic environment is conducive to a target price up around $140, which would be possible in a parallel dimension with higher interest rates that more highly valued money center banking. You see this stock take $117, I would be more than happy with $125. January $110 puts are currently paying $4.50. There is that, if you have six months.

Get an email alert each time I write an article for Real Money. Click the "+Follow" next to my byline to this article.
TAGS: Earnings | Investing | Options | Stocks | Technical Analysis | Trading | Banking | Financial Services | Stock of the Day