FuboTV (FUBO) reported the firm's third quarter financial results on Tuesday evening. Some of the numbers are truly impressive. Other numbers that speak directly to profitability? Not so much. Let's explore. For the reporting period, FuboTV posted an adjusted loss of $0.59 per share, and a GAAP loss of $0.74 per share. Both of these metrics for bottom line performance missed their Wall Street provided marks. Revenue generated over the three months totaled $156.69M. That was a nice beat, and good for year over year growth of 156% as well.

Beneath those headline level numbers, subscription revenue ramped 158% to $138.1M, while advertising revenue popped 147% to $18.6M. Total subscriptions increased 108% year over year, and a very impressive 39% quarter over quarter. Those who actually read the letter to shareholders learned that since closing the quarter, subscriptions surpassed the one million mark. This event should, if sustained, and there is no reason to believe it would reverse, increases leverage and influence with content partners and sports leagues, not to mention advertisers.

Speaking of subscribers, at quarter's end, FUBO boasted 944,605 total paid subs, +108%. Content hours streamed increased 113% to 284M. Average revenue per user (ARPU) per month increased 10% to $74.54, while advertising ARPU per month also increased 10% to $8.23. I think it is clear to see that adoption is strong, and once on board, the connection is also strong. The firm needs advertising revenue to catch up to subscription revs, or at least close the gap somewhat if it is to reverse EBITDA of $-81.3M. Operating expenses and net losses are down year over year, but still too heavy.

Many folks may not know that Fubo Sportsbook was successfully launched on November 3rd as the firm attempts to turn passive viewers into active participants through real-money wagering as well as free to play gaming. On that note, the firm has recently announced strategic partnerships with the New York Jets of the NFL, the Cleveland Cavaliers of the NBA, and NASCAR. The firm has also recently (since the quarter) announced the acquisition of Edison (dot) to enhance the firm's artificial intelligence driven interactive experiences, while almost simultaneously announcing the acquisition of Molotov SAS, France's leading live TV streaming platform. No, FUBO is not resting on it's growth, nor backing off to its net losses. This management team seems to know what it is trying to do, and is not afraid to get aggressive in order to get there.

FuboTv has guided current quarter revenue toward a range spanning from $205M to $210M, which is well above the $174M that Wall Street was looking for. For the full year, the firm sees revenue in between $612M and $617M, which is also well above consensus view of $568M. Subscriptions of 1.06M to 1.07M are now expected at year's end, which would be 94% growth.

Over the past nine months, the firm's entry for cash and cash equivalents has almost tripled. The same could be said for current assets, as this is the firm's dominant current asset. Total assets have grown 35% over the same time frame. The entry for goodwill is a little large for my liking, but does not appear as if to be abused.

On the other side of the ledger, current assets have been stable, and are not close to current assets in weight. However, total assets have more than doubled over nine months thanks to $312M worth of convertible notes. At least now you know where the cash came from. Total assets less goodwill still outweigh total liabilities less equity, but not in a landslide. 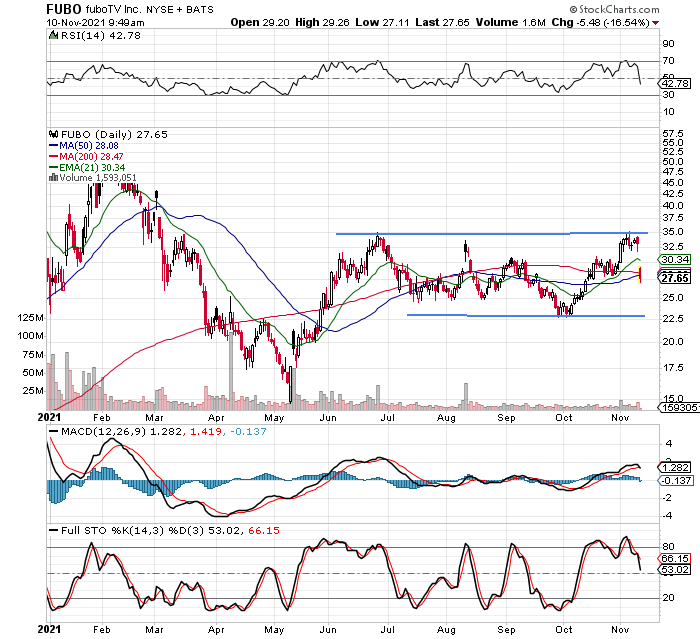 As readers will see, FUBO has been in a basing period of consolidation since June... and still is. Relative Strength, the Full Stochastics Oscillator and daily MACD are all suddenly expressing the weakness that you see in this morning's price discovery. The name is, in my opinion, investable. Should the collision between the last sale, the 50 day SMA and the 200 day SMA, all in the same neighborhood, fail to develop support there is going to be algorithmic support at $25 and worst-case (my opinion)... $22.50.

Long and wrong? You don't have a pivot until FUBO hits $35, at least not right now. Patterns develop in response to changes in price and sentiment. Now there will be an upside unfilled gap, which is a positive. I think I may venture into this name.

Just an FYI, Needham's five star (at TipRanks) analyst Laura Martin maintained her "buy" rating on FUBO this morning, while setting a $60 price target, so the stock does have a high profile ally.

Note: The investor has capped profits on a 100 share long position at $34 (+52.4%) through expiration in February. Worst case? This investor could have to purchase a second lot of 100 shares at $23 in February with the shares trading lower than that, unless said trader repurchased the puts ahead of expiration. In that event, the investor would be long 200 shares at a net basis of $22.65.

Get an email alert each time I write an article for Real Money. Click the "+Follow" next to my byline to this article.
TAGS: Earnings | Investing | Stocks | Technical Analysis | Trading | Digital Entertainment