It seems as though I end up thinking about Tesla (TSLA) all too often. I write about what I think about, so if seeing this name in print appears redundant, please forgive. It's just that in my opinion, at least this name is never redundant, and always seems to be among those stocks where there is at least the most overt opportunity. Ahh, just looked back. I wrote to you on TSLA on both June 12th, and May 21st, so indeed, CEO Elon Musk's creation never strays too far from the top of my, or probably too many other trader's, minds.

Fortunately, the trade that I laid out most recently has worked. You may recall that the June article came on the heels of some aggressive claims on production made by Musk. We had laid out a Bull Call Spread at the time. Long August (23rd) $220 Calls for $20.35 (Latest Value: $30.15), Short August (23rd) $250 Calls at $9.60 (Latest Value: $15.01). If a trader did play along, the net debit at the time of the investment was $10.75. Covering both trades on Wednesday evening would have provided a net credit of $15.14, meaning that the trader made $4.39 or 40.8% on the spread. Myself? Out of the trade already for a good while, for less dough. Never make as mush as I should when I have a winner with this name. There is that other rule. Never second guess a winner. No problem. Never do.

It was June 20th, That Goldman Sachs analyst David Tamberrino opined negatively on Tesla, and the next day, June 21st, that Baird analyst Ben Kallo went completely in the other direction. What Kallo said: "A solid Q2 delivery announcement could set up a positive cash flow quarter and set the stage for shareholder appreciation." It was Kallo's defense of the stock that seemed to be a short-term turning point.

Just a few days later, after the firm won for itself a one-year waiver from the Commerce Department for the import of aluminum from Japan... the government in China decided to rid itself of a list of certified (Electric vehicle) battery manufacturers, allowing an opening for foreign suppliers to make inroads into the country. One a firm-specific positive, the other a positive, not just for Tesla, but for the entire EV industry. Fast forward to earlier this week, Tesla announces production of more than 87K vehicles, and delivery of more than 95K for the second quarter, both totals beating consensus expectations. Interestingly, of those 95K vehicles, 77,550 were of the Model 3 variety. That was ahead of estimates in the 74K range.

I mean, fundamentally, the warts are all still there, but the firm is starting to win the battles that it needs to in order to be viable, or at least viable enough. Q2 earnings are due in early August for the firm. Right now, the street looks for EPS of $-0.54 on revenue of $6.38 billion. That EPS number may be the second consecutive bearing a minus sign, but will be measure against the $-3.06 for the same period one year ago. Revenue at the level expected will come close to 60% year over year growth. Margins for now remain negative, as does levered free cash flow. Debt levels remain sky high, as does short interest. It's that 30% of the float short interest that seems to always save the day for this name when things get rough, as those folks who must come to the rescue are the very folks who have bet against the stock.

Wall Street does not expect to see anything near full year profitability for 2019. That will be a 2020 story best case. Until then, it appears that investors will reward any progress made toward such an end. I have shorted this stock for the last time, or at least for the last time unless the narrative changes significantly. Traders never say "never." 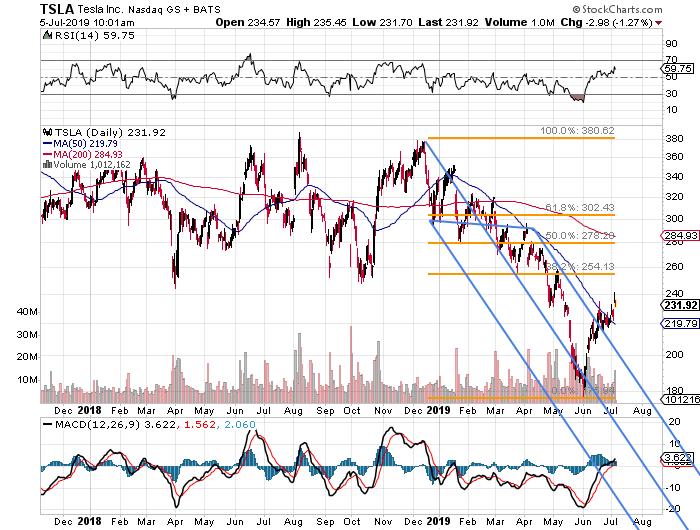 I intentionally left the Pitchfork that I drew for you in June in the picture. One can see how the shares took on not just that resistance, but catapulted off of the 50 day SMA once breached from below. My feeling is that there is a god chance, depending on how those Q2 earnings sound, that this 50 day (blue) line (currently 220) develops as potential support. 38.2% Fibonacci resistance likely arises close to $254.

I am currently flat this name, but an investor looking to improve net basis could realize some nice premiums using the same August 23rd expiration date mentioned above. The long crowd could sell $255 Aug 23rd calls for roughly $10. This short the shares could sell $220 Aug 23rd puts for about $14. I don't know where these traders might be short, but that's not chump change.

A trader far more bold than I, or perhaps more aggressive than I could sell both, creating a short strangle for $24 give or take. That's some nice dough. In theory, the shares would have to move below $196, or above $279 to create negative equity risk. Then again, these shares can move $100 in a month's time, so the danger is real.

Get an email alert each time I write an article for Real Money. Click the "+Follow" next to my byline to this article.
TAGS: Earnings | Investing | Stocks | Technical Analysis | Trading | Automotive | Analyst Actions