Remember the new wave rock band form the 1980's? For those too young, these are the guys responsible for such catchy tunes as "Saved By Zero" and "One Thing Leads To Another." That one reminds me of the prettiest girl I ever saw (she's right behind me). Why are these tunes rattling around within the friendly confines of my cranium on this Tuesday morning? Oh, the connection shouldn't be too hard to come up with.

Let's get more contemporary. I know many investors have at least taken a look at Stitch Fix (SFIX) , the online purveyor of style, of which I know nothing. Stitch Fix reports the firm's fiscal fourth quarter this evening. What I do know going in, is that this stock moves on earnings... it moves a lot, averaging moves of roughly 23% upon release over the past four quarterly reports. So, let's tape on the foil, and get busy.

Two important items the investor must understand. One... Amazon (AMZN) has now started competing directly in this space, but not that aggressively. The Amazon offering, known as Personal Shopper, is directed at Prime members and is targeted at those using the mobile app over the website. One thing leads to another. Two... Stitch Fix invaded the UK back in May, as British consumers do a higher percentage of their overall shopping on-line than do Americans, and shipping distances (Thus, costs and delivery times are more manageable.) are much shorter. This makes this quarter especially crucial in terms of both user and revenue growth.

It's no secret that SFIX has struggled this year. The stock is still up roughly 19% for the year, but as with nearly every stock, the December 2018 equity market meltdown makes this performance accidentally deceptive. SFIX traded this morning 46% below the highs of March 2019. Wall Street is expecting EPS of $0.04 on revenue of $432.3 million. The revenue number would be good for year over year growth of 35.8%, much higher than the mid to high 20%'s that the firm has been averaging, but then again, this includes their first full quarter doing business in the UK, so seeing a pop is not just priced in, it's necessary. The earnings number would be down significantly from the $0.17 that the firm put to the tape a year ago.

What may be more important than actual financial performance for this quarter will be active user growth, as that number has slowed more so than revenue growth in the U.S., meaning that the already converted like the service, but should this turn out to be faddish, this may be seen by the investing community as unreliable.

This name has seen consistent sales growth. That said, gross profit margin has started to slide, and operating margin, in the third quarter actually turned negative, leaving the firm with reduced net income on the already mentioned higher sales. That's what made exploring new markets (such as the UK) necessary.

On the bright side, the firm had (at least three months ago) plenty of cash on the balance sheet, and no debt, hence no reliance upon goodwill to balance the books. Cash Flow from operations has been positive, yet the shares do appear overvalued by traditional metrics. SFIX trades at 65 times forward looking earnings. Investors should be aware that roughly 40% of the entire float is held in short positions, which is massive. Speaking just for me, I tend to shy away from shorting equity outright once short interest moves beyond the 7% to 8% threshold.

What this means is that almost regardless of performance or guidance, a tremendous percentage of the shares available for trading are in effect nothing more than already clocked buy tickets. Traders can never anticipate a short squeeze, but they certainly should not overlook the possibility around scheduled news events. 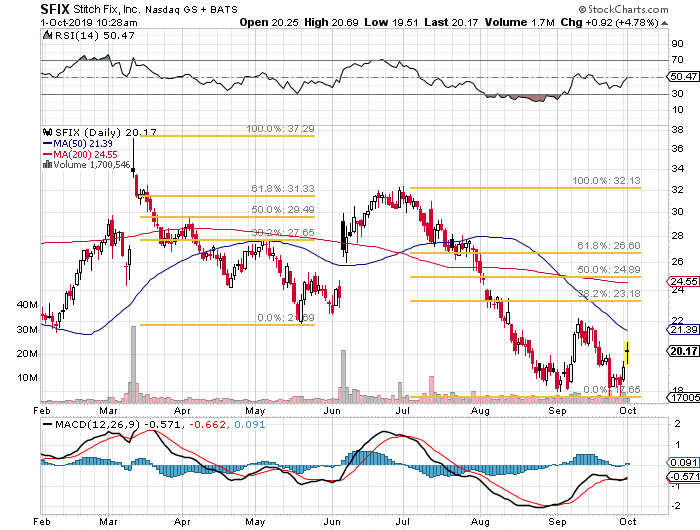 One can see that as the value of these shares has decayed that Fibonacci levels have loosely come into play. One also sees the proximity this morning of the 50 day SMA at $21.39, and twice tested support just below $18. I have an idea that will try to capture some of a positive reaction to this evening's results at reduced risk.

Notes: The purchase grants the investor the right to purchase 100 shares of SFIX on Friday if that makes sense. The sale finances most of the purchase while exposing this investor to potential equity risk at the $18 level this Friday as well.

Worst Outcome: The trader ends up long 100 shares at a net basis of 18.35, with the shares trading below that level.

Get an email alert each time I write an article for Real Money. Click the "+Follow" next to my byline to this article.
TAGS: Earnings | Investing | Options | Stocks | Technical Analysis | Trading | Apparel

Homebuilder Lennar Is Poised for an Upside Breakout

I feel good in recommending the long side of LEN at current levels.

A decline back to the $7 area or even lower is possible in the weeks ahead.