Lockheed Martin (LMT)  shares popped immediately on the earnings news. Then they sold off. Up or down, I mean this has been a wildly profitable long, so I can not judge one who rings the cash register. That said, this is a good stock, and a good company. I often tell you not to fall in love with individual stocks, so with an effort not to break my own rule, I will now count the ways that I really, really just like Lockheed Martin. Let's get after it.

For the firm's fourth quarter, Lockheed Martin reported EPS of $5.29, both a solid beat of consensus view and 20% earnings growth from Q4 2018. This would be a second consecutive quarter of accelerating earnings growth in an otherwise tough earnings environment. Revenue generation printed at $15.878 billion, also easily beating expectations. This number was good for 10.2% annual growth. Let's take a look under the hood.

Aeronautics, the firm's largest business line contributed revenue of $6.381 billion, growth of 8.5%. This is the line that produces fighter aircraft. For the full year 2019, Lockheed Martin delivered 134 (51 for the quarter) F-35 fifth generation fighters to the U.S. military and U.S. allies, a 47% increase from 2018. The unit produced $679 million in operating profit for quarter just ended, up $50 million from a year ago.

Missiles and Fire Control generated $2.769 billion in revenue, +14% from a year ago. However this unit produced just $348 million in operating profit, -7.4% from a year ago as development of some new hypersonic weapons systems under development (PAC-3 Interceptor, THAAD missile defense) worked to squeeze margin just a bit in the space.

Last, but not least, Space printed sales of $2.839 billion, up an even 14% from the comparable quarter last year. This group includes the satellite program and other hypersonic weapons under development. The unit managed however, to grow operating profit 16% to $260 million.

For the coming year (2020), Lockheed Martin guides sales to $62.75 billion to $64.25 billion, above industry view of roughly $62.6 billion. That's a positive. However, as already mentioned, some programs under development will potentially slow earnings growth. The firm guides full year EPS to $23.65 to $23.95, which is below the $24.22 that Wall Street is looking for.

Of course a number of issues could impact forward looking performance when you happen to be one of America's favored defense and aeronautics names. Among those would be tensions or lack there of not only in the Middle East, but around the globe, which impacts not only domestic demand but international demand as well. Then there is always the uncertainty of the domestic electoral season. Obviously under the current administration, defense spending has been a focus. Then there are supply chain issues impacted not just by global trade, but also by the exclusion of Turkey from the F-35 program.

For the record, the firm expects to deliver another 141 F-35's in 2020. You may recall that the F-35 still has not been cleared for full-rate production, and the Pentagon has indicated that this decision may not come until January... 2021. 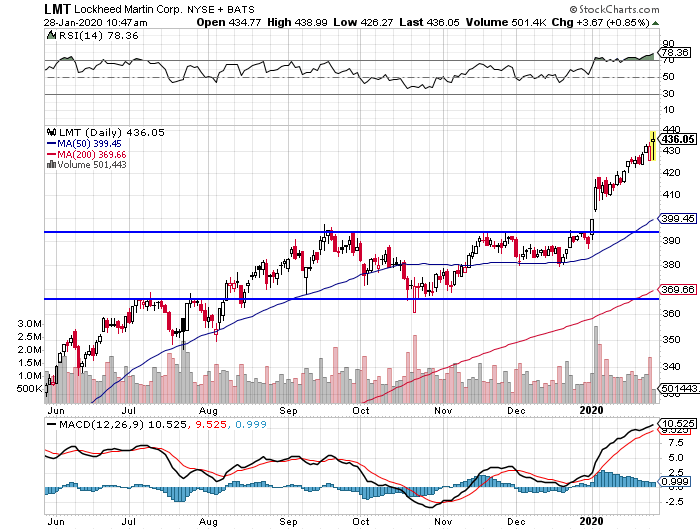 What I see is a four month period of sideways consolidation that came itself after a tremendous increase in price over the first half of 2019. The pivot that produced this (I believe) currently not yet completed breakout occurred at the $394 level just as the calendar turned to 2020. It would not surprise me, nor would it shake me out if the shares were to struggle in the short-term. Both the daily MACD and Relative Strength indicate a technically overbought condition.

What A Trader Could Do...

If already long, June $470 calls are currently worth a rough $6. Write those? Why not knock $6 off of one's net basis by exposing the position to a potential sale at target. A fearless trader could also sell June $400 puts for more than $8. Should those expire worthless, that's $800 in the pocket for one contract. The trader gets tagged? A net basis of $392 looks good now. Honestly one never knows, though. Probably best if going that route to buy a like amount of puts with the same expiration date, but a lower strike price just so you know where you can get out... just in case. Cover thy tail.

Get an email alert each time I write an article for Real Money. Click the "+Follow" next to my byline to this article.
TAGS: Earnings | Investing | Stocks | Technical Analysis | Trading | Aerospace | Defense