Two big-time firms on Wall Street, Goldman Sachs and Morgan Stanley, are bringing the cheer to Nike (NKE) bulls this holiday season. As we slide into the back half of the first week of December, Goldman upgraded shares of Nike to 'Conviction Buy' Thursday morning with a $112 price target. That implied a 16.5% to 19% upside in shares. The difference in those two values draws from the potential different measuring points. Do you measure from yesterday's close or today's open given the upgrade occurred overnight? I'm of the mindset you roll with the potential that you could make reacting to the recommendation, therefore, I would use today's open when accessing upside potential.

Morgan Stanley's optimism exceeds Goldman's. Add another $6 to that price target as the analyst views Nike's accelerated move to DTC (direct-to-consumer) sales gaining momentum. While digitally-driven sales accounted for only 10% of FY19, expect that number to increase significantly over the next few years. As we've seen in retail already, successful digital transformation can make you, but if execution flounders, it can break you. Walmart (WMT) and Target (TGT) are great examples of making successful transformation while Macy's (M) gives us a look at what can happen when it drags.

Nike is a name that draws a good amount of business from China. Bulls and bears will both have to contend with the continued on-again, off-again trade deal, but after examining the correlations between the S&P 500, China, and Nike, I'm not seeing extra overhang on Nike shares when talks of a deal stalling hit the press. In other words, I believe the risk to be overblown because it attracts eyeballs. Traders don't seem to care.

The company may be able to snag some share away from Under Armour (UAA) as the competitor deals with an accounting probe. The probe deals with past sales recognition, but I don't believe the findings will have much, if any, impact on current business or even the share price of Under Armour. Of all the reasons to buy Nike, this isn't one of them.

After a 26% move higher in 2019, it's fair to say this has been a good year for Nike. The stock only put in four poor weeks during the year. Unfortunately, if you were long, those weeks hurt to the tune of 7% to 10%. The most amazing feature about the stock has been its resiliency. Each of those large drops was recovered in six weeks or less, so we haven't seen much in the way of bagholder creation this year. 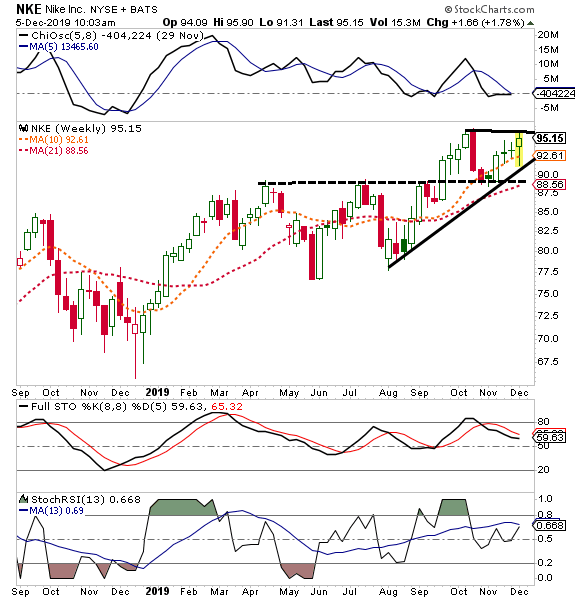 The current resistance on the stock sits at $97 with support around $92.50 followed by $88.50. We're close to a break, so I'd be patient and wait for it to happen. If I wanted a bullish play on the name, then I'd consider a bullish put spread targeting the $92.50 level as the short strike and $87.50 as the long put strike. The thought process is the stock will bounce off one of those two levels. If $92.50 fails, then $88.50 should hold and act as a springboard back to the $92.50 level. The market simply isn't strong enough heading into the end of the year to chase the upgrade without technical confirmation, and we won't get that confirmation until we close above $97 on a weekly basis.

In the end, I'm either waiting for confirmation or considering a bullish put spread on the long side. If I want to look short, then I'm eyeing a break of the $92.50 level with a downside target of $4 to $5 either short the stock or via puts. Given the propensity for this to bounce, I'd define my risk with a long put or long put spread.

Get an email alert each time I write an article for Real Money. Click the "+Follow" next to my byline to this article.
TAGS: Investing | Stocks | Technical Analysis | Trading | Sports business | Consumer Products | Stock of the Day

Hopeful Bulls Must Deal With the Cold, Hard Reality of an Economic Mess

What's going to determine where the market is heading is economic news, the Fed's stance on fighting inflation, and the upcoming earnings season.

Fed behavior has appeared panicked, and rushed if anything, and has appeared in such a way as if it had been conducted by a lumberjack more so than by a surgeon.