Sequence? First the closing bell rang its last. Sprint (S) closed at $4.80 in New York. As far as I can tell, The Wall Street Journal broke the news. A U.S. District Judge would rule in favor of the acquisition of the firm by T-Mobile (TMUS) in a $26 billion deal (at least initially) that had been first announced roughly two years ago. The last sale for Sprint that I saw myself in overnight/pre-regular session trading on Tuesday was $8.43, up 75% from that closing bell price. I am in neither stock, though I am invested in the telecom/domestic 5G space through both Verizon (VZ) and AT&T (T) , so I have no fight here, but one does have to wonder how news breaks many, many hours before the news actually breaks.

Tuesday morning. U.S. District Judge Victor Marrero has approved the pending merger between T-Mobile and Sprint over the objections of 13 states and the District of Columbia that had argued against such a deal on the basis that this union could lead to anti-competitive behavior. At the core of the issue was whether or not Sprint could remain a long-term national player as an independent. The states argued that Sprint could, the judge thought otherwise. The deal would still require approval from the California Public Utilities Commission.

After the judge's decision had been made public, both New York Attorney General Letitia James and California Attorney General Xavier Becerra made statements in disagreement, and indicated that perhaps there were still options including appeal at their disposal. While the ball is rolling, this may still not be a done deal.

You likely will recall that both the Department of Justice (DOJ) and the Federal Communications Commission (FCC) had approved the deal a year ago after securing concessions including the $5 billion sale of assets to Dish Network (DISH) , which would then compete as a cellular service provider. This part of the deal requires that the new combined T-Mobile sell certain airwaves as well as roughly 9 million user accounts to Dish. In addition, the merged firms have committed to roll out a 5G network withing three years of closing that would blanket 97% of the U.S. population with available coverage.

In addition, to get the deal to the tape, Sprint agreed to sell Boost Mobile, and Virgin Mobile among other prepaid cellular businesses. The argument brought by the states that objected in short states their belief that Dish fails to become a major player nationally, that Sprint could continue on, and that with three major players instead of four, that consumers would ultimately be hurt. The judge felt that the states had failed to prove their case that the business will play out this way.

Is There a Trade? 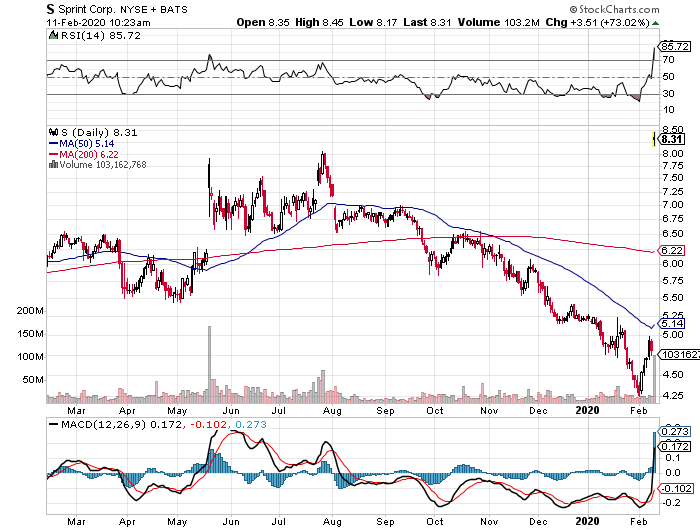 Well, if one is long the stock, it's time for a victory lap for hanging on for so long. At up more than 70% on the day, and with a Relative Strength reading that suddenly stands at 85, traders, I would think, might cash their chips and move on to the next thing, unless of course one is in the name with a thought toward investing in the merged operation.

Get an email alert each time I write an article for Real Money. Click the "+Follow" next to my byline to this article.
TAGS: Mergers and Acquisitions | Investing | Stocks | Trading | Technology | Telecommunications | Telecom Services