At first I thought to myself... these numbers don't count. They are for the most part, pre-Covid-19. Lululemon Athletica's (LULU) fiscal fourth quarter ended on February 2nd. I thought that this discounts the past performance, and the firm was unable to provide forward guidance, which is certainly understandable. The I looked at a few other metrics. The composition of sales. The balance sheet. I remembered something a friend in Italy mentioned the other day about consecutive days spent in sweatpants. I decided to take another look. After all, this name is a past Sarge fave, and has been good to me. I owe the company that much.

For that fiscal second quarter, LULU reported EPS of $2.28, which did beat expectations. This came on revenue of $1.4 billion, up 19.7% year over year, and also a beat. Part of the story of why there might be a reason to be in this name is told in the comp sales. Total comp sales were up 20%. The firm drives 88% of its revenue in North America. North America is pretty much on lock-down. The firm had originally set a date of April 5th to reopen stores in both North America and Europe. That date at this point, seems unlikely. That's a reason to sell. However, when broken down, comp store sales only increased 9%, while direct to consumer sales soared 41%, which is obviously the way most consumer not only prefer to but must shop at this point.

In terms of execution, margins were good. Operating margin improved to 29.8% as operating income increased 26% to $416.5 million. Gross margin increased as well, to 58%. Though guidance can not be provided, the firm did say that except for one location, all stores in mainland China were now open for business.

Lululemon Athletica has a solid balance sheet that includes a cash position of $1.1 billion, and absolutely no long-term debt. A number of analysts have opined on the name. I tried to cherry pick the ones that I consider to be upper echelon members of that community. In reaction to the numbers, on Friday morning, Oppenheimer's Brian Nagel maintained his "Buy" rating. Nagel does not have a price target. Citigroup's Paul Lejuez also a "Buy" rating, and with a price target of $230. It should be noted that ahead of this earnings report, Morgan Kimberly Greenberger, who I have a ton of confidence in, rated LULU at a "Hold", which was a reiteration. Greenberger price target is just $148.

My thoughts. I like LULU. I think the firm is very well run. I think the firm is structured to survive well in a tough environment. Is "survive well" a good enough reason to allocate capital? Not amid this action. We are about an hour into what feels like a "risk-off" Friday. There could be reason for a positive algorithmic reaction should the House of Representatives pass the fiscal support package, but then again, this may be priced in. That leaves end of month re-balancing as the next positive catalyst. In between here and there, a lot of news could break, and there is at least a pretty good chance that some of that news will be negative. 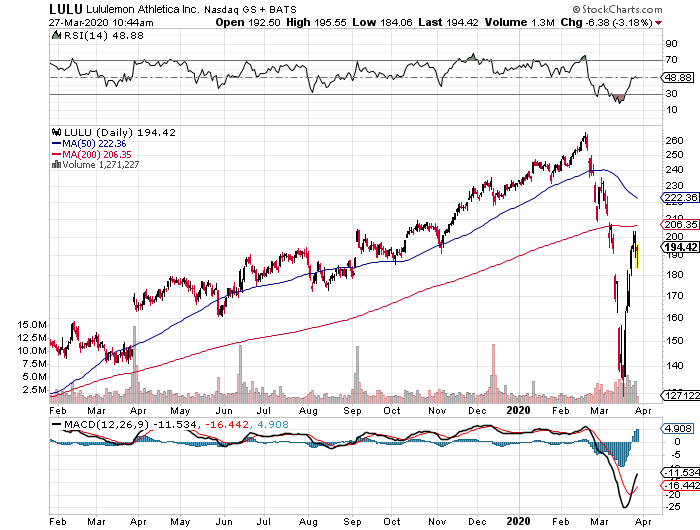 Get an email alert each time I write an article for Real Money. Click the "+Follow" next to my byline to this article.
TAGS: Earnings | Investing | Options | Stocks | Technical Analysis | Trading | Apparel | Retail | E-Commerce